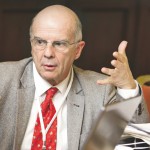 As the situation continues to worsen in Greece, many decided to skip 2013 and go directly to 2014, hoping that it might be better. The air of Athens is full of wood smoke as many inhabitants cannot afford  the highly taxed heating oil. Many apartment buildings and houses did not purchase heating oil and instead used wood or gas heaters and the fortunate ones, their fireplace. Death became expensive as many people lacked money to bury their relatives. Bodies started piling up in the refrigerators at the morgues. Fortunately the Church decided to accommodate the situation by providing free burial in some cases. Many households cannot even afford to pay their electricity bills that have become so expensive that they resemble a second rent. People scavenging the garbage cans for food  is now considered as something normal, as is the distribution of free food to the needy. And the State continues to strangulate its citizens in order to save the country. To save it from what?

At the same time armed violence has started in the Athens area. Fifteen armed attacks took place  two weeks ago almost on a daily basis. Firebombs were thrown on offices of the government parties as well as to apartments where pro-government journalists were living. A machine gun attack was also made against the main offices of the New Democracy Party and the attacks culminated with a bomb that went off at the Athens Mall. Fortunately not one single person was injured in these attacks. Theories on who was behind these attacks were many. According to one school of thought it was the deep State who wanted to terrorize the population by such acts, according to another one it was the usual terrorist organizations. Responsibility for the attack on the Mall was assumed by the Organizations  entitled “Wild Freedom” and  “Instigators of Social Explosions” in a carefully worded statement that condemns consumerism,the oppressive measures taken by the State against the people, stresses how the Organizations went out of their way to avoid casualties and states that it will continue such attacks .It might be premature to consider these attacks as the beginning of an armed struggle but it cannot be entirely excluded. Historically speaking, the Greek people have never revolted en masse, as was the case in Romania with the overthrow of the Ceausescu regime. The war of independence of 1821 was organized by the warlords of the time with the support and participation of the Greek people, the resistance against the German occupation was organized by the pro-communist EAM-ELAS and by the nationalist EDES. The Greek population participated in demonstrations against the occupier, acts of sabotage, but not so much in armed conflict. Resistance against the military junta of 1967 was undertaken by a few resistance groups like Democratiki Amina,who placed explosive devices here and there. However the population of Athens came out  for the Polytechnical School uprising in November 1973. Since the current Athens Government insists on implementing the measures that strangulate the people of Greece, it is quite likely that armed violence will increase, as much as such acts are  condemnable.

In the meantime Athens went through a series of strikes, the subway was shut down for 8 days until the Government decided to mobilize the strikers. However the buses and trolleys continue their strike while at the same time the farmers are preparing theirs. On the external front the IMF continues to admit that it has made mistakes and that less austere measures should have been adopted in Greece while the Greek regime refuses to ask for indemnization for the mistakes made. The leader of SYRIZA Alexis Tsipras visited the USA where he clarified in very eloquent speeches the position of his party on the serious problems that Greece faces. In his speech at the Brookings Institute he said that “SYRIZA will keep Greece in the Eurozone. But this does not mean the acceptance of stupid and inhuman policies that are imposed upon us by today’s self-destructive leaders of the Eurozone. In order to remain in the long term in the eurozone and for it to survive,we need a change of plan. We need a reassessment of our strategy to combat the crisis. Not on the level of Greece but on the level of the European Union……” So this means that if the Troika insists in implementing measures that are destroying Greece, then Greece would leave the Eurozone. Dimitris Kazakis, head of the EPAM party (Popular Front) continues to combat the useless measures adopted by the Athens regime that are strangulating the Greek people by asking them to disregard them and by advocating a permanent general strike. He is also advocating a gradual withdrawal from the Eurozone. EPAM has  organized activities that lessen the sufferings of the average Greeks like reconnecting electricity, free legal advice, medical care, cheap food markets etc.

But for the moment, collective stupidity continues to dominate the Greek tragedy. Nobody wants to correct the mistakes made, neither the EU, the IMF or the European Central Bank. And of course we do not mention the Athens regime which is collaborating in the destruction of the country that supposedly it represents. And as long as this happens the human suffering will continue to increase.

Unfortunately, sooner or later the situation in Greece will explode. And when that happens, it will not be the fault of the scapegoat that is called “terrorism”.