Matt Yglesias, who just spent time in Argentina, writes about the lessons of that country’s recovery following its exit from the one-peso-one-dollar “convertibility law”. As he says, it’s a remarkable success story, one that arguably holds lessons for the euro zone.

I’d just add something else: press coverage of Argentina is another one of those examples of how conventional wisdom can apparently make it impossible to get basic facts right. We keep getting stories about Ireland’s recovery when there is, in fact, no recovery — but there should be, darn it, because they’ve done the “right” thing, so that’s what we’ll report.

And conversely, articles about Argentina are almost always very negative in tone — they’re irresponsible, they’re renationalizing some industries, they talk populist, so they must be going very badly. Never mind this: 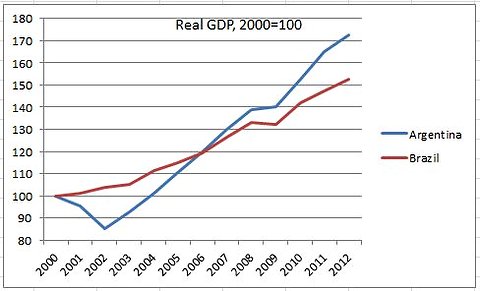 Just to be clear, I think Brazil is going pretty well, and has had good leadership. But why exactly is Brazil an impressive “BRIC” while Argentina is always disparaged? Actually, we know why — but it doesn’t speak well for the state of economics reporting.