In Solidarity with the people of Turkey 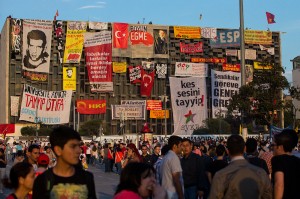 We would like to express strong support for the struggle of our comrades across Turkey. They fight the repressive and authoritarian neoliberal regime of Recep Tayyip Erdoğan and AKP, who declared open war on the citizens of Turkey by crackdown on peaceful protests. We believe that we are all a part of the same general struggle against neo-liberal capitalism and its violation of economic, civic and social rights.

The protests began as an anti-capitalist, environmental assembly of several hundred citizens trying to prevent the destruction of Gezi park: one of the remaining symbols of left activism, the LGBT community and other progressive forces in Istanbul. State repression has provoked a mass rebellion against the government, which is joined by more and more people everyday, including minority groups, trade unions and labor movements.

Gezi park is becoming a new Tahrir Square. It follows the path taken by mass movements all over the world in the past two years, from Indignados to Occupy and the struggles in Greece. The mass trade unions have already embarked on a two day general strike, demanding an end to repression against the popular movement. The situation escalates every hour. It is not just a protest. It is a popular uprising demanding radical change.

The citizens of Turkey gives us an example of how we must all stand together against hegemonic elites that threaten every kind of community and common good. None of the Balkan countries is exempt nor safe from capitalist autocrats and neoliberal politices. Fighting our own battles and struggles is the best way to show solidarity with the people in Turkey.

The struggle of the people of Turkey is our struggle. We must all put an end to the neoliberal politics of party elites that try to control all public affairs, and thereby betray the people that brought them to power through democratic means. With such actions the Erdoğan regime yet again puts its legitimacy into question, and so we stand with the citizens of Turkey to assist them in their struggle for equality and freedom.

We condemn the attempt of nationalist groups and economic and political elites in Turkey and beyond to present – under the alleged plea for secularism – the uprising in Turkey as a struggle against Islam. This is a struggle against neoliberalism. This struggle, which the Turkish people fight with extreme courage and resolution, we all need to advance in our countries.

We appeal to all the oppressed, cowed, exploited; to citizens, workers, students and all whose fate and freedom is determined by repressive apparatuses that wear the mask of empty promises of development and prosperity. We should all stand with the comrades from Turkey and firmly say no to repression and brutality. Solidarity is our strength – the struggle continues!