The battle for SYRIZA goes on

Greece”s Coalition of the Radical Left, known as SYRIZA, held its first congress on July 10-14. SYRIZA shocked Greece and all of Europe in the spring of last year, when it nearly won two national elections–it fell just short of the center-right New Democracy party and pushed the main center-left party PASOK into a distant third place. SYRIZA”s appeal was its uncompromising opposition to austerity policies encapsulated in the so-called Memorandums negotiated with the “troika” of the European Union, European Central Bank and International Monetary Fund. The Memorandums bailed out Greece”s financial system, but on the condition of devastating cutbacks, tax increases and layoffs.

Greece has experienced new struggles against austerity in recent months, particularly surrounding the New Democracy-led coalition government”s attempt to close down the state TV and radio broadcaster ERT. This revival of resistance was the setting for the debates about the future of SYRIZA that led up to the first Congress.

Last year, from November 30 to December 2, SYRIZA held a delegated conference intended to prepare for the first Congress this

year. Voting at the conference made it clear that SYRIZA has two main components: a moderate majority camp, with about three-quarters of the delegates, headed by leaders of Synaspismos, the main group involved in the formation of SYRIZA; and the Left Platform, with about a quarter of the delegates, mainly composed of a left-wing current within Synaspismos and a coalition of three revolutionary groups.

Panos Petrou is a member of the socialist group Internationalist Workers Left (DEA), another of the organizations to co-found SYRIZA in 2004 and a leading force in the Left Platform today. He debates over political and organizational questions in the lead-up to the Congress and at the Congress itself–and draws up a balance sheet of the outcome. 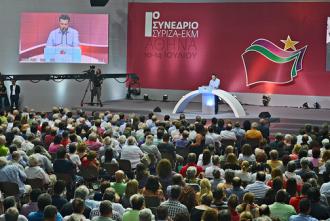 THE FIRST congress of SYRIZA, held from July 10 to July 14, came at a very critical point.

In June, the coalition government”s closure of the public TV and radio station ERT provoked an occupation by workers, which in turn produced a huge wave of solidarity and revitalized the resistance movement against austerity.

This struggle caused a serious crisis for the government. The Democratic Left–known as DIMAR, a center-left party that formed in 2010 as a right-wing split from left reformist party Synaspismos, the largest group in SYRIZA–withdrew from the coalition government, leaving behind the conservative New Democracy (ND) and the main center-left party PASOK, with, between them, a bare majority of 153 members of parliament out of 300.

What”s more, the government has pushed through further massive layoffs in the public sector, provoking a new round of struggles this spring–another one-day general strike, several sectoral strikes and mass demonstrations by different groups of workers–that may reach a new climax, if not during the summer, than certainly in the fall.

Against this background, SYRIZA faces this question: How can the radical left claim governmental power without betraying its principles? The question can be answered concretely by looking at SYRIZA”s alliances, its program, its vision for how it will win government power and what the call for a “left-wing government” would mean in terms of its tasks and duties.

In the months leading to the July congress, the SYRIZA leadership, representing the majority current, gave many indications that it is moving further toward a moderate approach on these issues.

For example, many leading SYRIZA members now talk about how, in the face of a social disaster, we must “save the nation first”–by which they mean that radical left-wing policies and a socialist perspective must be put aside to the future in order to deal immediately with the crisis.

Following this goal could put everything SYRIZA has stood for on the table. In social terms, it could mean a compromise with sections of the local or European ruling classes toward a project of restructuring the Greek economy (advocates claim such a project would be guided by the aims of “social justice,” but that is a utopian impossibility in a time of capitalist crisis).

In political terms, the proposals of the majority could lead to an alliance with center-left forces like DIMAR or offshoots from PASOK. One leading SYRIZA member has gone even further, discussing the possibility of a “national salvation government” that excludes only the neo-Nazis and the “far-right pro-Samaras faction” of New Democracy!

The Left Platform tried to counter the proposals and positions of the majority during the Congress. The Left Platform is mainly made up of the Left Current, a tendency representing a left minority within Synaspismos; the Red Network, a front that brings together three revolutionary organizations–the Internationalist Workers Left (DEA), Kokkino (which means “Red”) and the Anti-capitalist Political Group (APO); plus unaffiliated activists within SYRIZA.

The Left Platform articulated its different political direction in the form of amendments put forward as an alternative to the main political documents presented to the Congress by the majority.

The first amendment was to the draft declaration of principles of the party–the Left Platform proposed the need for a “second wave of radicalization” for SYRIZA, both in terms of its program and its involvement in the resistance movement.

On the document outlining the party”s political positions,

we proposed four amendments on the following subjects:

— SYRIZA should repudiate the entirety of Greece”s debt, support the cancellation of all loan agreements with the troika, and be prepared to use ending all payments if necessary to achieve debt cancellation.

— SYRIZA should support nationalization under workers-popular control of the whole banking system and all strategic sectors of the economy, as a necessary means to meet workers needs and confront the attacks on the working class by the capitalists.

— SYRIZA should call for a left-wing government that must be ready and prepared for a rupture with the eurozone and the European Union. There must be a clear and public commitment to reverse austerity “by any means necessary,” including an exit from the eurozone to counter the blackmail of the EU.

— SYRIZA should stand for a united front of left-wing parties, including the Communist Party and ANTARSYA, but refuse to cooperate with any political forces or leading politicians who carried out or accepted austerity policies, including DIMAR. We must aim for a left-wing government and are not open to alliances with center-left parties, “democratic” center-right formations or right-wing parties that are opposed to the Memorandums.