Warren Buffett, probably the world’s most successful investor, has said that anything good that happened to him could be traced back to the fact that he was born in the right country, the United States, at the right time (1930). A quarter of a century ago, when The World in 1988 light-heartedly ranked 50 countries according to where would be the best place to be born in 1988, America indeed came top. But which country will be the best for a baby born in 2013?

To answer this, the Economist Intelligence Unit (EIU), a sister company of The Economist, has this time turned deadly serious. It earnestly attempts to measure which country will provide the best opportunities for a healthy, safe and prosperous life in the years ahead.

Its quality-of-life index links the results of subjective life-satisfaction surveys—how happy people say they are—to objective determinants of the quality of life across countries. Being rich helps more than anything else, but it is not all that counts; things like crime, trust in public institutions and the health of family life matter too. In all, the index takes 11 statistically significant indicators into account. They are a mixed bunch: some are fixed factors, such as geography; others change only very slowly over time (demography, many social and cultural characteristics); and some factors depend on policies and the state of the world economy.

A forward-looking element comes into play, too. Although many of the drivers of the quality of life are slow-changing, for this ranking some variables, such as income per head, need to be forecast. We use the EIU’s economic forecasts to 2030, which is roughly when children born in 2013 will reach adulthood.

Despite the global economic crisis, times have in certain respects never been so good. Output growth rates have been declining across the world, but income levels are at or near historic highs. Life expectancy continues to increase steadily and political freedoms have spread across the globe, most recently in north Africa and the Middle East. In other ways, however, the crisis has left a deep imprint—in the euro zone, but also elsewhere—particularly on unemployment and personal security. In doing so, it has eroded both family and community life. 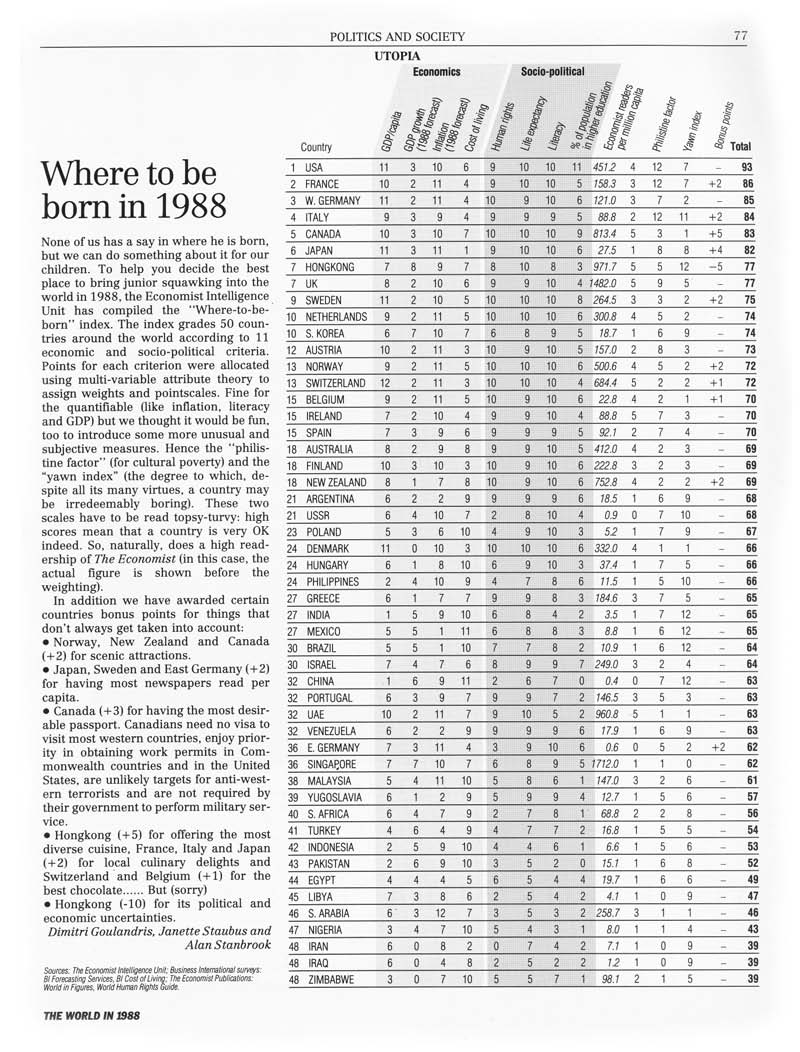 What does all this, and likely developments in the years to come, mean for where a baby might be luckiest to be born in 2013? After crunching its numbers, the EIU has Switzerland comfortably in the top spot, with Australia second.

Small economies dominate the top ten. Half of these are European, but only one, the Netherlands, is from the euro zone. The Nordic countries shine, whereas the crisis-ridden south of Europe (Greece, Portugal and Spain) lags behind despite the advantage of a favourable climate. The largest European economies (Germany, France and Britain) do not do particularly well.

America, where babies will inherit the large debts of the boomer generation, languishes back in 16th place. Despite their economic dynamism, none of the BRIC countries (Brazil, Russia, India and China) scores impressively. Among the 80 countries covered, Nigeria comes last: it is the worst place for a baby to enter the world in 2013.

Quibblers will, of course, find more holes in all this than there are in a chunk of Swiss cheese. America was helped to the top spot back in 1988 by the inclusion in the ranking of a “philistine factor” (for cultural poverty) and a “yawn index” (the degree to which a country might, despite all its virtues, be irredeemably boring). Switzerland scored terribly on both counts. In the film “The Third Man”, Orson Welles’s character, the rogue Harry Lime, famously says that Italy for 30 years had war, terror and murder under the Borgias but in that time produced Michelangelo, Leonardo da Vinci and the Renaissance; Switzerland had 500 years of peace and democracy—and produced the cuckoo clock.

However, there is surely a lot to be said for boring stability in today’s (and no doubt tomorrow’s) uncertain times. A description of the methodology is available here: food for debate all the way from Lucerne to Lagos.