Note from the LeftEast editors: this is the reply of Yanis Varoufakis to the Open Letter by George Souvlis and Samuele Mazzolini about the Democracy in Europe Movement 2015 DiEM25, which appeared earlier this week on LeftEast. Varoufakis’s reply first appeared on the personal blog of Yanis Varoufakis.

Shortly after DiEM25’s Rome launch, I received a splendid Open Letter from George Souvlis and Samuele Mazzolini. It reminded me of another such letter I had received from John Malamatinas prior to DiEM25’s Berlin launch. George and Samuele raise crucial questions about DiEM25 and our project to democratise Europe. Here comes a feeble attempt to answer them.

What escapes us is who DiEM 25 exactly is and who its ‘enemy’ is meant to be. More precisely, who are you fighting against?

DiEM25’s Manifesto answers as follows: We call on our fellow Europeans to join us forthwith to create the European movement which we call DiEM25

Going beyond the Manifesto, and speaking personally here, DiEM25 would have been unnecessary if:

This degenerate yet incredibly powerful process and its agents (that include the EU bureaucracy and the national elites feeding it while being fed by it) is the ‘enemy’ against which DiEM25 member are banding together.

The ambiguous physiognomy of DiEM 25 is… reinforced by rendering the political affiliation of the people who will join your effort as an irrelevant criterion for their involvement as you literally said that: “We are not a coalition of political parties. The idea is that anyone can join independently of political party affiliation or ideology because democracy can be a unifying theme”… In this way, the nature of DiEM 25 runs the risk of apoliticism…

To invite members across political party affiliations is not the same as inviting them to join an apolitical movement. Political parties in EU member-states have become, like the EU, utterly… depoliticised. There are neoliberal parties implementing the largest tax-payer funded bailouts of private companies (banks!) in history. And left-wing parties implementing the worst austerity in history. This ‘anomaly’ reflects the success the EU cartel has had in de-politicising politics, which means creating a classist, toxic form of unrepresentative, anti-democratic politics.

Furthermore, DiEM25 is founded on the belief that the EU’s cartelised capitalist organisation is unique around the world and that its crumbling packs immense destructive potential (that is also unique globally). Europe’s exceptionalism is, thus, not due to the fact that Europe is great and superior (to other parts of the world, e.g. Latin America, China) but that it is so terribly structured that its inevitable fragmentation will inflict massive damage upon not only Europeans but also the rest of the world. (If, to give an example, the Latin American leftwing governments are now imploding, this has a great deal to do with the failure of Europe to get its act together after 2009, to raise investment, and thus to prevent China’s deflation which, in turn, caused the recessions in Brazil etc.)

If our analysis is correct (and I sincerely hope we are… wrong), we are at a moment in history very much like 1930: Just after the crisis (1929) and in the ‘early’ stages of a slide toward an abyss comprising deflation, xenophobia, hyper-nationalism, competitive devaluations, jingoism etc. What was the duty of progressives in 1930? It was, I suggest, to reach across party affiliations and borders to create a pan-European movement of democrats (radicals, liberals, even progressive conservatives) in opposition to the forces of evil. I very much fear that this is our duty today too.

In this broad context, DiEM25 is not in the business of becoming a confederacy of existing nation-state parties who, courtesy of the transfer of power from the nation-state to the anti-democratic EU institutions, end up with electoral programs which they have no chance of implementing once in government. Nor is it about being yet another leftwing movement that provides a home exclusively to people like myself, and possibly you (i.e. radical critics of globalised and European capitalism) but which fails to bring other opponents of the unfolding process into its ranks so that we can, together, offer meaningful resistance to the emergent misanthropy.

So, make no mistake here: DiEM25 is as political as they come. But to be political in a meaningful manner it needs to appeal across existing political party lines. DiEM25’s deeply political character/project can be seen just by perusing the four principles listed in its Manifesto:

Moving to the European level and considering that the aims of DiEM 25 are limited to the democratic reestablishment of the structures of the EU, do you think that people with such diverse conceptions of democracy can agree on common agendas? We are very doubtful of this.

Allow me to say that the aim of democratisation can never be thought of as ‘limited’. Authentic democracy is an incredibly radical and far-reaching concept. If it is to spread to every social relation, including the workplace, democratisation becomes synonymous to a far-reaching revolution.

On the question of whether I think we can agree on a common agenda, allow me to suggest to you that we do not have the right (even if we have good reason) to be pessimistic. We both have an obligation to understand the obstacles and a duty to adopt Gramsci’s Optimism of the Spirit.

This leads us to yet another strategic issue: what exactly is to be done? It seems that DiEM has put all its bets on the European dimension, entirely bypassing the national one…

I can see why you may think this but I assure you it is not the case: DiEM25 is not neglecting the national, or the regional, dimension. Not in the slightest. Our view on the Europe-Nation juxtaposition is a dialectical one. We reject the standard trade-off theory (common in Brussels and amongst the EU-loyalists) according to which any democratisation of the EU requires further centralisation which, in turn, requires further loss of sovereignty at the national level. In sharp contrast, DiEM25 believes strongly that more democracy at the centre would reinvigorate the nation-state and return more sovereignty to the national parliaments.

Europe’s progressives, you and me included, must make a stark choice quickly. The truly awful EU we have is disintegrating. Are we to help speed up its disintegration, with a return to the nation-state? Or are we to try to stem this disintegration with an attempt at democratising the EU’s institutions? This is the question.

There are good arguments on both sides here. I have personally disagreed with excellent comrades from around Europe on this. But this is fine – progress demands disagreement. DiEM25’s position on the matter is clear, judging by the Manifesto’s proclamation that DiEM25 rejects both of the following options with equal fervour:

You write: Holding both the nation-state and Europe as political horizons does not amount to entrenching oneself behind a form of backward nationalism, as many DiEM followers have suggested.

You are, of course, right – except that no DiEMer I know has said that holding on to the dialectical equivalence of the two horizons amounts to backward nationalism. What we do say is that prioritising the nation-state and calling for a retreat from Europe into its bosom is, indeed, a retrograde step.

The Manifesto explains this well:

“While the fight for democracy-from below, at the local, regional or national levels, is necessary, it is nevertheless insufficient if it is conducted without an internationalist strategy toward a pan-European coalition for democratising Europe. European democrats must come together first, forge a common agenda, and then find ways of connecting it with local communities and at the regional and national level.”

Just because we did not discuss Latin America in the Rome meetings that does not mean that we have ‘blinded ourselves’ to its significance. (As someone that has spent countless hours debating with Ernesto Laclau, when we coincided at Essex, I think I can safely claim not to be guilty of this accusation…)

Is it possible, Yanis, to try to democratise something as big as the EU without previously having created solid democratic structures within your project?

No it is not! DiEM25 must practise democracy and transparency fully within its ranks before it can hope to democratise anything else, let alone… Europe.

Let me convey to you our thinking on this and the problems we are trying to overcome. Our thinking has been, as you suggested, influence heavily by the experience and know-how of the various social movements – after all most of us have been involved in them for many years. Democracy requires institution-building before we it gets to be practised properly.

DiEM25 began life when a small number of people came to the conclusion that it is time for a pan-European movement that traverses both national and political party dividing lines. We put together the Manifesto, as our defining text, by a process of toing and froing. Then we convened the Berlin and Rome launches with as broad a call to European democrats are we could muster. Thousands responded. And thus the usual problem of ‘organisation’ emerged.

We are in the process of developing, amongst our members (i.e. those who joined DiEM25 on our site), our organisational structure (or lack thereof). I am sure that you understand that this can only be work-in-progress. Indeed, if the structure had existed before the members joined, that would have been a glaring contradiction.

The basic idea is to combine coordination and spontaneous order, the physical and the digital.

On the one hand, DiEM25 will have a coordinating committee in every EU member-state, and one overarching pan-European one, that emerge through physical (e.g. ‘town hall’) meetings convened by initiators whose job it will be just to get DiEM25 members into one physical space, before representatives are elected.

On the other hand, we have already initiated our DSCs (DiEM25 Spontaneous Collectives). Here is how it works: DiEM25 members discover each other in their towns, regions etc. and spontaneously form a collective (between 7 and 15 member-strong). Then they act as a unit in any way they think appropriate to promote the Manifesto’s goals. They need not wait for approval from anyone. They have the right to represent DiEM25 (constrained only by the Manifesto’s principles) in any way they want as long as they respect three simple rules: First, they must not collect money on DiEM25’s behalf. Secondly, they cannot form pacts or associations with other organisations or parties. Thirdly, for a DSC member to put something out on behalf of DiEM25, they must have the consent of at least another three members of their own collective.

There is so much more to say. Thank you for your critical questions and the opportunity to think harder and deeper about these crucial issues. Please consider DiEM25 to be your movement too. And if you see we are doing things wrongly, just step in and do it better! 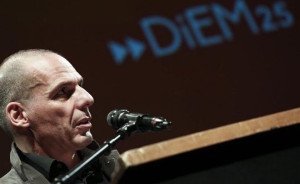 Yanis Varoufakis is the former finance minister of Greece and a key figure in the newly established movement Democracy in Europe Movement 2015 (DiEM25). Before entering politics, he was a professor of economics at the University of Texas, Austin. He is also the author of The Global Minotaur: America, Europe and the Future of the Global Economy.