Note of the LeftEast editors: this article has been published in collaboration with the Serbo-Croat web-portal Bilten.Org and has been translated by and republished with the consent of the author himself.

Although pronounced successful, Belgrade Pride has aroused more interest amongst politicians, than the public and the LGBT community. While politicians didn’t hesitate to express their attitude, the community mostly ignored the event, showing clearly that it is not interested in political images without real solutions. In spite of this, the message that LGBT rights absolutely are not a priority was sent. 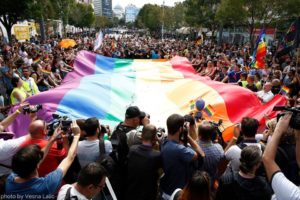 A few days ago Belgrade Pride took place under the slogan “Love Changes the World”, and that was the closing event of this year’s Pride Week. Only a couple of hundred people participated in a walk from Slavija square to Republic square (which is a much smaller number comparing to last year), among whom were the representatives of government, international delegations, but also some members of opposition parties. Central city streets were closed for traffic, while the whole event was secured by five thousand policemen with helicopters. The party on Republic Square ended the parade and the closing remarks by the organizers and city authorities stated that this was yet another successfully organized Pride. How we are to measure the success of this (state organized) Pride is a question that we need to pose.

Although the homophobic discourse wasn’t represented in the public sphere as much as in previous years, the conservative, pro-Russian right definitely used the opportunity to promote itself during the “Week of Family Unity”, which is their answer to Pride. It has become tradition that the day before Pride, with the blessing of Serbian Orthodox Church, a “Family Walk” is organised by the clerical/orthodox movement Dveri with the goal of promoting “traditional family values”. Opposed to other right wing parties represented in the parliament (Democratic Party of Serbia and Serbian Radical Party) that mainly stick to the narrative that “LGBT population mustn’t be beaten, but they can do whatever they want in their four walls”, Dveri still have the loudest pro/family and anti/homosexual campaign, especially in the period around Pride. To clarify, this movement under the leadership of Boško Obradović propagates the notion that “sexual orientation” is not a human right, and targets the LGBT population so it can gain support from homophobic voters.

It should be mentioned that the organisation “Family Union” is an umbrella organisation for a dozen Serbian, but also Russian, groups that advocate the adoption of a “Putin model”, in questions of family and relating to the LGBT community. They are supported by the Serbian Orthodox Church and the slogan of their campaign is “Be fruitful and multiply”. It is not irrelevant to say that, after Pride, around thirty supporters of the “True Serbian Orthodox Church” protested against the manifestation and afterwards, with religious songs, “purified” the place where the party had taken place.

As this year’s Week of Pride was approaching, so the argument was heating up between the representatives of NGO’s and well known activists. Some individuals from activist circles critised sharply the main organisers of Pride Boban Stojanović and Goran Miletić, holding them responsible for continuous growth in numbers of LGBT persons who boycott Pride because it ignores the needs and criticisms coming from the gay community. Predrag Azdejkovic was the harshest saying in an interview for a newspaper Danas that the LGBT community now has a “private enterprise that organises a party on the streets of Belgrade and a concert of Nataša Bekvalac”. If we leave personal confrontations between NGO’s aside, problems around the LGBT struggle are easily identified looking from the outside.
The community itself is almost invisible during the year, except in cases when one of its activists gets attacked and then media report about it for a few days. Initiative to claim public space is very weak, while the forms of gathering between “four walls” (workshops, trainings, cultural events etc.) function more or less perfectly. If we have a declining number of participants in Pride every year, it is the best signal that the vertical approach of solving this problem is not giving any results because when the Parade itself comes on the agenda – representing a controversial political act in the public sphere – the support of wider layers of people is lacking, preceded by bad cooperation between the organisers and the community.

Keeping the struggle in the frame of the dominant ideology leads to its particularisation and limits its reach to the politics of identity. The slogan “Love Changes the World” has a de-politicising tone, and the carnival atmosphere characterises the manifestation as extremely commercial, limiting the whole event to a walk for a walk’s sake. The moment of expanding the field of struggle and putting it in a horizontal plane is left out so the emancipatory potential of solidarity with other oppressed groups is not used. The status of being oppressed is the common denominator that could bring people in an organised united front. This being said, social oppression bars people from self’confirmation on the basis of identity because of the constant overlooking of connection between the class position and representatives of minority groups. If someone has no money to rent an apartment, he/she can’t be gay/lesbian/transsexual in her/his four walls. In that sense, the existing Pride reproduces existing class division.

This is confirmed by the statements of government officials, some of whom participated in the parade this year. The first outed person in a position of a minister, Ana Brnabić, stated that she was going to Pride “to show that Serbia is not homophobic”, as well as that “the demands of the LGBT community are not a priority, but they are important”. These statements are not contradictory, although at first they seem so. Everything is about the people in power trading with LGBT rights depending on the current interest of the government. Holding the parade is of key interest at the moment.

The Chairman of the Council for European Integration Marinika Tepic, beside the congratulations for a successful organization of Pride, said that a “Declaration against homophobia” is being planned as well as a “National Strategy for Combating Violence” that should protect LGBT community from violence and discrimination, but other minorities too. Adopting and implementing declarations of this type without a strong campaign of education from the beginning will not decrease the exposure of LGBT community to violence nor the level of homophobia in society.

The words of prime minister Aleksandar Vučić reflect the current relation of the state towards the LGBT community and Pride itself. Just before Pride he said: “I am not a big fan of this walk, and if I had time I would prefer to go to the wedding of Bratislav Gašić’s son where five times more people have gathered. I say this as a citizen, but also as prime minister, my obligation is to provide safety for all”.

Through this statement, the prime minister distances himself from the LGBT community while clearly positioning himself alongside conservatives in order to show the public that he could stop the holding of the parade. Basically, he allows the parade so that he could present his government to Brussels and Washington as a liberal one when it comes to sexual minorities, while his only goal is to gain political points in the process of political and economic euro-integration. In this context, Pride reproduces the dominant neoliberal pattern because the policy of the organisers is every year based on the help of state authorities so that the walk could be held and success is determined by whether or not someone was beaten by extremists. Display of strong police forces is also a demonstration of power that should intimidate any potential opposition. That is why it is important to ask ourselves what kind of Pride we need in the future. This is where the enormous space is created for the Left to act and formulate a political strategy that would tie indissolubly the struggle for LGBT liberation with the struggle for elementary equality. 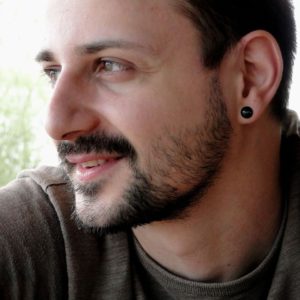 Nikola Živadinović was born in 1987 in Kruševac. He is a worker in a bookshop and a student of business economics. He was active on the left since 2002, as an activist of the feminist organisation ‘Alternative centre for young women’ from Kruševac, and of the Kruševac branch of Marks21. On the internet he writes under the pseudonim Nikola Ćupas. He leads and edits the blog nikolacupas.com.