Dialoguing Between the Posts: Can We Think Postcolonially about Central and Eastern Europe? Perspective from Poland.

Note from the LeftEast editors: we are sharing this video with the kind permission of Mithilesh Kumar. Inspired from the workshop with the same title which took place in Beograde, TISS Patna has designed a series of events on the topic. As one of the groups present at the Belgrade seminar, the LeftEast editorial collective endorses fully this series of events and its courage to break with Cold War taxonomies, methodological nationalism and nesting orientalism, and look for commonalities among different peripheries in the world system. We are proud to feature this and further videos from the event series on our website. 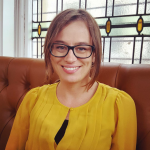 About the Speaker Dr Kasia Narkowicz works on issues of Otherness in Europe, focusing on racism, Islamophobia and gender. She holds a PhD from the University of Sheffield, UK, where she investigated conflicts around religion, race and gender in the Polish public sphere. She has since worked at the University of Cambridge and the University of York and is currently based in Delhi. Her work has been published in journals including Ethnic and Racial Studies, Gender, Place and Culture and Journal of Ethnic and Migration Studies. Kasia tweets at @kasianarkowicz. Website: https://york.academia.edu/KNarkowicz