Call for international meeting, manifestation and solidarity action in Slovenia 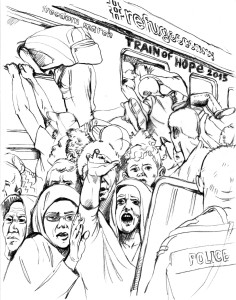 For more than a week the so-called Balkan Route is passing through Slovenia. The Slovenian government intended to impose the entrance quota of 2500 refugees per day. Croatia answered by sending the refugees and migrants over the so-called “Green” border. This controversy between Slovenia and Croatia created dire humanitarian conditions for the refugees and migrants. The Slovenian government used this humanitarian emergency produced by states and what they call a chaotic situation on the Southern border to rapidly militarize the society and call for an EU summit on the Balkan Route.

We are the people daily involved in solidarity with refugees and migrants travelling through Slovenia trying to reach their final destinations. We do not see refugees and migrants as either hopeless victims or as an invasive force but autonomous people with a desire for a better life. What we are perceiving in our day to day engagements on the border is that the attitude of the Slovenian authorities leads to the dehumanization of refugees and migrants and turns this route into a total institution whose aim is to isolate refugees and migrants from the broader society and subject them to procedures of policing, selection and deportation. We also perceive that activities of solidarity by independent volunteers are more and more restricted by authorities.

We believe that the only way to address these dire humanitarian conditions of refugees and migrants is to build relations with them. The solution is not sending people back or subjecting them to a life without perspective in closed refuge centres isolated from broader society. The solution is to build a common European society together, as citizens, refugees and migrants.

We call to meet in Ljubljana, on Saturday 31 of October, 11am to participate in a transnational meeting and manifestation against the militarization of Slovenian borders and the attempts of the EU to break the movement of refugees and migrants. After the manifestation in Ljubljana, we will go together to the border as international independent volunteers to express solidarity with refugees and migrants and to build another, open Europe together.