Men in the Bulgarian Parliament stand behind violence against women

The parliamentary session of the Bulgarian National Assembly, which took place on the 15th of November, and was aimed at voting legislative changes in the Criminal code concerning the criminalization of certain forms of domestic violence, was accompanied by an extremely sexist discussion by MPs. As it usually happens in the Bulgarian Parliament consensus marked the day. Despite various attempts from different parliamentary groups to distinguish themselves from one another, they nevertheless rely on similar, if not identical, positions, disguised in such rhetorical forms that only appear as emerging from divergent sections within the ideological spectrum. In reality, they represent one and the same quite narrow segment of it. At present, the unanimity rests upon the fear that women are actually rising up in order to demand independence, and seeking their rights and liberties outside the chains of the patriarchal order – economic independence from their spouses and the right not to be considered secondary citizens. What we witnessed on November 15, is nothing but  the angst  of male politicians. Angst against a newly opened space, where what was  previously a public sphere  free from women’s protests and contention , is currently thoroughly shaken by our growing discontent with both physical and social violence we experience on a daily basis.

Paradoxically, all of us who stand up against the newly emergent  waves of rampant  sexism, that the political and popular rage against the so-called Istanbul Convention unleashed earlier in 2018, should note that a small battle has been won. We have managed to scare those to whom preserving the existing conditions is of utmost importance. We have disturbed their confidence that the future has nothing different to offer to us and our daughters and no significant changes to the patriarchal order in our country will ever occur. Although still suppressed by their power and the support they maintain, with our anger and actions we slowly but surely have managed to damage the apprehension that we would be conveniently degraded, and weaken the foundations of their dominance. Here are some of the statements, quoted in articles in dir.bg and Дневник (both articles in Bulgarian language). 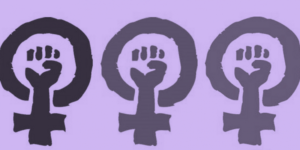 Dimitar Stoyanov, a member of the (neoliberal oligarchic) Bulgarian Socialist Party (BSP), claims: “It often happens that neighbors hear confrontations happening, but what they do not see is that relationship problems are resolved  between the bedsheets at night.” This assertion goes against the call circulating the country for neighbors not to plug their ears off and put a blind eye to abuse, but to step in at the exact moment. Why would women call for that? Because this is how lives could be saved and abusers could be punished.

What was Stoyanov actually stating? He was telling us that despite women’s protests, domestic violence is no different than any other kind of “family” issue, which is easily resolved through a bit of sex. Not only does he neglect the gravity of domestic violence as action and crime, he also reinforces the cliché that physical abuse could be resolved by intimacy in bed. Violence then, takes place firstly through beating and afterwards through sex. The effect of such framing of domestic violence as a “family affair”, is that the woman’s body is turned into an impersonal object twice: first through the beating itself, and the second time, while suffering humiliation through sex after the beating. Furthermore, a woman’s ability and desire to seduce the abuser appear to be her only weapons – the message is: society is not going to help, the state is not going to interfere, and it is only you who bears the responsibility to “reward” the abuser with tenderness, to sensually satisfy him, and even bring him to a point of culmination, despite having to do that with a blackened eye, cracked lips and bruised fingers, you are to do just anything in order not to have to take another hit… until next time.

Stoyanov’s vulgar attitudes towards domestic violence are also embodied in his denial of the fact that violence against women is genuinely gender-based violence. According to him, “domestic violence is frequently provoked by the victim”. His claim that “women chase their spouses with pans” sidetracks, manipulates, and changes the focus of the debate insinuating that women are the factual abusers.

Vezhdy Rashidov, former Minister of Culture and member of the ruling GERB, reached a similar conclusion. He decided to disregard the existing dominant-supresive relations among men and women, demanding that the term “human” should be used instead, continuing once again the long line of his misogyny. Let us quote, “Make laws for the “human”! Humans should be protected!”. Such argument appears as progressive  as it seemingly professes equality between the woman and the man, erasing differences between the sexes that must be taken into account when we speak of equality – together with other “advantages” such as sex, class, race, able bodies and age – and which benefit certain individuals in a society structured by unequal power relations and economic gains but take away from others. This is why talking about individual rights when 90% of the victims of domestic violence are women, and 90% of abusers are men, is an expression of a dangerous misogynistic cynicism disguised in the sensitive rhetoric of “human rights”.

Valery Zheblyanov and Alexander Paunov (both members of the Bulgarian Socialist Party also contributed to the parliamentary meeting. Zheblyanov (as paraphrased by dir.bg “this proposed law is nothing but an extension to neoliberal apprehensions”) and Paunov (“Love is a fragile flower that quickly dies unless it is watered with money. Life is hard when you are poor.”) have both made an attempt to kill two birds with one stone. On one hand, they tried to erase history and conveniently fail to note that some of the most neoliberal politics in our country have been passed  mainly because of the direct and, at times, indirect support of the “socialists”. On the other hand, they try to convince us  that it is namely the poor who are the most frequent abusers of women. What we are not going to fail to notice, however, is that gender-based violence is not a typical feature of the poor, but a result of both specific politics and hegemony. Politics, which denies the existence of gender-based violence and conveniently deprives women of social gains afterwards, forces us into dependency that turns them into hostages to unwelcoming life circumstances, and later – victims of violence.

With their claims, Stoyanov, Zheblyanov and Paunov once again demonstrated that BSP’s history of progressive politics concerning women is neatly erased and conveniently forgotten, while the Party’s members, with their misogynistic speeches and antisocial politics, stand next to some of the most retrograde segments of the far-right.

Redirecting the debate on domestic violence towards the appraisal of Christian values, members of GERB and United Patriots supported their colleagues from BSP. They emphasized the “Christian values undermined by neoliberalism and gender ideology” as Pavel Shopov claims. “Gender ideology”, of course, does not exist, except for when it is used as a rhetoric figure by the far-right as it opposes any ideas concerning social equality, equality of the sexes, as well as non-binary concepts of gender and sex. It is obvious that fear comes from feminism and queer campaigns framed in a not-so-well-crafted comparison with neoliberalism as the latter, and some of the more vigorous and progressive movements within feminism form quite hostile relationships and oppositions, when it comes to political, economic and social ideological programs. Nevertheless, what becomes apparent is that the members of the National Assembly consider whatever happens between men and women as belonging to the “family affairs” and in relation to the church. Even though, according to the Constitution of the Republic of Bulgaria, the State is separated from religion and the Church (and most of the marriages in Bulgaria take place before state institutions and not religion institutions), our representatives in the secular state executive and legislative institutions strongly believe that those so-called “family affairs” need not be regulated or even uncovered in public space. This is how the long-lasting patriarchal concept of “what is personal/private is not political” in reinforced. The argument proposed by Bikov from GERB that “laws cannot establish or strengthen families” is thoroughly irrelevant since the proposed law is aimed at preventing and punishing violence against women, not strengthening families.

All of this is happening while women in Bulgaria are trying to escape namely the kind of framing which emphasizes  individual aspects of domestic violence and denies them any social and institutional support. While women undoubtedly claim that what is personal is also political, representatives of all parliamentary groups -and mostly men at that – are doing their best to convince us of the opposite. It is about time for all people – men and women – to rise against this vulgar misogynistic idea preached by our representatives. In the 21st century, when women work not only in the domestic sphere – still not a well-respected and remunerated labor – but also in the productive sphere alongside with men and having similar political rights as them, the traditional patriarchal family considering the woman a political object as long as she is viewed as a man’s property, cannot and should not be the subject of political actions such as law legislation. It took plenty of protests and fights for women to gain their political rights, and no member of any present political institution has the right to insist on retrograde values and politics. What today’s debate in the parliament shows is that the greatest abusers are seated there. The protest against domestic and gender-based violence will take place on the 26th of November at Eagles’ Bridge.