A Story of one Banner 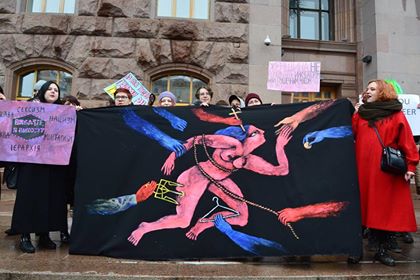 Today on the 8th of March, we, a group of left and anarchist feminists, set out to make visible several problems faced by every woman in contemporary Ukraine. These include poverty and bad work environment, domestic violence and the Church lobbying against the Istanbul convention. But there is one more problem that has become an everyday reality: far right violence against the feminist and LGBT+ activists.

Basically every event addressing these issues, including talks and workshops, is facing threats of violence and actual physical attacks. And this is no news. This is what our banner meant to portray. As a symbol of the far right violence, we have chosen the sign of the National Militias (we are grateful to the Mariupol activists for the idea). National Militias is a state-sanctioned paramilitary corps with links to far right organizations, displaying distinct nazi esthetics and promising to ‘establish Ukrainian order’ in the cities. 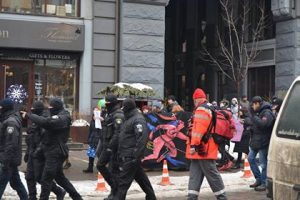 Of course, the far right took our criticism as an insult. But they could not come up with anything better than accuse us of abusing national symbols and attack us. The first attack happened in the beginning of our march, and the police acted as usual: ignored the threats coming from the far right and stepped in only after they used physical violence. We managed to keep the banner, later we unfolded and displayed it again. We asked the police to walk closer by our side, but one of the policemen said in response to my insistence: ‘I am not going to fucking protect you’.

The story seemed to have come to an end, but it was in fact about to reach its climax. When we neared Kyiv City State Administration, a man wearing a police uniform attacked and pushed away Dana, our comrade who was holding the banner. He never identified himself or notified us of any law infringement. Meanwhile another uniformed man snatched our banner and ran away. This second guy looked very similar to Vadym Humen, a particularly brutal law-enforcement officer who participated in cracking down on many protests before, during and after the Maidan events. 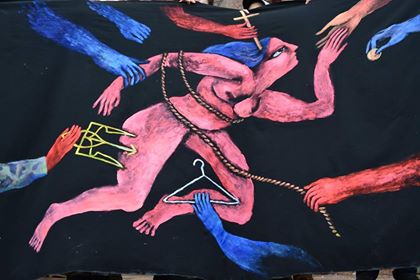 Our attempts to tell the police what happened failed. At that moment we had to think about the ways to get back home safely. A couple of hours later we learned that at least four other female participants of the demonstration have been physically attacked by the nationalists: one got dye poured over her face and the other got sprayed with pepper spray. The organizer of today’s demonstration Olena Shevchenko, chairperson of LGBT NGO Insight, was taken to a police department and accused of insulting national symbols.