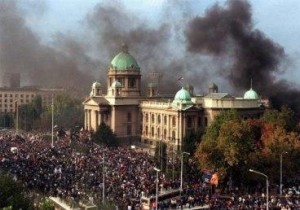 It is 15 years to the day since the toppling of the Milošević regime. In Serbia there is much disillusionment with the results of the revolution. But here are some reasons to continue to celebrate it.

First, as Lindsey German showed at the time in the article posted below, industrial workers were central to the uprising that finally toppled a regime that claimed to defend socialism. This shows that even after years of economic crisis, ideological manipulation and international intervention, the working class remained a central actor in society.

Second, and linked, it was the people of Serbia itself, not international intervention, which was key to the toppling of the regime. Milošević hung on as long as he did in large part because he had been able to, falsely, present himself as a patriot defending the country from external enemies. It is indeed no accident that the only opponent who could beat Milošević in a direct ballot happened to be also someone seen as a nationalist, someone who would not be selling out the country the minute he won (and how untrue that turned out to be too!). This is important given what is going on in Syria now: intervention will not do what the people of Syria could do but for international intervention, which is why it is so important for socialists to remain against their government’s intervention wherever they are.

Third, and perhaps ironic given what I just wrote about nationalism above, the 5th of October revolution in fact broke the back of militant Serbian nationalism. Yes, it was a nationalist who won the election, and, yes, the demonstrators sang nationalist songs from the Second World War outside Parliament on the day. And, yes, most of the prominent opposition leaders had supported in one way or another Serbia’s shameful role in the Bosnian war: let’s not forget that Zoran Djindjić, the darling of the liberals, had visited Bosnian Serb leader Radovan Karadžić in a show of support in Pale in 1994. But the dynamic of the popular uprising in 2000 was such that it defeated the butcher of the Balkans. Liberals now decry the lack of the 6th October, the ‘de-Miloševićisation’ of the state apparatus, and while it is true that the Serbian elite continues to pursue influence and partition in the long term in Kosovo, Bosnia and possibly elsewhere, it has done so markedly less militantly since 5th of October 2000. The reason is simple: the people who united to overthrow the regime had different goals and interests, but their united and collective action to overthrow the regime destabilised and cracked the ability of the state apparatus to intervene outside its own borders in the same way. Importantly, too, workers across the former Yugoslavia celebrated the end of Milošević – which ought to be an important reminder about the Serbian left’s need to remember its internationalist duties.

Fourth, all this should encourage us to keep up the fight against a system that breeds poverty and war. The illusions that existed in “Europe” in 2000 are now being dispelled. We should be careful to explain which aspects of the 2000 revolution are to blame for its failure to bring real change, and illusions in the EU should be among the foremost. The EU has not brought prosperity or peace, and it cannot do so. Look at its undemocratic structures and its weddedness to austerity politics. More than that: do not forget it is an imperialist structure. We cannot reform it. Look at what it did in Greece. So let us instead look to movements of resistance, particularly in the peripheral region we are still part of and tied to. Indeed, let us remember the joy others in the region took when workers in Serbia brought a dagger to the heart of the butcher of the Balkans. That showed for a time what is possible. A Balkans free of nationalism, but also a Balkans free of imperialism.

Let us therefore celebrate again the capacity of ordinary people to change their conditions of life, which were clear in 2000, for all the manipulations and illusions that accompanied the changes, of which there were many. Let us use it to confront the pessimism rampant on the left, a left which is demoralised and still up against many challenges. We have fought before and we have won and we need to remember that. To use that old Gramsci quotation, which is overused, but hey: let us keep a healthy pessimism of the intellect, but also an optimism of the will. 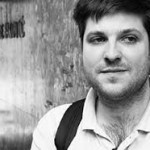 Vladimir Unkovski-Korica is a a member of Marks21 in Serbia. He is a historian and researcher who is currently a Lecturer at the University of Glasgow. His upcoming book entitled “The Economic Struggle for Power in Tito’s Yugoslavia: From World War II to Non-Alignment” will be released soon.