This publication has been made in cooperation with the Serbo-Croatian political web portal Bilten.Org. A version of this piece was also published on the author’s website, Amateuress. 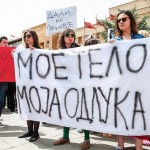 Activists protest the proposed laws on abortion in Macedonia. Banner reads: ‘My body my decision’

In recent years Macedonia has undergone a very subtle, yet dreadfully pervasive deterioration of the situation with womens’ rights. After an initial surge of promise with the introduction of gender quotas for political parties in 2006 and the adoption of the Law on Equal Opportunities for Women and Men, which, paired with the history of equal treatment from the previous system, led to even higher percentages in female representation in certain areas compared to the EU average, things started moving downwards steadily, without sufficient public resistance. In parallel with this decline, mainly unnoticed or overlooked, the government latched onto the popular, deeply misogynist metaphor of the suffering mother (often used to symbolize the country itself).

It can be claimed that the ploy began with the anti-abortion posters and newspaper ads which started littering the public space out of nowhere circa 2006-2007 without anyone claiming responsibility. The ads depicted graphic images of babies, fetuses in-utero and aborted fetuses making use of the age-long tactic of instilling and heightening the feeling of guilt in women faced with abortion. The condemnation and several guerilla actions organized by NGOs and informal groups aimed at neutralizing the negative influence of these actions did not manage to eradicate the propaganda which later progressed in different forms, such as the launch of the website Say No to Abortion or the Government’s campaign aimed at raising awareness about the harmful consequences of abortion. Little did we know or suspect at the time that these moves presaged the additional restrictions of the Law on Abortion adopted in the summer of 2013.

This went hand in hand with the start of a government campaign for an increase in the birth rate in 2008, which consisted of programs for increased financial support for a third and a fourth child in a family. This measure was planned to be offered solely in those regions with lower birth-rates that “by coincidence” turned out to be regions populated predominantly with ethnic Macedonians. As a result, it was overturned by the Constitutional Court and began to be rolled out in the rest of the country as well.

The TV advertisements from this campaign, which run to date, heavily reinforce traditional patriarchal male and female roles. One ad features a young unemployed couple in which the woman convinces the seemingly uninterested man to keep the baby because “it is going to be a boy, and he will have your eyes.” In others, older men – alpha-males – self-assuredly tell the story of their lives against background footage presenting them as wealthy gentlemen and authoritatively claiming that “family is the greatest treasure.” One of the most egregious ads, which goes so far as to congratulate a father in a hospital waiting room on the “murder of a healthy child”, received such a fierce reaction from civil society and the public that it was censored and at present is only aired in its full version at night.

The campaign was also boosted with the broadcasting of a TV show, “It’s Time for a Baby”, on the publicly-funded broadcasting service, often featuring lower-class, prematurely aged women and men, on the edge of social deprivation, who claim that having lots of kids is always a good idea and that they may not have jobs, but they are happy with their children. In reality many families resort to having three or four children simply in order to qualify for the financial assistance because they rarely have access to any other means of survival.

This anti-female discourse has traditionally found a great supporter in the Macedonian Orthodox Church. Thus, while giving a statement for national television on the occasion of the Easter holidays, Metropolitan Petar of the Bitola Diocese reiterated the stance that abortion is absolutely unacceptable to the Church, blamed women for the high rate of divorce, and also added that women are the ones to either save or destroy the country. He then proceeded to quote from one of Saint Paul’s more misogynist passages. The fierce public reaction by the feminist and women’s rights organizations prompted an explanation on the part of the Metropolitan in which he, naturally, further elaborated on the traditional role of the woman as a child-bearer and home-maker who must be subservient to the man, yet somehow, paradoxically, has even greater rights then he does.

In parallel with all of these transgressions of an earlier gender regime, all areas of public life began to consistently portray and explicitly encourage “traditional female obedience.” Female politicians from the ruling party plead “submissiveness” to the Prime Minister; rhetoric concerning prominent business women increasingly emphasized the idea that “family comes first” and offered advice on “how to balance a career and family”; the working conditions of the seamstresses,  who are the main breadwinners in some of the eastern parts of the country and yet work in substandard conditions for less than minimum wages and are constantly subject to molestation and harassment, has been systematically ignored; the media, which in the race for increased sales and hits, has resorted to even more blatant sexism and unashamed objectification and exploitation of the female body; and slut-shaming on social media and in the press (the most popular hashtags on twitter usually ridicule, or condemn “excessive” female sexuality or promiscuity – slut is one of the most frequent trending topics, while newspaper articles often muse over the “immorality” of the new generation of young girls who are reported to offer sexual services for a simple smart phone, or a dinner out a few drinks).

Even the Prime Minister himself felt the urge to address the issue in 2012 on IMRO Day, urging women to have more children in order to “save the nation”, qualifying the fight against low representation of women in business and politics as “…some sort of women’s rights… men’s rights…” Incidentally, this part of his speech is not translated in the English version of the address available on the official web-portal of the PM.

All of this fits very well with the traditional, patriarchal idea of the “role of a woman.” The campaign reached a climax in 2013 when the new restrictions to the law on abortion were published and then expressly adopted without sufficient public debate during the summer holidays in order to avoid a fiercer reaction from the public. The restrictions introduced a mandatory written request for abortion, consultative sessions about the possible advantages of proceeding with the pregnancy, and a waiting period of three working days before the actual intervention is performed. Among the consequences of the measures could be a delay in the procedure, possibly leading to the expiry of the legal deadline for abortion which is 10 gestational weeks, as well as the additional burden on the socially and economically most disadvantaged women, especially those not living in the few towns where the clinical centers offering termination of pregnancies are located. The law also stipulated that the woman’s partner had to be informed about the termination of the pregnancy – a provision which was severely opposed by the public and the civil sector in the country and consequently withdrawn. The NGOs and informal organizations dealing with women’s rights united in a single civil front called Matka – a platform for free access to safe abortion that organized events and published a newspaper and videos to raise awareness about the consequences of the law. Unfortunately, they were not able to stop it from being adopted. What’s worse, the bylaws dealing with urgent procedures and atypical cases have not yet been passed, thus putting a strain on the lives of women who are in need of urgent procedures due to intrauterine death or anomalous fetuses. The only bylaws that have been adopted are those concerning the counseling sessions stipulating that prior to an abortion, a woman is bound to listen to the fetus’s heartbeat and have a mandatory ultrasound screening.

The many transgressions against the fundamental human rights of women that have triggered gradual but ever-increasing articulations of anger, finally resulted in the establishment of the Gender Equality Platform in December 2014, uniting NGOs and informal feminist and leftist organizations. The Gender Equality Platform has already managed to thwart the attempt of the Health Insurance Fund to shift the responsibility for payment of maternity allowance to employers (money that the Fund planned to later compensate). This by no means marks an end to the struggle, and the prospects are definitely not very bright; however, the recent student protests and social unrest in Macedonia leave space for hope that, if they occur, the long-awaited changes would finally take into consideration the specific situation of women in society and on the labour market.

Ana Vasileva is a feminist activist from the independent initiative Fight Like a Woman. She is a full time interpreter and translator.