Window of opportunity. An interview with Yanis Varoufakis.

Note from the LeftEast editors: On October 1 the former finance minister of Greece Yanis Varofakis gave his keynote speech at the 6th Moscow Biennale. Ilya Budraitskis briefly interviewed him for their website. This is a reprint of the interview from the Moscow Biennale’s website.

Earlier you spoke about the window of opportunity to change the unfair rules of the game in the European Union that had opened for Greece in the beginning of this year. But by the end of the summer, after the Greek referendum, this “window” was closed. So, can you name some of the circumstances that “opened” and “closed” this opportunity? 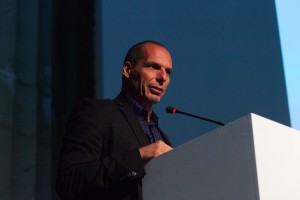 It was a crisis that pushed Greece into Great Depression, it put 1,5-2 mln (out of the population of 10 mln) people into poverty, it created generalised unemployment, loss of hope, migration and, at some point, the Greek people were so fed up that they opposed everything that television channels were telling them, newspapers, the political establishment of Europe and they said “ok, we will give support to a small party that said “no” to this self-perpetuating crisis and they gave us the mandate to go to Europe and say “We are not going to take this anymore, because it is not doing any good to either Greece, or to Europe.” So, they enabled us to do this against the pressures and the fears that were inspired by the establishment, the media, the propaganda and so on. That doesn’t last long if you don’t use that mandate to affect change and to stand your ground, then the people lose faith in politics altogether, which is what happened in the last elections at the end of September — 1,6 mln Greeks who had voted in the referendum in July didn’t bother to vote. So, that window closed, because we didn’t utilize it.

If you look, ever since mid-1990s Russia has been an extractive economy, an economy that is turning away from industry and towards extraction of materials from its soil — gas, oil, minerals and so on. Which became privately owned — oligarchy was based on that. Economic rents were extracted, taking advantage of the huge increase in commodity prices. There was a lot of wealth that was accumulated in Russia, but the rest of the world cannot tolerate these business practices and even Russia is finding it very hard to operate on those practices now with commodity prices collapsing. So, no, Russia is not offering an alternative model. The combination of oligarchy, of reliance on foreign friends, the diminishing of industry and the increasing use of authoritarianism is not stabilising the system which is becoming destabilised by the fall of commodity prices. So no, it’s not another model for the world.

Let’s come back to the idea of the window of opportunity. Do you think that there is some other place in Europe where this window can open?

One never knows. The one thing we know is that another window will open up somewhere. It is clear that this is the crisis of the Eurozone, which began in Greece, and then traveled to Ireland, to Spain, to Italy, to France and now went back to Greece in the last year. It’s going to turn up somewhere else. So it’s like a sick organism, seeking a body: a liver phase, then a stomach phase… and we need to find a cure. And the window of opportunity we are seeing, I hope, and I sense, is going to merge as Europeans get together across different member states and form a democratic force in order to manage more efficiently and democratically the common currency area.

How do you see your own role in this process?

I would try to be a catalyst for it.