We Are Not for Sale! (Communique from “Life is too Expensive” Movement)

On June 16th the Lithuanian parliament was supposed to vote for the so called New Social Model: a neo-liberal assault involving severe labor code liberalization, criminalization of single-motherhood (you will only receive child’s allowance if married), ‘income’ tax imposed on unemployment benefits, etc, etc. On June 15th a demonstration in opposition to the new legislation led to the occupation of a park in Kaunas. We have held the park for two nights now and so far we have been able to defend ourselves against the police with the help of a quite broad public support. Our protests and occupation against the labor code has been unfolding within a broader social movement called “Gyvenimas Per Brangus” (Life is to Expensive).

– Reject the introduction of “zero hours” contracts (article 66 in the new Labor Code). “Zero hour” contracts will practically cancel social security and guaranteed wages for the workers. The employer won’t be obliged to offer secure work hours to the employee or draw a timetable in advance. They promise us “more workplaces”, but they keep silent about the poverty that awaits those workers in the future.

– Reject the articles that diminish the security of the workplace (instituting, for instance, the ability to fire an employee with a 3-day warning, diminishing the severance pays), as well as those that limit the rights of trade unions, “non-material damages” to the employer, and prolong the retirement age. All these articles will only increase the power the employers enjoy, and will enable us to “flexibly” slave without any official limits.

– Reject the article that would prolong the working week and, instead, reduce it to 30 hours of work. It has already been more than a hundred years that the working day has not shrunk – we work 8 hours and more! A longer workday, already existent in practice, will now be made legal in the new Labour Code, prolonging the working week to 60 hours! As if we had nothing better to do with our lives but work.

– Ensure social security to all. If you want “flexible” work relations, first ensure people that they will keep their home, health insurance, education, food, public services and spaces, ensure welfare to all. When we will be sure that losing our jobs won’t lead us to awful poverty – then we can talk of “flexible work relations”.

– Cancel any limits to public gatherings! No more asking for permissions for peaceful protests, picket lines and marches from the institutions that are not interested in “permitting” us to protest! Any limits on the right of protest is a breach of our rights. Public spaces belong to us, the inhabitants! 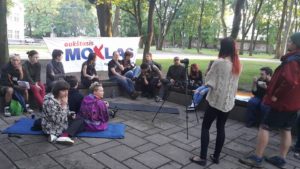 Scene from the Kaunas occupation (photo by Tadas Janusauskas)

Refuse to slave! Life is too expensive!”

a. May, 14th: National mobilization

The movement started in May with national supermarket boycotts against price-hikes and low wages. The first street manifestation of the movement was May 14th during a national day of mobilization. In Kaunas an assembly was formed after the demonstrations and was organized by a diverse spectrum of people: students, pensioners,  activists, service-workers, etc.—a clear departure from the close-knit activist circles of the past.

b. Rise of the Assembly

In the weeks following the M14 demonstration, the assemblies began to take form. We made the political choice of holding the assemblies in a park that the city is trying to turn into a sports center which could easily be set up for privatization. Locals around the park are fighting against these plans and their participation in the assembly was something which made a clear connection between our loss (and general lack) of social-securities and the right to public space.  Shortly before the J15 occupation event we also experimented with a neighborhood assembly in an area outside the city center.

On June14th a flashmob took place at the market parliament of Kaunas Akropolis: a mega shopping-mall in the center of the city that has imposed itself as a central public sphere.  The banner, which was dropped above Maxima Supermarket, reads  “our lives, not your profits” in reference to the 2014 Riga catastrophe where the roof of a Maxima collapsed, killing dozens.

d. Occupation of the park

The effort to occupy the park on June 15th has been a small but important victory for our movement. However fragile the occupation may be in these early days, the consistent presence in a public space thus far has given us the time to develop stronger connections internally and an opportunity for those not yet involved to easily participate. Food, drinks, assemblies, music, and tents are what make up the infrastructure so far.

How to be in solidarity?

We see our situation as part of a much broader context. Connecting our common struggles is obviously essential. As for concrete support, two activities could be of great help. First, donations, which could be used for food, legal support, and propaganda. The second could be posting to our Facebook page from where you are and stating your support for our demonstration and maybe saying something about the similar struggles in your context.