VIDEO: TalkReal in Vienna: Towards a Plan ‘D’ for Democracy in Europe

Note from the LeftEast editors: In this video of European Alternatives’ ‘TalkReal’ series the debate is on how to go beyond the pessimism that has taken over our contemporary political climate. TalkReal is published in co-operation with OpenDemocracy and Roarmag.

For years we have been told ‘There is No Alternative’, that the status quo is both healthy and here to stay. But as neoliberal institutions struggle to contain a complex and multi-headed crisis it is clearer than ever that radical change represents our only chance of a better future. 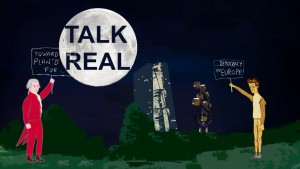 In this episode of TalkReal from the end of 2015 European Alternatives’ Lorenzo Marsilli debates with Walter Baier  (Coordinator of Transform), Katerina Anastasiou (Change4All), Kurto Wendt  (Convoy Refugee) and Alexandra Strickner (ATTAC Austria) about how to go beyond the pessimism that has taken over our contemporary political climate. At the core of this question remains the demand for real democracy – the same issue that fuelled many of the 2011 movements.

While these national initiatives were limited in scale and outcome, they did galvanise the imagination of civil society and, more importantly, demonstrated its capacity to organise outside of incumbent institutions. Today, as right-wing populisms leech on peoples’ fear, such experiments should not be seen as a failure but as blueprints for an alternative: a coordinated and international demand for democracy.

One Response to VIDEO: TalkReal in Vienna: Towards a Plan ‘D’ for Democracy in Europe