“The gentry could not abide familiarity in public. I remember years later working as a day-labourer on a nearby puszta, tying up vines, I suddenly jerked up my head in surprise when I heard a farm official who had been sent out to supervise us attacking one of the girls who was falling behind. “Do you imagine,” he roared, “that you can lounge about all day long because last night…” and here he used a word for intimacy which even the farm servants employ only to show their contempt.” 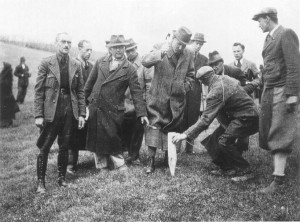 Why do we have to commemorate today, in 2015, the 70th anniversary of the defeat of Nazi Germany? Rather than asking why we ‘have’ to, the question is why we want to. The attitude of the main political currents in Hungary concerning the victory of the Red Army and its allies is straightforward. For the conservative Right and the far-right, which essentially view the question from the standpoint of the Axis powers and the erstwhile (Nazi-ally) Hungarian state, May 1945 is equal to a defeat and national tragedy; ’we’ lost the war. Meanwhile, according to the once dominant, but now increasingly marginal liberal canon, May 1945 has a dual meaning: as far as the Western Allies are concerned, it represents the victory of ’liberal democracy’, a cause for celebration, whereas in the case of the liberation of Eastern Europe by the Soviet Union, it merely represented the replacement of one totalitarianism with another.

If we refuse these views wholesale and refer to Eastern Europe’s 1945 as victory, as liberation, or even as a revolution why do we do that?

According to the above-mentioned two paradigms there could be only one sort of explanation: only traitors (this is the right-wing’s version) or archeo-stalinists (the liberal version) would talk like that, who should be clobbered to death, ignored or ridiculed. That is, to talk about 1945 as liberation is either the expression of particularistic self-interest (according to the Right, only Jews and communists were liberated), or of senility, an irrelevant nostalgia – an individual pathology that holds no argumentative content that is worthy of discussion. And indeed: are we capable of explaining to the apolitical-individualistic ’reason’ of Ich-AGs fighting their relentless everyday war in the jungle of capitalist society, why on earth one should talk about 1945, while precious time for career-building is ticking away, not to mention the range of more relaxing leisure options available? If we think we are not able to do so, then our views are indeed irrelevant.

To begin with: what happened was not simply liberation from Nazism. Besides liberation from Nazism (the most brutal form of capitalist class rule), it was a much longer-standing historical continuity in Eastern Europe that was effaced by the post-war democratic intermezzo and ensuing Stalinist modernization. The millennial ’old order’ – based on relations of pre-modern, personal subordination, social hierarchies of ’blood’ and ancestry – was swept away once and for all and put to rest by society following 1945, and not simply due to the pressure of Stalin’s Soviet Union. The dictatorial state socialist system that was created in the aftermath is not a model to follow for those of us in the tradition of democratic, self-governing socialism. Yet in light of the irrevocable dissolution of the old order we still speak of a social revolution, that is – no matter what we see and hear today around us in Hungary – impossible to reverse ever again. In this sense, we still hold onto the importance of 1945 today, in 2015, as much as ever: even if it at first sounds like an elusive abstraction to the average iPad-user to talk about victory and revolution about a long-bygone historical event, the essence of this turning point, that we are not born as ’lords’ or ’dirty peasants’ is something axiomatical to him/her as well, and something s/he would also hold onto.

But it is not only in this sense that we speak of victory and revolution. 1945 also heralded an expansion of societal democracy, that is, the attainment of symbolic equality of the ’subaltern’ classes and a dramatic expansion of their actual access to society’s resources, worldwide: from Western Europe (to a large extent thanks to communist resistance movements), through the expanded Soviet bloc (due to its own model of state-led egalitarian modernisation), to the former European colonies (due to anti-colonial movements). The former ruling classes either disappeared or were forced to make enormous compromises in the symbolic and political recognition of society’s ’lower’ strata and the latter’s access to societal resources. This shift was particularly dramatic in Eastern Europe, although it indisputably happened via the imposition of a political dictatorship.

While we believe the reinstatement of the old feudal or feudo-capitalist order in Eastern Europe – in a symbolic and material sense – is ultimately impossible, what is there to say if we consider the question of societal democracy? Yes, we hold onto 1945, not simply in the sense of the victory of the Red Army over the Nazis, but also as a moment of partial victory for societal democracy, which occurred on a global scale. Today, however, we no longer live in the epoch opened by 1945, as another world historical turning point stands between us and 1945: 1989. If we do speak of 1945 as victory and revolution what can we say about the last 25 years of Eastern Europe and Hungary? Can we say anything else in hindsight but that 1989 was a defeat for societal democracy? Haven’t we experienced a textbook example of how liberalism (which is based on the tyranny of the owners of capital in the economic sphere) replacing plebeian, egalitarian democratisation opens the way to dictatorships of various kinds? Thus, it seems we must use an even starker term concerning 1989, if we consider 1945 as a revolution. Has the time come today, in 2015, to draw a lesson and to say it out loud: 1989 was a counter-revolution, the first step of the total destruction of societal democracy, that led to all further steps with an inexorable coupling?

If this is the case – and the social reality of today’s Hungary and Eastern Europe leaves little space for an alternative conclusion – then we must pose a question even more difficult and agonising: do we have the capacity, the courage to even imagine another, yet-to-come revolution of Eastern Europe (or even tout court of Europe), an explosion of societal democracy similar to that following 1945?

Try to do that and start from there.