Note from the LeftEast editors: we publish this statement by Rojava Solidarity NYC, a solidarity committee dedicated to supporting the revolution in Rojava, written in response to the recent Turkish operation in Syria, Euphrates Shield.  RS-NYC seeks to publicize Rojava’s ongoing struggle in the English-speaking world, to promote the revolution’s radical communalist politics, and to provide direct, humanitarian aid to the people of Rojava.  Past aid campaigns have included the provision of vital medical supplies and the collection of books for the Mesopotamian Academy. The committee has also published one of the first English language books on the Rojava Revolution entitled, “A Small Key Can Open A Large Door.”  Ongoing projects, contact information, resources and recent articles and interviews can be found on: supportrojava.org.

When the strategic Syrian town of Manbij was liberated from ISIS in August Western media described an atmosphere of jubilance and relief.  More than 250 fighters from the predominantly Kurdish People’s Protection Units (YPG/YPJ) and their multi-ethnic partners in the Syrian Democratic Forces gave their lives in this American-backed operation. Their sacrifice was offset by the hopeful images that streamed around the globe: women celebrating by tearing off their veils, men laughing while clipping their beards, and militia members and villagers enjoying their first public cigarettes together since the start of ISIS’ occupation. But their joyful reprieve may be short-lived.  In a cruel irony, no sooner had Manbij been freed with the encouragement of American planners, than these same planners demanded that their YPG/YPJ allies abandon the town to another, more politically influential jihadist force, this time in the form of Turkey’s Islamist proxies affiliated with the Free Syrian Army (FSA).  These FSA units are currently occupying towns along the Turkish border and are continuing skirmishes to the south, ostensibly battling ISIS, but in truth acting at the behest of a Turkish government intent on strangling the Kurdish based Democratic Union Party (PYD), the YPG/YPJ, and the revolution they have initiated in the north of Syria, an area known to the Kurds as Rojava. America, holding its breath for the imminent clash, continues to weigh the worth of one piece against the other and to ponder its decision. 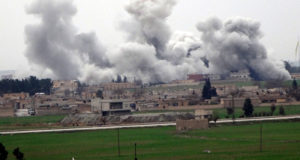 When questioned about Turkey’s ongoing cross-border operation, including the bombing and shelling of allied YPG/YPJ positions, Secretary of State John Kerry offered a rather enigmatic remark: “There has been some limited engagement, as everybody knows, with a component of Kurdish fighters on a limited basis…” The statement sounds simple, diplomatic, and measured, and yet contained in the emphasis on the word “limited” there is the intimation of a long-term policy decision of tremendous consequence.  Perversely, the U.S. may be willing to allow the PYD and its People’s Protection Units, the very same “brave combatants fighting ISIS and barbarism,” which the world so admired since the battle of Kobane, to be attacked by a Turkish state, which even Vice President Joe Biden has in the past admitted is a tacit supporter of jihadists factions in Syria, including ISIS.  Deputy Secretary of State Anthony Blinken deepened this impression when he elaborated that the U.S. is “against a connection between Kurdish self-declared cantons.”  American policy makers seem to suggest that they would like to have it both ways, denying backing for the political project in Rojava (the success of which is far more vital to Rojava’s long-term survival than arms or advisors) while advocating for continuing military cooperation.  A signal is sent – after you are of use, you may well be discarded and left to your fate.  For the United States to abandon the Kurds in this fashion would be morally repugnant, the equivalent of stabbing America’s most consistent Syrian ally in the back, but more importantly it would be a grave strategic miscalculation with far reaching ramifications.

In the messy, multi-polar context of the Syrian Civil War it is tempting to simplify the conflict by viewing it only through the narrowest of lenses: Assad and ISIS, nation states and their proxy wars.  It is important to remember that the context is, in fact, much broader, with a great deal more at stake.  The PYD represents not only a convenient bulwark against a brutal jihadist enemy, but a rare, positive vision embodied by the ongoing revolution in Rojava.  Remarkably for the region, theirs is a revolution that resists authoritarianism and theocracy, and places at its forefront ethnic pluralism, secularism, direct democracy, ecology, and feminism.  If the international community allows Turkey to destroy this ascendant movement, as it would like to, both a Middle East in dire need of new perspectives and a post-conflict Syria will be so much the poorer for it.  The world has the opportunity now to focus not only on defeating a common enemy who would like to see us dragged into the past, but also on supporting those who could possibly guide us into a more just future.

The ethos of the PYD reveals an extremely unlikely and therefore precious political evolution – one that has rarely taken place throughout history and has given hope to an international left that has struggled to find new forms.  Its origins can be traced back to the decades-long guerrilla struggles of the Cold War, its ideology linked to the Turkish Kurdistan Workers’ Party (PKK) and their leader Abdullah Öcalan.  At first, this was an ideology of ethnicity-based national liberation that aligned itself with the socialist block.  A viewpoint that risked being both narrow and dogmatic.  However, after the collapse of the Soviet Union, and with the advance of globalization and neo-liberalism into the new century, leaders of the Kurdish movement re-appraised their positions and were, amazingly, able to create a new synthesis stretching far beyond their original aims.  Rather than ossifying, they revitalized their political project, remaining communalists, but scrapping the authoritarian impulses in old 20th-century models and placing in their stead horizontal, local forms of self-management inspired by sources as diverse as ancient Greek democracy, libertarian socialism, Murray Bookchin’s theories on anarchist organization, and their own unique approach to feminism.  The purest expression of this new paradigm can be found in liberated cities like Kobane, where local councils and communes are actively cooperating in the reconstruction of a city nearly demolished by ISIS.  Through these, citizen’s organizations direct representation for all social spheres is ensured.  Councils exist to address the specific concerns of groups ranging from women, to youth, to professional organizations like bakers, etc.  This development marks not only a turn towards democracy, but a turn towards a radical form of autonomous democracy – animated by the belief that each and every individual has a right to participate in the political questions that affect their lives.

It is plainly visible that this is not just a cosmetic change in rhetoric.  Such practices are so deeply ingrained that even the YPG and YPJ carry these democratic principles into their military units, including the election of officers and the representation of women in command positions.  In defiance of long held patriarchal views, women in fact have a mandated place in Rojava’s leadership (including required seats in councils and mandatory presidencies for women in civil organizations). In the field of ecology, the PYD are committed to an economy that does not encourage irreparable harm to the environment, and recognize that societies must contend with the awesome duty of protecting our planet at the systemic level.  Even the once absolute demand for an independent nation state has crumbled under their non-hierarchical analysis.  The PYD has stated time and time again that they do not wish to create a nation state, that they do not believe nation states serve the purpose of progressive social movements, and that all ethnicities and national groups are welcome to participate in their revolutionary process. The PYD and its international sister organizations call this amalgamation of political and philosophical thought “Democratic Confederalism.”  In Rojava we can see the potential that this kind of autonomous democracy has for contemporary, 21st century resistance to both a rapacious capitalist modernity and to its authoritarian correctives, be they fascism, theocracy or totalitarian communism.

It is a sad reality that for this same reason the PYD has no true friends in the international community.  Their innovative critique is seen as dangerous and destabilizing to existing regimes when colored by the short-term, realpolitik logic that guides the policy makers waging war in Syria from foreign capitals.  Cynically, at the present moment the U.S., the single actor most likely to sway international opinion and to check Turkey’s aggressive policies, sees more value in Turkey’s military cooperation than it does in new approaches to politics which may offer a way out in a conflict torn region.

But why does Turkey harbor such a deep fear of Democratic Confederalism and the PYD?  Precisely because they recognize that this democratic vision of the future is at risk of spreading and consolidating.  In Bakur (southeastern Turkey), Democratic Confederalism has been developing as both a political concept and practical form of organization pre-dating Rojava.  After decades of repression of the Kurdish people, the banning of the Kurdish language and media, and even the propagation of the idea that Kurds do not exist (derisively calling them “Mountain Turks”), Turkey recognizes that the successful example of radical, autonomous democracy across the border is an incendiary inspiration to the Kurds of Bakur, who share the same political project.  If, as its adherents believe, Democratic Confederalism can appeal across ethnic and regional boundaries, then Rojava’s example becomes a threat not only in the restive southeast of Turkey, but an existential threat to Turkey’s current administration and its misogynistic, nationalist, Islamist agenda.

Turkey’s President Erdoğan has shown that he is willing to resort to dramatically authoritarian measures to suppress dissent.  At this very moment tens of thousands are filling the jails in accordance with his indiscriminate response to the attempted coup, with prisoners ranging from widely respected journalists to apolitical academics.  11,000 teachers have been suspended from their positions for supposed ties to Kurdish movements.  More words of awe than of criticism can be found in the international press.  Clearly, Erdoğan understands how to wield brute force against his enemies.  Turkey cannot, however, so easily suppress the spread of ideas from Kurdistan that defy ethnic and national borders and that have grown to supersede sectarian agendas.  His administration recognizes that if the PYD is allowed to showcase their political reality, the Kurds within Turkey’s own borders may break out of its calculated misrepresentation of their aims (Turkey, for instance, still insists all Kurdish interests represent a form of violent separatism) and reach ever increasing numbers of people across the whole of Turkey.  Myopic views like this produce dangerous unintended consequences. Erdoğan’s, if left unchallenged, may well sink Mesopotamia into even further despair and chaos.

In 2014, as the fighting raged in Kobane, CNN chose the female fighters of the YPJ as the “most inspiring women” of the year.  On September 2nd, 2016, Turkish forces firing across the border at these very same women killed two demonstrators, protesting peacefully against the construction of a massive border wall and the enforced blockade of the very same city.  One of the dead was 17-years-old. No major American news source carried the story.  This is the urgent situation in which we find ourselves.  Can the world move beyond an ugly history of sacrificing just causes on the altar of expediency?  In answer to this question, Rojava demands our solidarity – not out of altruism, but out of a belief in the possibility of an emancipated future.