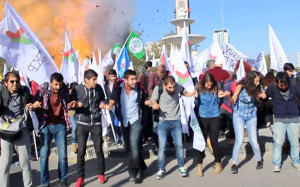 At 9:30 yesterday morning Turkish citizens opposed to their government’s war policies gathered at the Ankara Train Station for a demonstration organized by a broad alliance of organizations: the country’s two main oppositional labor unions (DISK and KESK), the national Chamber of Architects and Engineers (TMMOB), the Medical Association (Tabipler Birliği) and the June Movement (Haziran Hareketi) formed in 2013 to give lasting organizational form to the Gezi Park protests, to name a few. Shortly before ten o’clock the group began its march toward Sıhiyye Square where from 12:00-16:00 they were to hold a rally titled “Stand Up to War, Demand Peace Now!” (Savaşa İnat, Barış Hemen Şimdi).

There is no question whom such a rally benefits: Turkish society, but especially the citizens of the war-torn southeast, whether Kurdish, Arab, or Turkmen; the families of soldiers in Turkey’s conscript army, whether or not they agree with the state’s war aims; the working class of Turkey, which needs to unite against those who would splinter it along identitarian lines. There can be no question whom it challenges: those holding onto power in the saddle of sectarian strife, manipulating ethnic and religious hatreds to cover up their on-going massacre of workers, women, and minorities. There can be little doubt that these words apply as well to the AKP as to the fundamentalist gangs it has been accused of harboring and arming for battle in Syria.

We should not spend too much time agonizing over which arm of the reactionary alliance is formally responsible for the twin explosions that ripped through the crowd at 10:04 AM, as the convoy had reached Gençlik (Youth) Park across from the station. Whether the culprits are an international jihadi group or someone closer to home makes little difference when these groups have effectively formed a united front against the Kurds, and against progressive possibilities generally from Istanbul to Damascus.

The state’s first reaction to the explosions was to punish the victims. Police cordoned off the area, blocking ambulances and shooting tear-gas at those trying to help the wounded. Eighty-six demonstrators are now dead, according to the Minister of Health; ninety-seven, according to the Medical Association. Dr. Hande Arpat wrote that the police response prevented her and other doctors from reaching the wounded in time. Eyewitnesses have said that some of the disputed number died, not of the explosion, but of tear-gas.

If the first order of business was to ensure as many deaths as possible, censorship soon followed. The television regulatory board (RTÜK) temporarily outlawed coverage of the event, and access to Twitter and Facebook were blocked.

Exposed to the criticism of oppositional politicians, government spokesmen soon resorted to one of the classics of Turkish polemic: blaming the victims. Forestry and Fisheries Minister Veysel Eroğlu breezily reminded his audience, “You know, before the elections, so that they would pass the [10%] barrier [for entry to Parliament], just to make themselves look like victims, such acts of provocation were done.” Peoples’ Democratic Party (HDP) co-chairman Selahattin Demirtaş duly noted, “there are AKP administrators who openly claim that we bombed ourselves.”

Those versed in Turkish politics will immediately recognize the trope of the agent provocateur. Kurdish leaders have not been its only target. The Alevi and leftist intellectuals massacred at the Madımak Hotel in Sivas in 1994 could tell a tale of such revisionist history, as could the staff of the old-line secularist newspaper Cumhuriyet (“Republic”), whose prominent columnist İlhan Selçuk, then eighty-three years old, was arrested in 2008 on suspicion of planning on attack on his own paper for the sake of instigating a military coup. In general the Balyoz and Ergenekon conspiracy trials concluded in 2013 (and voided soon afterward when the AKP and its Gülenist allies in the police and judiciary turned against each other) deepened Turks’ appreciation of the plausibility of self-inflicted wounds.

But this genre of accusation has really come into its prime in the long series of attacks on HDP gatherings, headquarters and sympathizers over the course of this year, after which the AKP unfailingly waxes high-minded about “terrorism,” by which its target audience is expected to hear “Kurds.”

So it was yesterday evening in Prime Minister Ahmet Davutoğlu’s speech to the press, in which every fifth word or so was “terror” or “terrorism,” climaxing in a threat aimed at Demirtaş. “If he turns the pain of our citizens who lost their lives to terror today into a call for civil war, if he says, ‘this is a crime of the state against the people’ and invites the people to revolt against the state, then this stance…will be investigated, prosecuted, and sentenced.” Davutoğlu promised that, “if anyone should demand vengeance I am here, I am in Diyarbakır, in Konya, I am everywhere in Turkey.” It is not hard to guess from whom vengeance will be taken.

Ethicists can debate the place in justice of vengeance, but Justice and Development Party (AKP) justice is a special case, in which vengeance is exacted from the victims. That is why Ahmet Şahbaz, the policeman who killed demonstrator Ethem Sarısülük on the streets of Ankara during the Gezi protests, has recently been released, though initially convicted of murder, while Sarısülük’s family members have faced criminal charges of insulting Şahbaz during the trial, and visits from armed men in their neighborhood. It is why a young woman convicted of killing her serial rapist was sentenced to life in prison while countless femicidal men get short terms for demonstrating “good conduct” during the procedings.

Where criminals are protected and their accusers criminalized, all but the fearless tread with caution. Republican People’s Party (CHP) chairman Kemal Kılıçdaroğlu refrained from making “personal accusations” but asked nonetheless whether “this is how Turkey should be governed.” His lieutenant, CHP parliamentarian Umut Oran, was more blunt, demanding the resignation of the head of the intelligence service (MIT) and the Interior Minister, for failing to prevent mass murder within sight of the train station, the main football stadium, the main amusement park, and the museums and other main cultural institutions of the capital city. In the absence of such a resignation, Oran maintained, the interim government tasked with shepherding new elections on November 1 would reveal its true aim to be simply to keep the AKP in power. At a press conference later in the day, the question of whether his fellow ministers should resign made Justice Minister Kenan İpek laugh.

With much yet unsaid, it was left to Selahattin Demirtaş to connect the dots. “If their fingerprints are not [on this crime], will even one of the leaders, who failed to prevent it, resign? Not one. That means that they’re pleased. They’re very pleased with the picture that has emerged. This is not an attack on the unity of our state and our people, this is an attack on our people by our state.”

Doubtless the government will think little about things having been laid so far out in the open. Turkey’s “neighbors” in the Syriza Party may declare that “the Erdoğan government (sic?) must answer for its attacks against democracy and peace in Turkey and the surrounding region,” but pro-government figures like the organized crime boss Sedat Peker will go on making statements like “when our self-defense is at stake, we will let their blood flow by the ditch-full,” delivered to applause at a rally in Erdoğan’s ancestral home of Rize the day before the attack. They’re just words, after all. Just as pro-government journalist Cem Küçük could write to rival Ahmet Hakan, in print, “we will crush you like an insect,” and then act surprised when three thugs with AKP party membership assaulted Hakan in the street.

Yet if the government now no longer feels the need to hide its intentions, then neither does its opposition. Last night thousands gathered in Taksim demanding that the government resign. Some people are truly fearless.

One Response to Turkey’s Tiananmen in Context