Together – another politics is possible: The Razem Party in Poland and hope for the new

It was not long ago that Poland’s name echoed throughout the whole civilized world, that its fate stirred every soul and provoked excitement in every heart. Lately one no longer hears very much about Poland – since Poland is a capitalist country. Do we now want to know what became of the old rebel, where historic destiny steered it?

The state of things

In August 1980, Polish society united to change the political system of the country and make democratic socialism possible. The Solidarnosc (Solidarity) independent workers union managed to gather 10-million members by March 1981 and introduced a new way of governing the country – by democratic, grassroots laboring masses, in cooperation with the existing government. This was an experience and a practice, which gave way to the end of state communism.

In Poland this experience has been largely forgotten due to the rapid and brutal introduction of neoliberal capitalism after 1989. As David Ost rightly pointed out, the workers union betrayed its founding members, making the working class pay for the installation of the new elite.

Today, Poland abounds in Special Economic Zones, which allow large profit oriented corporations not only to employ workers without respecting the usual rules of the labor code, but also provides them with state funded subsidies and tax relief. Poland is also the largest exporter of workers in the EU, with approximately 3-million migrants looking for jobs in the UK, Ireland, Germany, and other Western countries.

Depicted as a GDP ‘tiger economy’ or as a “green Ireland,” Poland’s minimal wage is set at €300/month, median salary at €500/month, and official unemployment sits at 10%. Women do not have the right to abortions, the state pays for religious lessons in schools, and the church is the biggest landowner in several of the country’s biggest cities.

The upcoming parliamentary elections – this Sunday, will almost certainly bring back Kaczynski’s party (PiS – Law and Justice) to power. We will once again witness efforts to perform a truly Schmittian enforcement of the executive powers at the expense of the legislature, we will all be engaged in defending minorities, gay people, refugees, the poorest, women, feminists, and others against a hardline backlash. We have all been there before and we all know how exhausting it is to fight to preserve one’s dignity in poverty and to defend ourselves from racist, sexist, homophobic and xenophobic prejudices, especially if they become the state’s official doctrine.

The officially recognized opposition to the PiS hardliners are two: the currently ruling PO (Citizen’s platform) of Ewa Kopacz and Donald Tusk – the neoliberal party, which governed for the last two terms and clearly has exhausted the citizens’ trust, and the ZL (United Left), gathering the post-communist socialdemocrats, responsible for neoliberal changes in the labor code, wars in Iraq and Afghanistan and CIA prisons in Klewki, Poland. Other parties include, the Greens – not represented among the ruling powers until now; and the liberal party of Janusz Palikot, which has a neoliberal program, but brings important left wing politicians, such as Barbara Nowacka, Wanda Nowicka or Robert Biedron, into politics.

Politics for the Left

Interestingly, the only real alternative both the neoliberals and the slightly less conservative neoliberals, is the newly formed Razem Party. Born in May 2015, only some months ago, out of a decision coming from the socialist social movements, the feminists, the city and local activists, progressive ecologists and other people without prior careers in institutional politics or even openly opposed to it (such as the author of these lines), Razem gathers around itself a social-democratic program in favor of progressive taxes, open access to health care, restructuring inequalities between regions, installing social housing and reforming education, universities and culture. It is a party that openly speaks about equality in marriage, regardless of sexual orientation and gender; a party, that wants the refugees to be welcomed, a party, which while supporting Ukraine’s right to autonomy, also criticizes the neoliberal line. It is an anti-imperialist social-democracy. One that we have not had since before 1914.

Razem wants to tax the big corporations and augment the taxes of the richest 10% of the Polish population earning more than 5150 pln (a bit less than €1300/month), which is a solution that no living liberals have done. We want to strengthen state control over labor abuses and allow every citizen to have access to medical services. 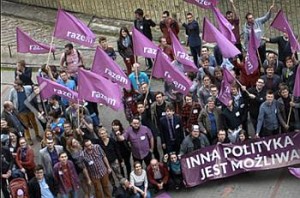 Razem – another politics is possible

In the global efforts to build a new and better world, in a world currently built solely for profit, a party like Razem is condemned to be minoritarian, it is bond to be in the opposition. The current polls give us between 0,9 and 3,5%. It is not much. However, sometimes things suddenly work out. Like in the case of so many minoritarian parties of the Left, that entered politics in the last two centuries.

Razem does not have an officially appointed “leader,” instead it has 30 people in the party’s council and board. 49% of the candidates in the coming election are women, which make us the only party actually practicing equality and not just talking about it. We have counted our reforms, and they do make sense financially, we also speak about the labor system as we know it – since none of us really is a corporate boss, we do have a lot of hands on experience with instable labor conditions, precarisation, being mobbed and abused, exploitation and the lack of state control over employers.

We clearly resist in very un-heroic ways, which makes us a part of the 90% of those below the income that would make a sustainable living in Poland possible today. We come from the ‘intelligentsia,’ the working class, both small and big cities. Some of us are single moms, some have families, some are queer and some are not. Most of the members of Razem are between 25 and 40 years old. We are the ‘no future’ generation – no jobs, no retirement, and no rights. With the public media refusing to give us the time granted to us by law, we might not pass the 5% threshold required to enter the Parliament. But we will not surrender. As Rosa Luxemburg often noted, disappointment is the luxury that only the really privileged can afford.

Time has come to change this, to resist neoliberal globalization both at home and globally.

Another politics is possible. 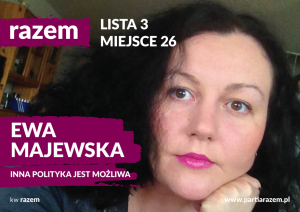 Ewa Majewska is a feminist philosopher and activist, postdoctoral fellow at the ICI Berlin, working on semi-peripheral publics, solidarity, and resistance. As a precarious intellectual and cultural laborer, she became tired of neoliberalism, and is now a candidate in the Parliamentary elections, from the Razem Party, Warsaw list. She has published books and articles in Signs. Journal for Women and Culture, e-flux, and the Polish edition of Le Monde Diplomatique among others.