Things NOT Happening With Respect to the Refugee Crisis in Europe 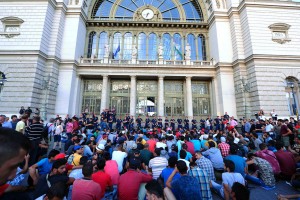 Here are the conversations that are NOT happening:

The European Union is not giving any clear signals just what it actually wants the Schengen states most exposed to the refugee inflows–not only Hungary, but also Greece, Bulgaria and Italy–to do. It is completely obvious that, if anybody actually cares about alleviating the crisis, they would have had to have much more of a hands-on approach to this. By NOT doing this, the EU is cynically opening space for local strong men to build their political capital through anti-immigrant propaganda.

Nobody asks what the political calculus in Brussels, Berlin and Paris is about the first-entry states and their neighbors, especially Hungary, Slovakia and Austria. Seriously nobody understands there how the EU’s and the strongest EU-member states’ policies are pushing Hungarian, Austrian and Slovakian politics toward the right? Is that what they really want, an openly xenophobic, (semi-)fascist central Europe?

Nobody is taking the western media to task on the breathtakingly simplistic, borderline-cultural-racist representation of the crisis. There is almost no reporting that makes an effort to distinguish the society of, say, Hungary, from the government. Nobody tries to disentangle what about the Hungarian government’s behavior is /1/ willful neglect, /2/ inexperience, /3/ open racism, /4/ more-or-less accurate execution of EU law (which, supposedly, is superior to national law in issues of immigration in the Schengen area). Nobody wishes to see Hungary, or any of the first-entry states as complex societies, with enormous problems of their own, with their own histories and their own “demons.” All that is basically wrapped into a breathtakingly formalistic “west=good, east=no good” representation. In the context of Hungary’s EU-application and accession I called this “the rule of European difference.” Again it’s going on with full force. Part of the story is that the xenophobic PM is way over-featured to the expense of other, better educated people who could speak for “Hungary” in more nuanced ways. This is true not only of the US media (where this is a well known generic problem) but also for west European reporting as well.

Nobody questions the ridiculous allocation of support by Brussels to the states handling the flows: E.g., Austria, with a per capita GDP several times greater than Hungary and virtually no stationary asylum requests has recently received more refugee-influx-related funds than Hungary. This belies every claim to rationality on part of the EU center in Brussels.

Nobody is even beginning to address the structural origins of the crisis. (See my previous post on that.)

Nobody is acknowledging the astonishing, selfless, heroic help volunteers have provided the refugees, from high school and university students to retirees, from nurses and doctors to social workers, etc. They are the people who bought, often from their own pocket money, the water, food and basic provisions. The government (represented exclusively by the police) stands idly by. The western media: blind to this heroism.

Nobody is asking the question: What if what we see now is not a short term problem, a passing wave, but a new normal? What if this is a new form of “Third World” global geopolitical action?

Nobody is asking the question: What does it mean that many of the #refugees, esp. those coming from Syria, are so highly qualified? Clearly, parts of the local intellectual elites are fleeing. Is this basically a brain drain a la Hungary 1956-57? What will this mean for the future of west Asia, and Europe-west-Asia relations?

Why is nobody turning to Canada and the United States for active participation in solving the crisis? They do have extremely large-scale and active immigration policies, large and very developed state apparatuses to handle refugee flows, and a long history of doing so.