Swiftly after March 28th, when a legislative proposal backed by the FIDESZ government endangered the existence of Central European University in Hungary, events  followed at an unprecedented pace. The whirlwind of bellicose statements, powerful street-protests, counter-statements, and legislative show-down have highlighted some of the political strategies and structural constraints molding the decisions of the Viktor Orbán government. We publish here an article by GM Tamás which originally appeared at the beginning of the conflict in Hungarian, in the magazine HVG. Ironically referencing the numerous “affairs” that historically have shaken European politics, the piece highlights some of the dynamics contained by this ongoing conflict and its importance for understanding the Hungarian context. In the meantime some of the article’s expectations have not been met: within a complex international context, overshadowed by the Washington-Moscow conflict and Budapest’s diplomatic flirt with both, the US State Department did not support FIDESZ’s legislation, while different EU bodies expressed their concern. Some of the government’s bets were widely misplaced and this seems to have had an effect on Viktor Orbán’s cabinet. Nevertheless on April 10th despite tens of thousands marching on the streets of Hungary and a wide international outcry, the discriminatory legislative proposal was officially signed into law by President Janos Ader. The protests continued throughout the period, while on April 12th a large demo was organized against the anti-CEU and anti-NGO crackdown planned by the government. Another large demonstration is about to take place on Saturday, April 15th when thousands of protestors are expected to take to the streets again.

Demonstration on the 9th of April in front of the Hungarian Parliament.

There’s a lot of truth in what Robert Braun writes: there is a lot of injustice in the relationship between Western and Eastern European countries. It’s undeniable that the pursuit of the western model of Capitalism, ‘joining Europe,’ or the cascading privatizations have been a failure. It’s also true that the Eastern European authoritarian and ethnicist systems are comprehensible as they point back uncomfortably to all that was wrong with the concepts of 1989. These are all elements of the global crisis.

The destruction of the political, and not simply the economic global system (of which Brexit and the American president’s openly expressed repulsion towards ‘Europe’ are the biggest signs, pulling apart the status quo in existence since 1945, ) has irredeemably weakened the position of liberal capitalism in Europe. The European right wants to, and often can, make maximum use of this. The continuation of the European Union itself hangs on the banal question of who will be the next president of the French Republic:  and this is a real chance for the ‘moderate fascist’ nominee. The French presidential elections are the final call, however contingently their result will come about- ‘Europe’ is so weak that such trivialities as the scandals occurring one after another, or a luckless TV announcement can have a powerful effect.  The ongoing disturbances on the Eastern border with Russia and in the Balkans could also disrupt what remains of Europe’s balance. 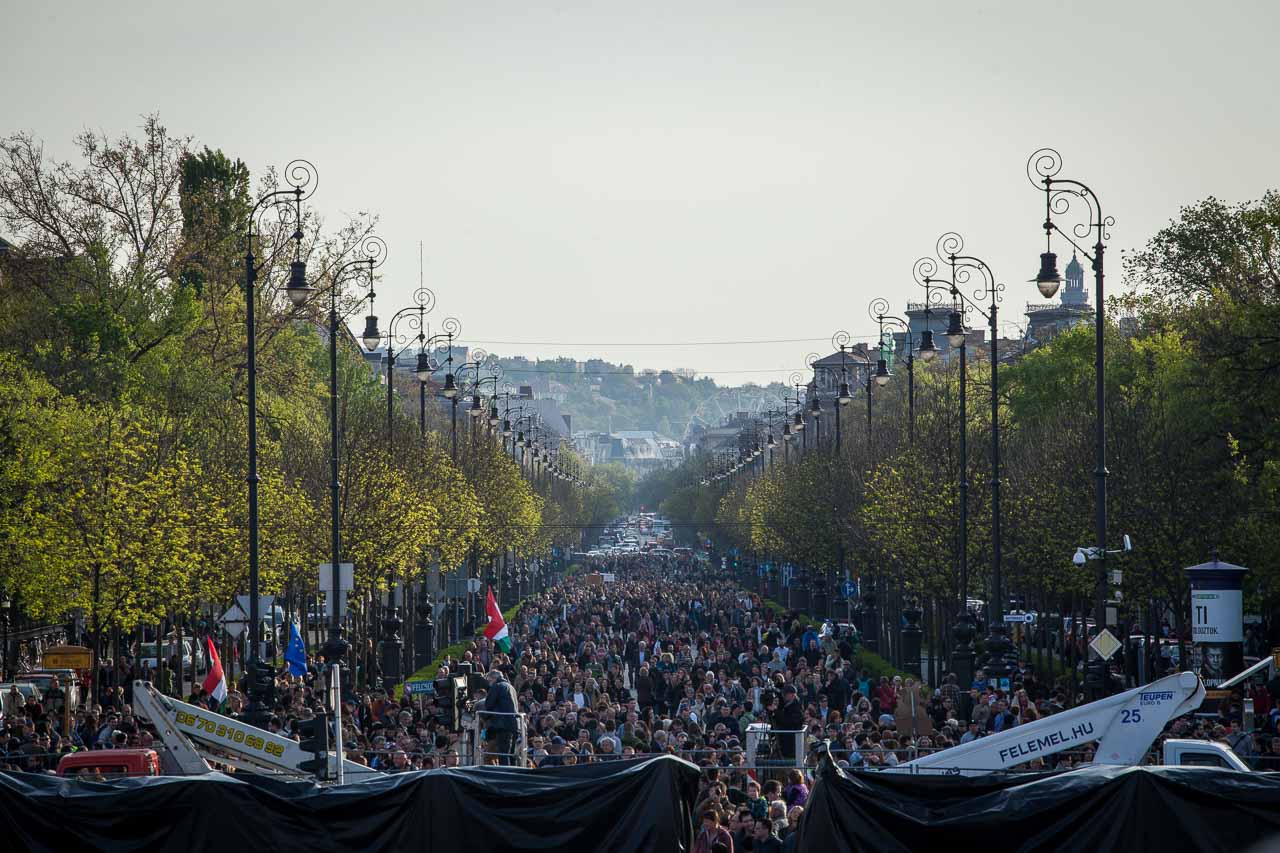 Still, what we have to see is that it is not possible to simply sum up the increasing problems of Hungary’s non-governmental (‘civil’) organizations and of the Central European University ‘historically’- as if the bankruptcy of the 1989 regime change could warrant everything that the gravediggers of liberal constitutional systems are presently choosing to do.

Prime Minister Orbán’s system, about which former Fidesz member and now conservative economist Lászlo Urbán paints an interesting picture, is constructing a bloodless dictatorship by pursuing two strategies. First, the government and the leadership, understood in a constitutional sense, is being handed over to informal groups (which means channeling significant economic resources in their direction). Second, it endlessly centralizes, while the actors of the ‘center’ have  been completely freed by now from public or formal monitoring. The entire system of constitutional checks and balances can be considered to have disappeared; ‘parliamentary procedure’ are a pathetic, shabby stage-set; the county level leadership too has been eliminated, customary bureaucratic processes are in ruins, and state institutions beaten to shreds. The state is in a chaotic condition (a situation brought about on purpose), and the system of passing laws an untraversable pile of garbage, giving a free hand to Mr. Prime Minister and his informal gang of leaders. All this is what the intellectually exhausted ‘opposition’ identifies as corruption and thievery, which is quite an rudimentary analysis. While of course public funds have long lost their public character, all this serves for much more than buying a yacht. It serves political goals: it is useful for centralizing an uncodified concentration of power with no visible limits.

In the recent period, Mr. Orbán and his circle have worked to shut down every independent entity, regardless of its kind.  After the neutralization and corruption of the media followed the liquidation and impoverishment of cultural institutions, and their reorganization in response to the Jobbik lobby; the destruction of the objective systems of applications and funding, and the onslaught on non-governmental (‘civil’) organizations. The autonomy of institutions of higher education is next. 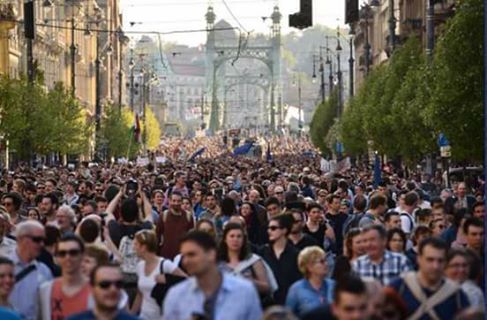 These last two also have an ideological function: in Orbán’s (far right) propaganda, NGOs and the Central European University, through the symbolic name ‘Soros,’ embody ‘the stranger’. The official far right propaganda does not state that the division of powers, constitutional control, a plural public, accountability, and the right of law are wrong: but rather that, in some vague way, they are not Hungarian. They do not say out loud (or it happens rarely) that the freedom of scientific research, education, philosophy, literature, art, and political judgement are harmful: but rather simply that they are abused by gender ideologists, feminists, gay lovers, and migrant huggers of the cosmopolitan Jewish-liberal opposition, who, ethnically and sexually, desire to weaken the backbone of the nation. The opposition is simultaneously perverse and abstract: its symbolic icon, as always, for the last 200 years, the ‘international Jew’ (who of course does not necessarily need to be of Jewish descent, although it doesn’t hurt if they are).

Mr. Orbán’s strategy is frightfully simple. If someone were to say to him: ‘Mr. Prime Minister, your idea is mistaken’, he would answer: ‘you are not Hungarian’. The so called opposition is falling victim to this logic when they cry ‘ thief, thief’ day and night, which does not count as an argument. 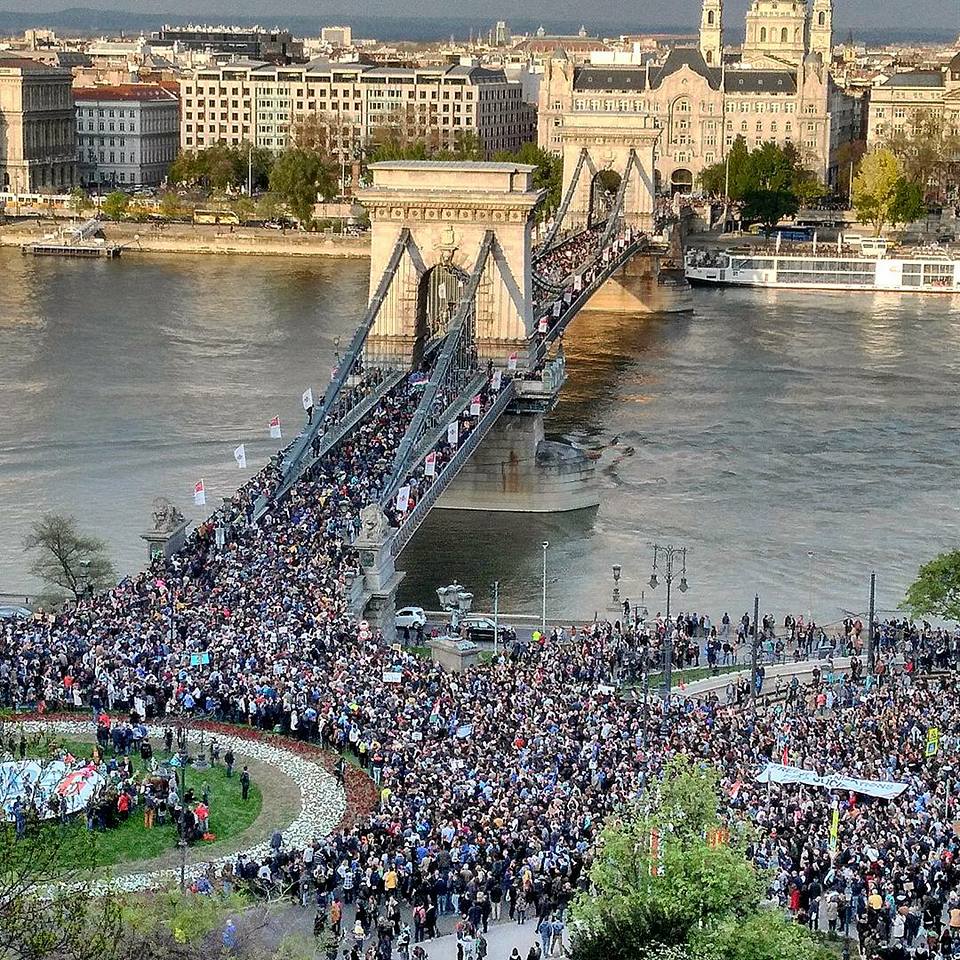 The 9th of April March in Budapest.

The CEU is an incredibly important Hungarian and East Central European institution-and the conservative academic and university sphere, awakened to its own interests (a bit too late), protests because its members see that the barbarian ransack of Hungarian scientific and cultural production (and that of the entire region) is next- but ‘the Soros Affair’ is in fact the occasion to wreck the very last little element of the system of freedoms in Hungary. That is why there has been (and will be) a big fuss, because everybody knows that this is already not simply an internal affair of the Hungarian (and Eastern European) intellectuals; what the wider public realized only vaguely and resignedly until now, along with the intellectuals themselves (who would rather flee than be censored), is that the destruction of the Intellectuals actually marks the end of the civilized Hungarian state. In this it becomes irrelevant what big mistakes the liberals, suddenly caught in the crosshairs, have made; or their complicity in how far our country and all of Eastern Europe have sunk into its peripheral-marginal situation.

‘He still wouldn’t dare to do this.’

‘The Hungarian people will not allow it to go this far.’

No one would dare to utter these two statements now, after all this trickery. With the exception of physical violence, ‘they’ would dare to do anything that is anything. Indeed the initiative pursued by lawmakers with regard to CEU shows that Prime Minister Viktor Orbán still wants to close the university knowing that the EU, whatever it may say, will not do anything. And the Trump regime seems impotent in the international sphere and on top of that sympathizes with Mr. Orbán; it surely does not favor an allegiance with George Soros who is part of the domestic opposition. This is why the regime feels it must hurry. Indeed, the devil does not sleep.

The question only remains as to whether the Hungarians of Hungary and the Danube basin can see through this smokescreen: can finally notice that this rhetoric, stamping every oppositional opinion as ethnically and sexually foreign, actually leads to their own violation and victimization. This conflict and those that follow are going to be decided on the streets, because there is nothing else left. The global disgust at the actions of the Orbán government-blending with the colors of an envious wonder in Eastern Europe- is just proof, for the agitprop of the far right, that outsiders hate “us”. In Hungarian politics, as has been shown time and time again, external condemnation of internal politics does not count, or is frankly counterproductive. The democratic nature of public opinion will also not allow the opposition to come from ‘above’ or ‘outside’, nor, for that matter, will it allow itself to be led from there.

The task of opposition is incumbent on Hungarians, particularly the youth and the students.  There is no vindicator above them. As that song goes, neither God nor the King will help. Of this we can be sure.

One Response to The Soros Affair