The Romanian “Parallel State”: The Political Phantasies of Feeble Populism

This article is published in collaboration with the Serbo-Croatian portal Bilten. 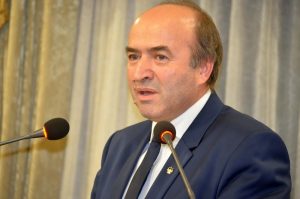 The Minister of Justice asking for Kovesi’s resignation

On the 17th of November 2017, the majority party in the Romanian parliament, the Social Democrats (PSD) issued a statement condemning the existence and practices of the Romanian “parallel state.” This strange notion, with its mysterious air of 1950s spy movies, had already made the headlines in the pro-government press, attracting considerable attention. The party resolution, however, gave it a heightened sense of reality. Suddenly, the most powerful party in Romania’s post-socialist history, the PSD, saw itself besieged by an abstract reality, ­­­ an institutional structure whose contours remained as vague as they were menacing: the parallel state. It was unclear, however, who were the persons or the institutions making up this state. Asked by a journalist to describe the “parallel state”, the president of the party replied with a carefree, enigmatic “yes.” It was hard to make sense of this “yes” grammatically, let alone sociologically. And from the text of the party statement it could only be gleaned that “under the cover of the so-called anti-corruption campaign, the parallel state aims to harass and, in the last instance, decapitate the legitimately elected political power.”

The parallel state was defined not by what it was, but through what it was doing: opposing the Social Democrats through anti-corruption campaigns. It is no wonder then that the critics of the Party saw in this declaration a barely hidden attack on the main anti-corruption agency in the country, the DNA (Direcția Naționala Anticorupție), and its leading prosecutor, Laura Codruțq Kovesi. Fast-forward to February 2018 and the Minister of Justice, appointed by the Social Democrats, holds a press conference in which he officially asks Kovesi to resign. The wavering voice of the Minister, making the whole event sound more like a suicide mission than a press conference, justified the decision with arguments that appeared copy-pasted from PSD’s November statement. The DNA was perceived as waging a war against the government and the political coalition supporting it. Allegedly, the prosecuting agency undermined the constitutional order by preventing the executive power from exercising its rights. It was part of a parallel structure which aimed to deter the elected party from fulfilling its political program.

The logic of the state

Taking our cue from the liberal press it would be easy to dismiss “the parallel state” as a simple propaganda concept, a way for the corrupt PSD to justify its attacks on justice. After all, ever since its electoral victory in 2016, the party has been engaged in an institutional guerrilla warfare to control the courts. And yet, this is hardly the entire story. The PSD is not alone in developing what can be generously called a vulgar sociology of the state while running that state. The notion of the “deep state” aired on the American public scene since Trump’s success, or that of a parallel state present in Turkey, are comparable concoctions. Similar narratives can be found Hungary or Poland, attacking “the liberal institutions” that are allegedly blocking Fidesz’ or PiS’ reforms. This vulgar sociology, accusing the existence of parallel state structures, reluctant to change, points out to a political conundrum, becoming abruptly obvious to populists of different stripes. Different right-wing parties, from the Romanian Social Democrats to Trump’s insouciant Republicans, are suddenly discovering that winning the elections is not enough; that gaining power means waging numerous battles on different fronts, a continuous process which only starts at the ballot box. State institutions have their own logic, their own autonomy, and an electoral victory is just the promise of political success, not its crowning moment.

For those on the left, this is a lesson hammered into our heads ever since the 1930s Popular Fronts, when the first electoral successes ended up in political fiascos, faced as they were with institutional opposition, political violence, or capital strikes. Nothing similar awaits the Romanian PSD of course: its pro-capital stance insulates it from anything of this magnitude. And yet, the Romanian Social Democrats are facing an institutional opposition that most likely won’t cow that easily. Already on the 28th of February the Constitutional Court and the President refused to consider the Minister of Justice’s request for Kovesi’s resignation. The DNA survived, the “parallel state” was still in place: moreover, the anti-corruption agency gained a gigantic symbolic victory. So to a certain extent the parallel state is not just a bogus concept, Romanian politics has an institutional resilience that the PSD has to face and that does not bend that easily. There are institutions they cannot control, an entire state infrastructure beyond their reach. But how should we make sense of this resilience, of the institutions accused by the PSD of running the state “from the shadows”?

From anti-corruption to secret services 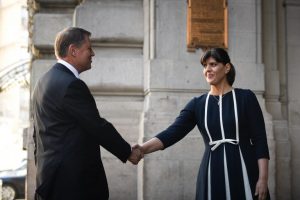 Their main culprit, the DNA, is probably the biggest success story of the centre-right governments dominating the late 2000s. Managing to bring to court high-profile politicians, it has enjoyed tremendous resources and a high degree of institutional autonomy, let alone strong popular support. It was the jewel in the crown of a larger institutional project brought about by President Băsescu in the late 2000s: creating autonomous state institutions, outside the influence of the party system and especially outside the political influence of the powerful Social Democrats. Besides the DNA or the Financial Authority, the project included extensive legislative and financial support for the numerous Romanian intelligence services, as well as increased funding for the Police and the Army. Băsescu’s vision was classically neoliberal: bolstering the repressive institutions of the state at the expense of its welfare functions. And he made no bones out of the fact that these reforms were intended to create a more stable environment for foreign capital, at the expense of local capitalists, perceived as being in cahoots with a corrupt party system. The main beneficiary of this project, the DNA, gained a degree of institutional autonomy difficult to uproot, just as the Romanian intelligence services were shielded from parliamentary control. And it was the rather shady collaboration between the DNA and the intelligence services which boosted the prestige of prosecutors such as Laura Kovesi, PSD’s bête noire.

It would be difficult, however, to perceive these various institutions as a coherent, efficient system amounting to something called “the parallel state.” At the moment, for instance, the relationship between the DNA and the intelligence community is strenuous to say the least: the tensions between them have greatly affected the anti-corruption campaign. Without access to the secret services’ resources, the number of big political names brought to court has dwindled considerably. Meanwhile, the DNA itself is facing its own problems, having to deal with internal abuses, permanent criticism and institutional hurdles. Consequently, it is not the resilience of these institutions that has made the “parallel state” such an important trope in the social-democratic discourse or in the public sphere at large. It was actually the weakness of the party itself, its incapacity to impose a coherent political strategy capable of dealing with them. 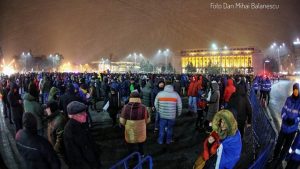 Since the 2016 elections, the PSD has been plagued by internal instability and constant internal wrangles, hidden under inept authoritarian gestures by a weak leadership. This comes in contrast with the efficient way parties such as Fidesz in Hungary or PiS in Poland have managed to behave, imposing a strong party discipline. Visible in the cascading number of governments changed in the past months, the PSD is still trying to manage its local strongmen – regional party leaders with considerable power. In this sense, the illusion of a parallel state thwarting the political efforts of the PSD is simply one way of avoiding the real problem of the party: namely, its intrinsic instability and lack of political efficiency.

Ironically, a political illusion similar to the “parallel state” dominates the other side of the political field. The opposition, from political parties to anti-PSD street protesters, see the party as a coherent, powerful machinery of corruption. For them, it is a strange post-socialist Moloch, whose internal consistency is given not only by the discipline of its members, but by an entire psycho-political profile. Rural voters rooting for PSD as well as its corrupt politicians are seen as the baneful legacy of “communist” Romania, lingering on despite the fall of socialism. Needless to say, this coherence and consistency do not exist: the PSD is fraught with internal divisions, and the sociological profile of its supporters is incredibly diverse and contradictory. And yet, the illusion of a consistent, towering PSD is meant to justify the intrinsic powerlessness of an opposition that has almost no electoral traction. Politically, there is no party that has yet the power and the political weight of the Social Democrats, especially in electoral terms. Similarly, the Romanian street protests, as constant as they have been in the last years, haven’t managed to coalesce in a viable political alternative.

Plagued by internal stability, the PSD is trying to hide its weaknesses by putting the responsibility of its failures on the shoulders of a phantomatic “parallel state”. On the other hand, the opposition, incapable of facing PSD’s electoral machinery, is covering its wounds by viewing the PSD as a Swiss watch of corruption, a masterful magician of state fraud. This leads to a strange deadlock that has been dominating the political scene in Romania: no one has the upper-hand, no one dominates. Not even the Social Democrats who are in power. It is a permanent political stalemate that neither the ruling party nor those opposing it can overcome: not because they are similarly strong, but because they are similarly weak. The only thing that wins the day is an economic consensus both sides support: a pro-capital, anti-labour agenda which has dominated Romania’s policies for the last decades – business as usual. 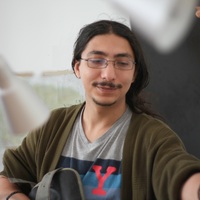 Mihai-Dan Cîrjan is a PhD candidate in the Department of History of the Central European University in Budapest. His research interests include economic sociology, financial anthropology and the history of capitalism in Eastern Europe, with a focus on the first decades after the Great Depression. His current research project tackles the restructuring of the Romanian financial system after 1929, with an emphasis on the state’s sovereign debt and the private debt of Romanian citizens.

One Response to The Romanian “Parallel State”: The Political Phantasies of Feeble Populism