The Protests of June 12: Beginning Russia’s Cold Summer of 2017

Note from the LeftEast editors: The rallies that took place in Russia on June 12 under the slogan “We Demand Answers” are the first political event of the summer of 2017. Translated kindly from the original Russian on OpenLeft.ru by Emma Claire Foley. 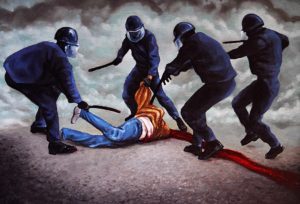 Anti-corruption protests took place in Moscow, Petersburg, Nizhniy Novgorod, Kaliningrad, Lipetsk, Tula, Vladivostok, Norilsk, Sochi, and other cities, a continuation of the high-profile protests of March 26, when people demanded Prime Minister Medvedev answer for his appalling wealth. But it wasn’t as straightforward as that. In Moscow the rally was initially planned to take place on Prospect Sakharov, but was later split up by the decision of Aleksei Navalny, who was not satisfied with the amplification system (he couldn’t find another, he said, because the authorities put pressure on providers who had agreed to rent out equipment). Clearly, what was at stake in this decision was not amplifying the sound but the tension with the authorities. Navalny himself was arrested and given a 30-day sentence. Indeed, the total numbers of arrests—750 in Moscow and in 900 in Petersburg alone suggest that escalation was indeed achieved. The protests were better organized than those that came before, and everywhere they encountered even stronger police resistance. In both cities, they took place against a backdrop of historical WWII-era decorations: field kitchens, Czech hedgehogs and costumed re-enactors added a touch of surrealism. Comrades from Moscow report below about what it was like there:

I was asked to speak on Sakharov, and I was planning to talk about why it seems important to me to support the campaign against corruption despite differences in political viewpoints. Basically, I was going to say that we need to do this so that mass representation of dissent is necessary to stop a reaction, so that the elite wouldn’t think that they can simply crush or neglect to notice anything that gets in their way. There is a common goal now–to restore political freedom. Contradictions are secondary. Considering the scale of the actions across Russia, it all turned out pretty well. It’s clear that people have stopped being afraid and that intimidation tactics no longer work. In Moscow the change from the rally in Sakharov Avenue to a walk in Tverskaya St. was absolutely called for given the behavior of the Kremlin. Everyone who wanted to avoid arrest had the opportunity to do so. There were missteps, but when viewed on the colossal scale of the confrontation, they will not seem meaningful.

Of course, today’s events across the country can’t not be welcomed: a new protest movement is rising up before our eyes, begun by the demonstrations of March 26. This protest today is inseparable from the presidential campaign of Aleksei Navalny, and is indebted to the campaign in its positive aspects as well as its increasingly obvious weak points. Despite the fact that the Navalny campaign could jump-start a wide movement from below, the campaign itself is in fact constructed as a vertical, personalist “political machine,” in which decisions, proposals of a narrow group of experts and approvals by the leader are necessary for the rank-and-file. This kind of structure develops the political consciousness of the majority of participants only to the level that is necessary in each concrete moment of the campaign. The political strategy of the leader, his goals, the meaning of this or that tactical decision, are not up for discussion: Navalny is to be believed in the way one believes in the charismatic head of a corporation. The important thing, by this logic, is that he is personally honest and “has a plan.” On the eve of the authorized Moscow meeting of June 12 the rank-and-file of Navalny’s “political machine” discovered a new element of the plan–everyone had to go to an unsanctioned action, which predictably ended with arrests and criminal charges on the already familiar model of the March 26 actions. 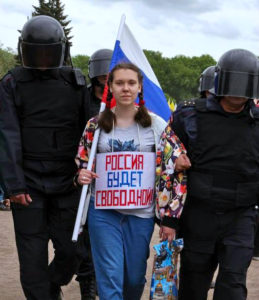 The organizers’ logic is transparent–it is necessary to maintain the momentum of the campaign at all costs, to keep it the focus of public attention and to use the threat of disorder to pressure the Kremlin. More than that, this kind of radicalization of the information sphere drives the whole complex composition of Russian society to a simple scheme of resistance: the thieves in the Kremlin against the honest leader who unites the nation. In this narrative, any form of social self-organization, any social movements are secondary and insignificant, and their long-term interest in the final analysis consists only of whatever it might take to make Navalny president. However, even the most dedicated supporters of Navalny today should take a moment to think: will his campaign become weaker if space is made for internal criticism? Or would this instead create an opportunity for horizontal discussion of the campaign’s political program and strategy, turning from a “political machine” directed by a few into a real coalition, where differences are not fatal and instead contribute to the process of agreeing on shared goals? [For a fuller exposition of the contradiction between Navalny’s highly centralized presidential campaign and the broad mass protest movement, see Ilya Budraitsis’s article recently published in OpenDemocracy.]

“There’s no Sakharov Avenue”–Navalny informed listeners in a morning video address. Navalny’s close associate Leonid Volkov was somewhat more democratic: “There is a special circle of hell for the hypocritical scum who came up with the “meeting of the opposition on Sakharov.”

Yet there was a Sakharov Avenue after all. Those who came out to it were mostly those opposed to the Moscow law on urban development–local activists and people living in homes that were to be demolished, as well as defrauded investors, those with hard-currency mortgages and other casualties of the construction sector. They came out, however, in somewhat fewer numbers than they had on May 14–even taking into account the fact that some of the indignant anti-development Muscovites were out with Navalny on Tverskaya. The protest ebbed and flowed, like the sea, and the mood was placid. These people were older women, families, old men–the kind of people who wouldn’t show up to an unsanctioned protest. They understand that Moscow’s problems are only one issue of the Russian political system, and they are not in a hurry to support Navalny and other registered members of the opposition–because what is at stake for them are not the high ideals of civil freedom, but their homes and property.

At the same time on Tverskaya, young people were realizing that all cops are in fact bastards. In Moscow around 700 people were arrested, and even more photos of courageous protestors surrounded by shiny black helmets flooded social media. The full effects of the protest will be realized only after a whole: if there will be new criminal proceedings, and if so, why. But everyone loves “riot porn” (both looking at it and taking part), though it’s no less effective at dulling one’s feelings than the regular kind. It is for exactly this reason that the protests “for everything good” are dangerous, concentrated around a few middling political goals or figures: not too fat, not too thin, not old but not young either, not socialist and not nationalist, but in general agreeable and better than what came before. In this situation a protest risks turning into a social order unto itself where everything is decided by storm and pressure–not the worst prospect according to some, but a catastrophe according to others. But, like it or not, the proverbial “young Russian people, dreaming of revolution” are now demanding that “Dimon will answer” and hitting the streets.

Today in Moscow we saw two worlds, but they didn’t collide. One, the world of mostly older people, whose property is being taken away and who think of politics as building an urban environment. The second, the world of brave youth (and their slightly older idols), set on regime change. If some kind of democratic politics is to emerge from all this, it it would be best if these two worlds met and acted as one.

One Response to The Protests of June 12: Beginning Russia’s Cold Summer of 2017