The German Greens: Or how they learned to stop worrying and game the ‘poverty migrants’ 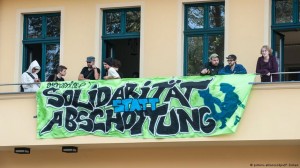 How much are our lives worth?

€1 billion, according to Germany’s Green Party. So high a pledge is reminiscent of a racket, in which a potentially dangerous situation is artificially created so as the mafioso can pretend that s/he is able to protect the victims under threat. The story that follows is that of a racket. It is a story of how the Greens, through their use of the stereotype of the thieving EU migrant (or ‘social benefit tourist’), have aimed to pacify the emerging radical refugee movement in Germany. In effect, they have played these two social actors (the ‘legitimate’ asylum seeker, and the ‘illegitimate’ EU migrant) against each other. In doing so, the Greens have confirmed what we already knew: they are a bunch of bandits ready to sell out labor for small change. Their actions point to a ruse, one that many of us already suspected, in which the so-called ‘poverty migrants’ of the EU periphery and asylum seekers are played against one another in a zero sum game. In this game, the only winner will be capital. Let me explain why.

On Friday, the second chamber of the German parliament passed a deal that would provide the municipalities in the country with an additional €1 billion over the next two years. The move is widely presented as a necessary step to providing municipal governments with much needed financial support in order for them to meet the growing welfare needs of asylum-seekers in the country. But welfare always comes with a hidden condition. The sacrificial offering this time around were the widely-despised economic migrants from within the EU, the so-called ‘social benefit tourists.’ And the one to execute the sacrifice was the Greens. Three things came together on November 28.

The Welfare Law for Asylum Seekers’ in Germany is separate from the Welfare Law for Citizens.[1] This has created much antagonism between political parties on the one hand, and between asylum-seekers and the federal government on the other, as this separation has damaged the rights of refugees to social benefits. The Green Party has played an important role as an advocate on the side of asylum seekers, at least until last Friday.

In 2012, the Constitutional Court decided in favor of asylum seekers by declaring the welfare benefits they receive insufficient. In addition, the court called into question the methods used to calculate the amount of benefits, in effect delegitimizing the whole scheme. After the court’s decision, the amount of money provided by the state for health care benefits for asylum-seekers increased, and for years this decision has been taken under consideration and treated as an exception until a new law can be composed. However, many groups, the Greens among them, have argued that this situation of legal exception has created the possibility for a new provision that will improve the material conditions of asylum-seekers.

And on Friday, the Green Party did precisely this. However, instead of pushing for a new resolution to the problem, one that would allow for equal treatment of asylum-seekers, the party agreed to maintain this increased amount as stipulated by the court decision and simply sign it into the new law. On November 27 the Federal Government and the States agreed to a deal that stipulates refugees are to be taken care of only if the Second Chamber passes the new Freizügigkeitsgesetz-EU (Law on Freedom of Movement) and the Asylbewerberleistungsgesetz (Law on Welfare for Asylum-Seekers). As we will see, this deal reinforced the supposed divide between ‘legitimate’ asylum seekers and ‘illegitimate’ EU migrants. Even though the Greens had the power to stop the madness at this point, they acceded to it by agreeing to the deal. In exchange for their support, the Greens won the €1 billion of municipal funding for asylum-seeker support – that is, the €1 billion that they had already been guaranteed. The asylum-seekers were given something that they already had.

The so-called municipality funding, the ‘€1 billion for refugees,’ was now tied to the passing of the Freizügigkeitsgesetz-EU, which created powers to impose re-entry bans on EU citizens who ‘abuse’ the social security system through their freedom of movement.[2]  Talk about the imposition of re-entry bans on the so-called ‘social benefit tourists’ (Europe’s politically correct term for Romanian and Bulgarian citizens who escaped the continuous effects of a peculiar and detrimental mixture of capital accumulation, dispossession and overexploitation that came with western capital after 1989) accompanied the racialization of ‘poor’ migrants that has been taking place for the past two years. What is a re-entry ban? Nobody knows.[3] In theory, re-entry bans to Germany are to be imposed on EU citizens, who are simultaneously subjects of freedom of movement and suspects of abuse of social benefits. In practice, re-entry bans are close to impossible to be implemented because of that same principle of freedom of movement which continuously feeds western capital with cheap and overexploitable labor.

As such, the re-entry bans are Europe’s way of saying that the capitalist crisis from 2008 is set to reinvent our societies in such a way as to punish everyone who is labeled ‘poor.’ What we are witnessing is a process whereby the ‘poor’ are made fit into a societal category, which warns against ‘social security abuse.’ As the welfare state crumbles more than ever, we are disciplined to both hate the ‘poor’ and fear becoming one of them. The latter is of course integral to the contemporaneity of (neo)liberal capitalism, where competition on the one hand and little redistribution on the other, reign. For now, the ‘migrants’ play the role of the sacrificial offering. But history has given us the lesson that the farce eventually becomes a tragedy.  As ‘poverty’ is a process, from now on European citizens will be very careful not to fall victim to this process. Instead, they will be disciplined enough to undercut whatever and whomever is there in order to be paid a nickel.

We have learned in the past few years that when it comes to welfare we need to keep our eyes wide open to what is coming next and what is swimming under the surface. And if the current decision of the Second Chamber is presented to the public as one that benefits the ‘unfortunate refugee’ against the ‘greedy benefit tourist,’ then we are looking at a general defeat of the working poor. Moreover, the development in question has contributed to what Veit Schwab describes as the ‘Labor/Refugee Divide:’ the discursive differentiation between refugees and labor as found in European migration regime(s).[4]

The Green Party ultimately participates in the making of a limitless pool of overexploitable labor. As Balibar remarks, ‘capitalism is a normalization of overexploitation. The reverse side of this is a class struggle that tends to impose limits, establishing, as it were, ‘normal conditions of exploitation.’ Germany is experiencing unprecedented uprisings on the part of refugees. Hunger-strikes, occupations, marches, protests, civil disobedience erupt in the country every single day. Those who fight refuse the humanitarian label of helpless beings as enshrined in the notion of the ‘asylum-seeker.’ As Germany’s elite is confronted by these emerging and radicalized social movements, it is time for them to make some concessions. The Green Party is not exempt from this anger. Its office was occupied by asylum-seekers in September as the passage of a new asylum law was dependent on the party.[5] And let us not be fooled. The Green Party did not save Germany from the ‘greedy benefit tourists’ by providing for the refugees. The Green Party played the two in a classic ‘divide and rule’ game, making the public believe that the two groups are in fierce competition. The Green Party’s statement that in general they believe the re-entry ban to be morally, legally and politically wrong, but a necessity in order to favor ‘the refugees,’ speaks volumes to the party’s incompetence. 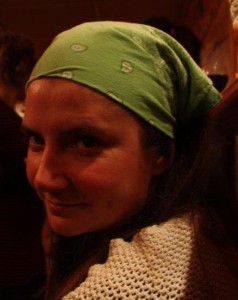 Raia Apostolova is from Sofia and is currently a Ph.D. student at the Central European University in Budapest.

[1] I am thankful to Tobias Klaus for guiding me through the chaos of what Welfare Law for Asylum Seekers is and the stakes involved in the new law which the Greens are guilty of. Certainly, the picture presented in this article is not exhaustive but for now I will leave it at this.

[2] Part of the new Freizügigkeitsgesetz-EU

[3] There is quite a lot of confusion among political circles in Germany in regards to this new provision. There are very many different interpretations when it comes to the re-entry bans and the possibility of their implementation. The confusion stems mainly from the obvious impossibility to apply them because of the principle of freedom of movement. I have written about freedom of movement and its structural relation to Capital and labor migration here and here. As such, my speculation is that the re-entry bans have only a symbolic role for right now. This said, the Left needs to follow closely the developments around the bans as they will certainly translate in material consequences for many.

[4] As described by Schwab, the divide has implications for both the autonomy and heteronomy of migration. For an exhaustive overview of the concept contact the author and he can provide you with the unpublished version of: Schwab. 2014. (2014) “Contested Migration Regimes – Contested Theory? The Neglected Beginnings of a Theoretical Concept”. Contribution to “Contested Migration Regimes: European Perspectives and Beyond”, University Frankfurt (Germany), November 2014.

[5] Similarly to the occupation of Die Linke’s and SPD’s offices by a group of Bulgarian laborers in December of 2013.