The struggle that holds the future of Macedonia

Macedonia in 2015 has experienced the deepest turmoil in its political history of 24 years of independence. In the last nine years the country has been ruled by a conservative ethnic Macedonian political party – VMRO-DPMNE which in coalition with the Albanian partner – DUI created a particular political model of governance in the Balkan region, termed by many as a hybrid authoritarian regime. 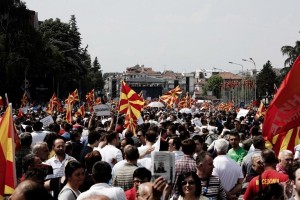 Anti-government demonstration in Skopje on May 17, 2015. SOOC / Konstantinos Tsakalidis

Many internal analysts, journalists, political actors and activists have used authoritarian regime, state of dictatorship and even fascism to describe the rule of the increasingly personalized government of the Prime Minister Gruevski. His government’s policies have applied a dangerous mix of neoliberal experiments in the socio-economic sphere on the one hand and the conservative rebranding of identity through reinstating conservative and ultra-conservative values on the other. It is a project that has been carried out with a strong populist rhetoric, one that managed to “do the right thing for the wrong causes”.

It mobilized a social class that had been excluded from political life in the years of transition. Impoverished mostly by the privatization, this social class, which was considered backward and rural, now gained access to politics. But, all that mobilization went into support for Gruevski’s own ‘privatization’ of the state budget through corrupt projects such as the “Skopje 2014”. With a strong control over media freedom, a tough repression of opposition voices and a devastating social context, protests and demonstrations against the government policies mounted for months, and even years before the current explosion of dissatisfaction.

At the very beginning of 2015, a strong student movement following continuing protests since November 2014 managed to defeat a dangerous education reform proposed and advocated by Gruevski himself. It was the first serious victory of the social movements in the country that had opposed many of the government’s laws and policies. From January until May 2015 there has not been a single week go by without a protest occurring. Journalists, activists for human rights, students, teachers, workers and farmers have been mobilizing thousands of citizens in various actions in the public space.

In the meantime, the opposition party – SDSM started revealing “taped conversations” in which the highest ranking government officials talk about their corruptive and criminal deals including electoral frauds, financial crimes and judicial and media control. The opposition had been absent from the new political stage opened by the social movements mostly concentrated in Skopje, but with a significant resonance and support groups in other cities in Macedonia.

On May 5th a major demonstration took place in front of the government building, with a violent backlash from the Police, which resulted in many being injured and arrested. The following three days were marked by many people taking to the streets organized through activists’ organizations and the grassroots social movement. The main demand was the resignation of the government. One important aspect of these demonstrations was the mobilization beyond the ethnic lines of division in a country where ethnicity has played a major role in the politics of the ethnocentric political parties of the establishment.

On May the 9th, a heavy armed clash took place in Kumanovo, between ‘Albanian insurgents’ and the police forces of Macedonia, resulting in 22 deaths. It will most probably never be known beyond any doubt what and why happened on those two days. In the coming days peaceful gatherings took place close to the Government, while an assembly of the citizens has decided to continue with the resistance while many calls of inter-ethnic unity against the authoritarian Government resonated with the majority of the citizens. Several students and other activists of the protests had been arrested in the meantime. After another major protest on 12th of May, the Minister of interior, the head of the Secret service – cousin of Gruevski – and the Minister of transport and infrastructure – Gruevski’s closest collaborator resigned.

In the meantime, the opposition party – SDSM announced that it will join the protests on May the 17th. As expected it brought together tens of thousands of people demanding the resignation of the government. By the end of the day a camp was set up in front of the government which symbolized the defiance of the protesters against Gruevski who himself organized a rally in support of his rule the following day.

Following the mass demonstration on May 17th there was a period of decreased resistance, which can be explained by the initiation of negotiations between the main political parties in the country. With the international community intervening to mediate the process, mainly under the guidance of the European Union, the situation took an unwanted shift. In the eyes of the intervening international community the political crisis in Macedonia was interpreted as a conflict between two political parties and not as a result of the dissatisfaction of the citizens against the authoritarian, corrupt and criminal government of Gruevski. The opposition party suddenly found itself under pressure of the international community (EU) to make concessions in order to reach a compromise to the political crises.

It became clear that the move of the opposition party inside the civic demonstrations was a wrong strategy since it brought them into the position of a negotiating party in a setting which was not favorable to them and even less supported by the social movements. In the meantime a split occurred between two groups of activists one side of which agreed to take part in the citizen coalition led by the opposition party – SDSM, while the other claimed that the need for a united front remains in spite of the origin and form of the revolt. It proved that hiding under the ‘citizen’s umbrella’ did not work for the opposition, and they were the ones invited to negotiations as a single political party. A much more favorable situation would had been one in which the SDSM would have kept distance from the social movement, a significant part of which it succeeded to coopt. In such a case the pressure would be focused on Gruevski and his party, which would also be beneficial for the opposition.

On the 2nd of June after another round of negotiations between the political parties, a deal was reached to organize elections on April 2016 with an intermediary period which would guarantee the conditions for free and democratic election. Nothing is yet known publicly on the details of the deal which seems to address a second phase of the solution, while not mentioning anything on the resignation and accountability of Gruevski. The next round of negotiations took place in Brussels on the 10th of June with an aim to settle the format of the intermediary government, however it ended without an agreement.

Meanwhile, the social movement is organizing a new wave of protests and demonstrations pursuing its declared demands for resignation of the government of Gruevski, holding those involved in the crimes and corruption responsible and opening of a process of democratization of the institutions.

Parallel activities and protests are taking place by the coalition led by the opposition – SDSM and by other groups mainly consisted of leftist activist organizations who see the diversity and plurality as the main values of the struggle for justice and freedom. One thing seems certain in the aftermath of these protests: never again in Macedonia will a political party be able to concentrate and abuse state power without facing a strong resistance from the people. Whatever the political solution will be, the future will not resemble the past.

Note from LeftEast editors: The  article originally appeared in BCS on Bilten.org on 09 June 2015.