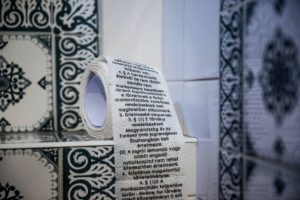 Somebody placed a toilet paper with the labor code printed on it into the man’s restroom in the Hu Parliament. Fotó: Berecz Valter.

While demonstrations in Budapest and international reactions expressed outrage over the Hungarian Government’s attempt to shut down Central European University (CEU), on 11 April 2017, the Economic Committee of the Hungarian Parliament was also proposing legislative amendments to the Labor Code. The amendments – to the Labor Code, which is already often referred to as the “slave-labor law” (rabszolgatörvény) – would enable an even more flexible, employer friendly use of working time, especially in the production segment of manufacturing. Instead of the currently, already very flexible reference period of 12 months, the new legislation proposes a 36 months long reference period. The reference period means that the employer can unilaterally decide about the daily, weekly, monthly, and even annual working time schedule of an employee – i.e. if (s)he is to work a daily 8 or 12 hours, 3 or 6 days per week, etc. Moreover, non-standard, continuous work schedules, or shift-work is common in metal manufacturing. Calculating with oscillating production cycles, the three year reference period would annul most overtime bonuses too, and thus cut worker earnings. After unions emphatically opposed the amendments to further increase employee vulnerability, by April 25 the Committee withdrew the proposal. How are we to understand this incident in the context of labor relations in contemporary Hungary?

Already without the latest proposed amendments the existing labour legislation is far from employee-friendly. Taking a long duree perspective, postsocialist regulation of labour relations has generally been driven by employer demands for higher flexibility as a precondition for maintaining employment (strategically placing workers between a rock and a hard place, in an assault usually backed by narratives of increasing competitiveness, modernization, superior rationality, etc). Resembling the spirit of the clauses regulating labour relations in the late 19th century, and also the original ““slave-labor law” (rabszolgatörvény) of 1898 that regulated agricultural labour, the Labour Code introduced in 2012 in many respects is hypocritical and liberal. Namely, it stresses the premise of equality of parties and stresses individual bargains between employer and employee, while silencing the importance of collective bargaining. The legislation presupposes equality of the contracting parties, whereas in reality, those who are hired to work, that is, have to work in order to survive, are in an unequal, dependent position to employers. Strike legislation in 2011 also makes it quite difficult to launch collective action. Conditions of collective bargaining are easy to establish, but only if it serves employer needs. All in all, the position of most (potential) employees in production is vulnerable.

The current Hungarian government combines a hostile attitude against relatively autonomous social groups, it strategically engages in power struggles in certain, more regulation and service driven economic sectors. More recently, it also started domestically a rather aggressive discourse against the EU. Simultaneously to these, it fully pleases requests of large employers in the export driven sector, especially in the automotive industry. Of course, proposals to regulate labor relations come only after new practices have already been introduced.

As we know, industrial production is the big lord in Hungary, which the lackeying legislators typically try to please ex post. Last year, in many Hungarian manufacturing plants it was common that the 250 annual overtime limit was broken already before the end of the year. Unable to hire new workers, manufacturing plants would typically continue production, and management would rather pay (symbolic) fines for breaking regulations. Some employer organizations therefore publicly (!) complained that the problem is that ‘people’ cannot work enough. The practical conclusion they drew from this? The legislation of 250 extra-working hours is not enough, and employers needed to solve this “problem” with tricks!

But let’s consider what consequences might a tense, or from the employer perspective, an increasingly flexible work regime have on a worker and on the society.

Reproduction of the asocial employee

Let’s start with a central assumption of the dominant local liberal narrative, the assumption of individualized employees, or in literal translation from Hungarian the “labor undertakers” (munkavállaló). ‘Individual’ employees are asocial beings, who just happen to be there, whose daily regeneration presupposes only fulfilment of physiological needs. His or her regeneration needs water, certain input of calories, certain hours of rest, sometimes medical (or rather: pharmaceutical?) treatment, and perhaps, body exercise. Since production workers in Hungary typically do not earn much more than a minimum wage – which is below the living wage! – they typically depend on various bonuses, overtime or achievement based elements of pay, in order to make ends meet. But even our asocial, immobile employee does not last: his or her body and functions of the nervous system wear out. S(h)e needs to be not only maintained but eventually also replaced… Thus an employee, who is an atomic member of a society of individuals, needs thus also to reproduce, or find a younger replacement from somewhere. He or she has to have offspring, a family, which is, somewhat more difficult to consider ‘atomic’ or asocial – since many needs suddenly emerge, and our head starts to hurt from brining in all sorts of needs and calculations…

Our asocial worker has to choose: if (s)he does not comply with the flexible work regime – (s)he does not have enough to eat. If (s)he complies, (s)he would have serious doubts whether (s)he can have enough rest, can regenerate in the medium or longer run, reproduce her/his labour for the next days, and reproduce her/his labour also through future generations. Such a worker, especially if (s)he has a family, thus cannot fulfil her/his basic needs for reproduction.

Workers are, however, social, and their labour is social too. Workers do have other social needs, and also, frustrations.

Social reproduction is not a popular expression. But nowadays we hear little even about the broader issue of workers wellbeing in Hungary, an issue that was still popular under state socialism. In our everyday life we see though that certain stresses and frustrations are being reproduced daily. My point here is that there is a social group of relatively isolated, socially barely visible production workers, whose mobility is mostly limited to commuting between home and workplace. Their acquaintances, friendships and marriage possibilities are increasingly narrowing down in the space of the “bread-giving” enterprise. Their life space, vertical mobility opportunities to come out from a narrowing, increasingly limiting space are limited. The space seems to work as a vertigo: those who cannot fight for their rights (e.g. via a responsive trade union) or have an exit option are predestined to sink. They are sinking, but this sinking is also a social phenomenon, as it affects society. Institutionalized injustice that happens to a part of society will eventually affect the whole society. But let’s keep in mind that a society that willingly allows a social group to undergo such processes is an unhealthy society. I still believe that Hungarian society has some strength to rediscover its real values.

One must also mention that social awareness and critical knowledge on the hardships and social life of workers is quite low in the milieus of the relatively privileged, in university towns, or in the capital of Budapest, e.g. in the urban middle class, on what is going on in the countryside. We know very little about children who see their parents mostly or only for the weekend. Children who will grew up as semi-orphans and will have limited social capacities as a result. Thus, it’s important to record, inform and communicate, and reflect on what is going on, and what and how these developments determine the future of our society.

Many forget, even some trade unions themselves, that labor unions are not only interest representative, member-self-help, or self-servicing organizations. First and foremost, the first function of trade unions is social. That is, trade unions have a tremendous social role and responsibility to gather information, communicate to the public, and act in any situations which are related to work and employment and which have alarming social consequences. Trade unions have to safeguard issues not only related to the immediate life and safety of workers (safe working environment, impact on health etc.) but also those that have broader social consequences. Already now an employee who depends only on his or her wage can have very little opportunities for achieving what they would consider a decent life due to increasingly tense working time arrangements.

Therefore, Hungarian trade unions, and most of them already did, reacted sharply against the newly proposed regulations. They reacted most likely also because they are interest representative organizations: plant level unions – which try to protect their members as well as employees of the whole company – will lose significant bargaining power against the management if the new legislation comes into force. They cannot fight easily against unilateral working time regulations. But as social actors they should strive towards greater presence in Hungarian public spaces and engage in more detailed sharing of information and communication with other social actors and groups, outlining and warning against the social consequences of exploitation.

Some Hungarian plant level and regional trade unions have overcome isolation, successfully coming out from behind their factory gates. Especially the successes of the publicly covered strike at Mercedes in November last year received a significant social echo. However, strikes usually do not engage at this level. If a well-informed and sufficiently organized plant level trade union reaches the stage of launching a warning strike, they reach a point where they showed their strength to the employers, and typically their immediate demands are immediately met. Nevertheless, a great pity remains that the fruits of such collective action remain mostly in silence, the revealing knowledge about the importance of communication and self-organization does not reach wider segments of the society. Trade unions, those smart and autonomous enough to do so, might continue winning small battles in the periods when tides change to their advantage. However, in preparing for the not so good times, and also in exerting a greater influence, trade unions need to be more present, more active in society, and become more social.

Based in Budapest, Tibor T Meszmann, is a researcher and activist. His work and studies mainly focus on collective labour rights, unionism, industrial relations, and employment policies in postsocialism, focusing mostly on Hungary. Tibor is an independent researcher, who collaborates with various local and international research institutes.  He is also active in the AnBlokk  Association for Cultural and Social Sciences, member of the Public Sociology Working Group “Helyzet”, and tutoring teacher at the Mérei Ferenc College for Advanced Social Sciences.