Seven points on the local elections in Berlin

Note from LeftEast editors: The 18th Berlin state election was held on 18 September 2016 to elect 149 members to the Abgeordnetenhaus of Berlin (Berlin state parliament). We publish here a 7-point commentary by Gal Kirn.

A few after-thoughts on the local elections in Berlin: 67% of people went voting, which is more than in 2011. My comment seems more negative than positive, but not “alarmist.” Let’s start with the positive:

1.CDU-SPD ruling coalition, which was founded on security, and attracting outside capital, lost. In terms of percentage, both parties are at a historic low: SPD 21.6%, CDU 17,6 %, respectively — losing around 11%, with the losses going to either Linke or AfD. There will be no grand coalition, even if FDP entered is included. The most probable coalition is then SDP (21,6%) – Linke (15,6%) – Grüne (15,2%). This is now seen as building of strategy to defeat CDU and Merkel domination next year. I will come back to this strategy later, and examine it critically. Those on the extreme-right together with the anti-refugee crowd voted for AfD (still 14,2%! result, very close to Grüne and Linke). FDP is back, The Pirates flew away. 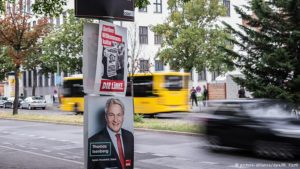 2.Apart from AfD, Linke is the only established party that did much better, gaining around 4% of votes. It did so mainly by making inroads in the centre of Berlin, taking away votes from SPD, Grüne and the Pirates (the latter practically disappeared, receiving 2%). They did fight mostly around issues of social justice, but also started mobilising around anti-racist discourse–this is definitely a strategy that needs to be massively upgraded also by showing a real alternative outside the liberal-democratic frame that the Red-Red-Green coalition shall be probably practising.

4.Some bad news for Linke and the left in general: In all the areas of periphery, you will see the black (CDU)-blue (AfD) ring around, but especially the blue areas on the East that were traditionally voting for Linke, AfD received a huge boost, and is the first party, with close to 30%. The centre-periphery axis is revived: this can be explained by comparing results – mobilisation of new and disappointment with the old parties. Think also of something else: periphery can be both rich (West votes for CDU and less for AfD but for FDP-neoliberals), and very poor (North, East, Southeast,…), where you have the most striking polarisation on far left and far right. (See map above.) Thus, the split between West and East is not as hard it used to be. Now polarization takes place along this centre-periphery axis.

5. In the prism of periphery-core, the Centre of Berlin is indeed very progressive. Moreover, it has even mobilised more than before; there are places that AfD and CDU acquired less then 10-15% together, and they did particularly badly among the (millenials) first-time voters. However, the periphery has areas where CDU and AfD come strong first, and together amount to more than 50%. This is indeed the where the Left as a whole has failed the most: peripherialisation, dispossession, and evictions were effectively mobilised towards the fear of other, against refugees, and other minorities.

6. I think that as an electoral strategy a Red-Red-Green coalition might help defeat Merkel in general elections. What worries me is what happens next: in coalitions, these three parties have tended to seek the least common denominators, privatizing social housing in the case of the previous red-red coalition in Berlin or becoming enthusiastic gentrificators, which was the experience of the Green-dominated municipalities of Kreuzberg and Friedrichschein. However, without a radicalisation of their social program and much more open stance on migrants and refugees, this electoral and coalition strategy will in next 5 years only strengthen AfD. I don’t see the economic crisis, the refugee “crisis,” austerity politics (the question of PIGSS et al) and other EU-capitalism related problems disappear in next few years. I also don’t see how the war in Syria will end soon and Erdogan disappear; I also see the media continuing to give massive amounts of space (and free propaganda) for AfD, and also many instances where representatives of other left parties even adopting some of the ideological rhetoric of AfD.

7. The time of underestimating AfD is hopefully gone. To be now satisfied with the results from yesterday would be a grave mistake. Just a month ago in Berlin they were predicted to get their 8%, but ended up receiving 14%, and will continue to grow in influence, taking local and other municipal offices. 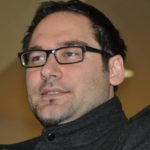 Gal Kirn currently lives in Berlin, where he is affiliated with the Institute of Critical Inquiry (ICI). In his hometown of Ljubljana, Slovenia, he is a member of the Initiative of Democratic Socialism and Workers’-Punks’ University. He co-edited the book Encountering Althusser (Bloomsbury, 2013) and Surfing the Black. Transgressive Moments in Yugoslav Cinema (Jan van Eyck Academie, 2012) and edited the publication Post-Fordism and Its Discontents (JvEAcademie, 2010).