Serbia’s election outcome: More of the same or worse? 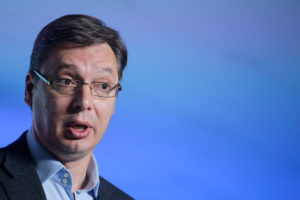 Serbia held early parliamentary elections on 24 April 2016, the second set of early elections in just over two years. Serbian premier and leader of the Serbian Progressive Party (SNS), Aleksandar Vučić, appears to have believed that, with the opposition in disarray, and his own popularity still sky high, he could win an even more resounding victory than on 16 March 2014.

The election result, with 98.56% of votes counted, has dashed Vučić’s hopes. Percentage-wise, he almost succeeded, with the coalition around his SNS winning 48.23% of the vote, just short of the 48.35% two years ago. Votes-wise, Vučić claims success. Since voter turnout rose slightly, Vučić in fact increased his coalition’s tally, claiming roughly 100,000 votes more than in 2014.

Given his government has passed some painful cuts and unpopular, anti-worker legislation, this is on its own terms remarkable. Nonetheless, this is far from the success story the SNS had hoped for. Last time, only three other major party lists had crossed the five-percent threshold. This time, it was six. Although only one other coalition besides the SNS made double digits, last time’s runner-up, the coalition around the Socialist Party of Serbia, with 10.98% (as against 13.49% last time), the presence of five other coalitions reduces significantly the SNS coalition majority in parliament.

Despite the scale of its victory, then, the SNS coalition can count on only 131 out of 250 seats, compared to 158 last time. Taking into account that the smaller parties on its list will also receive parliamentary representation, current projections put the SNS itself on just 98 seats. This suggests its rule will be even more hampered by coalition politics than in the outgoing parliament, a fairly docile one by all accounts.

What has Vučić done, where is he going? 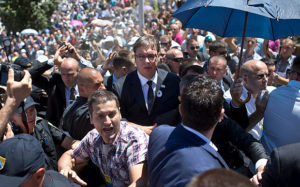 Vucic was attacked with stones and other objects during his visit to the Srebrenica memorial complex in Potocari. (Marko Drobnjakovic/AP)

In power, the SNS had tried to move away from its leaders’ extreme nationalist views of the 1990s, and it can be expected to continue to do so. Vučić last year visited Srebrenica to publicly distance himself from his association with his former party’s Greater Serbia politics. Though forced to flee the remembrance ceremony, he presented himself as a peacemaker, moving forward, rather than looking back. Indeed, Vučić, acting against his former party boss, and current president of the country, Tomislav Nikolić, moved closer to the West, without, though, fully dissociating from Russia.

Thus, Serbia has signed a logistics support agreement with NATO and opened several chapters in negotiations with the EU, while never fully ditching Russia. So, while Serbia never recognised the annexation of Crimea, it never imposed EU-led sanctions on Russia, and in fact even bought military hardware from Moscow. Serbia needs Russia, as it continues to normalise relations with Kosovo, but refuses to recognise independence. The Russian veto in the UN remains important for Serbian foreign policy. Nonetheless, Vučić has successfully tilted West without losing the East.

This tough balancing act has so far worked for Vučić, as he continues to win plaudits from Brussels and Berlin. Indeed, he continues to follow domestically the recipes handed down by the International Monetary Fund. Vučić received praise for his performance and compliance with the terms of the 1.2 billion euro loan from the IMF in February, but the IMF underlined the government still needed to reduce its public sector and restructure its loss-making state firms. Vučić promised in his election campaign that he would deliver on these reforms.

External bodies and funders have been less fussy about the government’s record on democracy and the rule of law. Anti-corruption moves have been aimed almost exclusively on officials of previous governments, journalists complain of bullying and restrictions, and far right groups have found new wind in their sails under Vučić. Even Vučić’s populist move to hold early elections did not prevent words of support from Western actors, most likely because they prefer a strong, pro-Western government completing a tough neoliberal reform package to democratic governance.

Does Vučić have an opposition?

Vučić will not have principle opposition to his policies in parliament, though it may prove more difficult to implement his policies, as more actors will have the ability to opportunistically cause the government embarrassment. It remains to be seen whether he has more of a grip on his own party, following a showdown with the supporters of the president of the republic, Nikolić. His allies will also presumably demand a higher price for their services, to deliver the majority won at the ballot box.

But all this will mean Vučić will be tempted to play his allies off against each other and possibly, like after the last election, draw in external support from other parties and coalitions to shore up his own position. Whether his erstwhile allies in two governments since 2012, the Socialists, will hope to continue in government or position themselves as a government in waiting remains a major question. Early indications are that Vučić is not enthusiastic to continue cooperation. 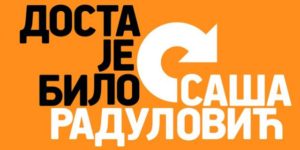 Vučić may therefore try to win others over to his governing coalition. There are, for instance, eight parties among the three main liberal coalitions to cross the 5% barrier. One, called ’We’ve had enough!’ (Dosta je bilo!) is in fact led by a former Vučić finance minister, who has billed himself as the uber (neo)liberal on offer. The level of politics coming from the liberal parties during the election campaign, moreover, was exceptionally low. Their response to Vučić’s antidemocratic reign has been to reduce their campaigns to an anti-Vučić message, with no policy differentiation whatsoever. Since Vučić took over most of their policies in the foreign policy and domestic economic spheres, it should not be impossible to see some of them tempted by government.

Yet whether the price will be too heavy for Vučić remains to be seen. Two other major coalitions to pass the 5% barrier will more likely be more consistent opponents, if only because their geopolitical orientation on Russia defines their political trajectory. Vučić’s former party, led by Vojislav Šešelj, acquitted by the Hague Tribunal of war crimes, despite obvious guilt, looks like a corpse led by a man in advanced stages of cancer. It is, however, a party which will raise political tensions in Serbia and the region, reviving the rhetoric of wartime and opening spaces for violent and racist politics.

Also worrying is the entrance in parliament of a coalition of the conservative Democratic Party of Serbia and the proto-fascist “Dveri”. Though Vučić may be able to lean on these parties should he wish to occasionally support Russia in foreign policy, he will more likely use these parties as a warning to the West that alternatives to him may indeed exist in the form of much nastier, pro-Russian parties. To what extent a party like Dveri can be controlled is an enigma. As social discontent will inevitably rise with privatisation and cuts, Dveri may be the party that attempts to garner support through xenophobic campaigns against foreign-imposed policies.

Sadly, the left in Serbia has failed to move significantly forward since 2014. The apparently left split from the Democratic Party that set up the new Serbian Left ran a schizophrenic campaign with mixed liberal, right-wing and left-wing messages, winning a derisory vote of less than one percent. Meanwhile, the Left Summit of Serbia, which united most of the activist and NGO left, and participated in union-led mobilisations against Vučić’s privatisation laws, remained focused on internal affairs and did not make headway in the last period. Possibilities for intervention in struggles and contestation of both government policy and rightwing mobilisation will clearly remain, however, but only time will tell whether the left will be able to intervene successfully, and introduce a badly needed, class-based alternative to neoliberal austerity, imperialist integration and nationalist backlash.