by Anna Nizhnik and Konstantin Kharitonov 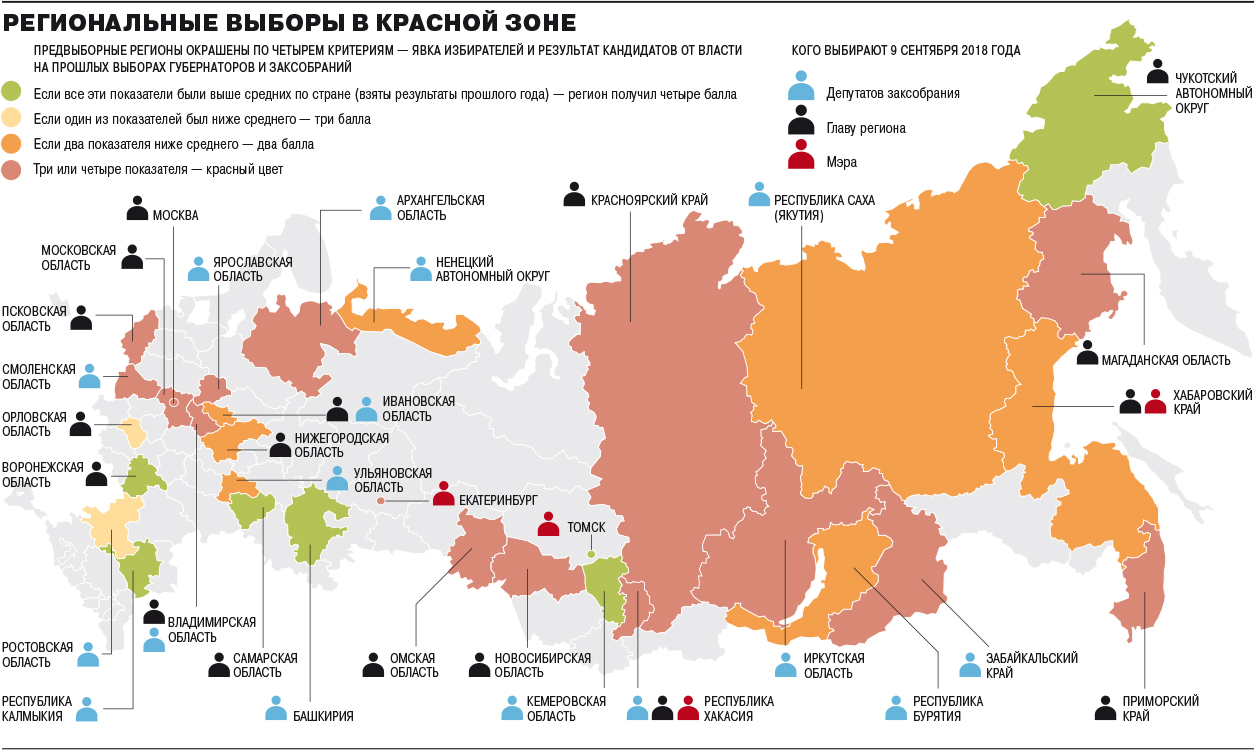 A map of regional elections, September 2018. Courtesy of kommersant.ru

September 9, 2018 saw regional elections on a massive scale in Russia, with 4,000 representative seats, at various levels of government, at stake: special elections for 7 deputies in the lower house of Russia’s parliament, the State Duma; 26 of the 85 heads of regional governments across Russia; as well as elections to regional parliaments and representative organs of administrative centers.

Elections in Russia long ago ceased to generate any hopes of real, practical potential for change. The results, as a rule, are known in advance – and in the unlikely chance of an authentic “struggle,” it’s intevitably over an unimportant post. The political field in the country was sterilized long ago, with state organs held under the strict control of the ruling party, United Russia. The parliamentary opposition has succeeded only in the fine art of blowing smoke while the extra-parliamentary opposition is permitted to participate in elections only in exceptional cases. One obvious result is the pitiful voter turnout rate, kept so low even in spite of the fact that many state employees, who rely directly on the state apparatus for their livelihood, are driven to vote almost by force, ordered by superiors to cast their ballot for the “correct candidate. ” Pro-Kremlin political scientists see these doctors and teachers as a “subordinate estate,” choosing not to see them as a coherent political subject. 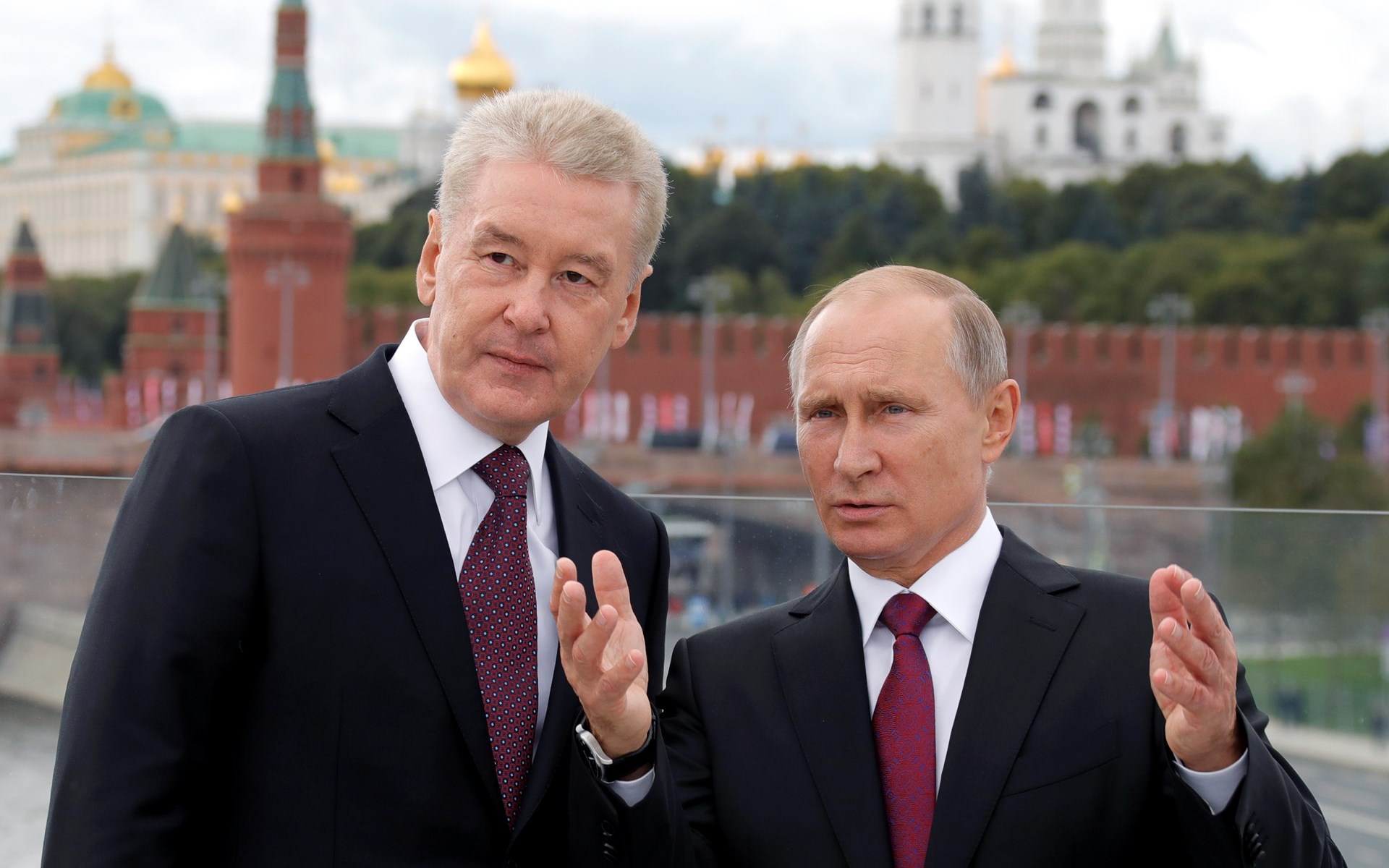 In the interior of the country, among all the falsifications, voter turnout barely hit 40%. It should be noted that the local political specifics in Russia differ strongly from region to region. For example, in the Kemerov Region gubernatorial elections, where administrative power is traditionally strong and consolidated, turnout was 66%, while in the Moscow mayoral elections, where current Mayor and reliable party functionary Sergey Sobyanin predictably clinched victory with roughly 70% of the vote, turnout barely reached 30%. Meanwhile in the Tomsk mayoral elections and special regional parliamentary elections in the Kaliningrad Region, voter turnout was closer to 20% – and in the Saratov Region, only 16%. Even the pension reform announced following presidential elections in March 2018 (and amid the noise of the FIFA World Cup in Russia), which proposed an increase to the retirement age, failed to stimulate a greater number of people to get out the vote. Although the parliamentary opposition called on the electorate to express its mistrust of the ruling party at these elections, campaigns against the increase to the retirement age were conducted so vaguely and disparately that there was no hope of the elections bringing any real change in the country.

As a result, there were no surprises in the majority of the Russian regions. This, even in spite of the fact that United Russia showed up to the elections carrying the least popular social reform of the last decade, along with less-than-stellar recent accomplishments in foreign policy (Crimea, Syria, Ukraine). Although the general quantity of votes for United Russia decreased, in the majority of regions, the ruling party won anyway. The opposition increased its presence across regions, but took a majority practically nowhere. For example, in the Yaroslavl Region, with 29% turnout, the Communist Party (which long ago failed to hold any common ground with real left theory and practice, instead constituting a crucial element of political stability under Putinism) took 24% of the vote against United Russia’s 38% – an increase of 100% over its result two years ago. The Communist Party was able to increase its presence to 11 deputies, though United Russia remains in control among the 32 seats. Simultaneously, the Communist Party took a majority in three regions: Khakassia (Communists 31%, United Russia 25.5%), the Irkutsk Region (Communists 34%, United Russia 278%) and Ulyanovsk (Communists 36.3%, United Russia 34%).

Gubernatorial elections in four regions produced unexpected results: those in the Republic of Khakassia, the Vladimir Region, the Khabarovsk Krai and the Primorsky Krai. This is only the second instance of a second round of gubernatorial elections (where a second vote is held if neither candidate collects more than 50% of the votes) since 2012; between 2005 and 2011, the regional heads were boringly appointed by the Kremlin. The only oppontents of the ruling party turned out to be representatives of the Communist Party and the so-called Liberal Democratic Party of Russia (LDPR) (a right-populist party which also tows the Kremlin line). 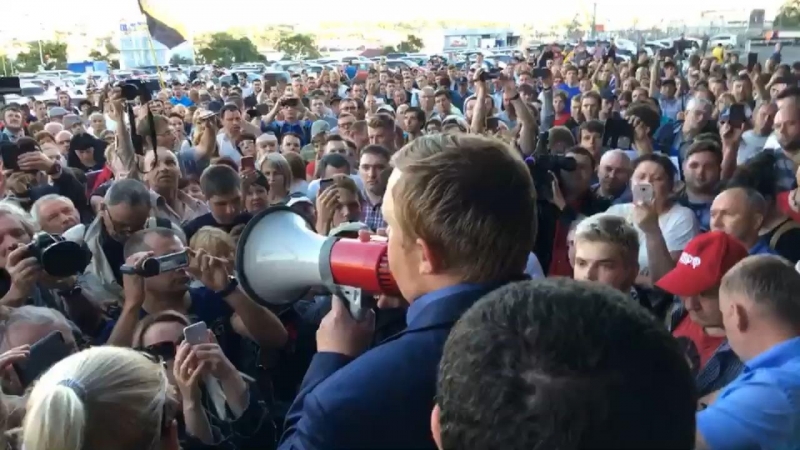 Andrey Ishchenko speaking to supporters protesting the electoral fraud that cost him the second round of voting. Courtesy of mayday.rocks

The second round in the Primorsky Krai, held on September 16, managed to stir up the political community. The Communist Party candidate Andrey Ishchenko was ahead of the United Russia candidate Andrey Tarasenko, an entrepreneur and manager appointed by the Kremlin, by 5-7% with 95% of votes counted. Suddenly, everything changed in the course of an hour. After accounting for 99% of the vote, Tarasenko abruptly became the leader with 49.02% of the votes; Ishchenko was left with 48.5%. And thus began a row. The Communist Party candidate, outraged by the falsification, called the irrpelaceable head of the party Gennady Zyuganov in Moscow and initially asked his supporters to the streets. Zyuganov followed with loud, indignant threats to summon some kind of “parliamentary commission” to the Primorsky Krai. Meanwhile Ella Panfilova, formely a well-known liberal human rights activist, and currently the head of the Central Electoral Commission, burst into tears while speaking about how much effort had been put into conducting fair and transparent elections. Despite these attempts to pacify them, outraged and stung by the apparent fraud and bought votes, Ishchenko’s supporters gathered in protest on the streets of Vladivostok, the region’s administrative center and main city, for days. Everyone was indignant, wondering how this could happen, and what to do now. In the end, the results of this apparently rigged vote were canceled after quiet backstage negotiations – and a new round of the electoral orgy will have to pass within three months.

Second rounds of voting in the other two “problematic” regions were held on September 23. According to the results, LDPR candidates took the gubernatorial vote in both the Khabarovsk and Vladimir regions, with Sergey Furgal taking 69.57%, and Vladimir Sipyagin taking 57.03%, respectively. The official powers have attempted to save face in light of these victories with soundbites about Russians’ revived faith in democratic elections. The heads of the parliamentary opposition parties, which in Russia are more the opposition de Sa Majesté, were suddenly startled like old warhorses at the sound of a trumpet, coming to with half-forgotten formulas like “not a step back” – as said by LDPR leader Vladimir Zhirinovsky, who long ago transformed from a politician into a mainstay on Russian talk shows.

Meanwhile, United Russia withdrew its candidate in Khakassia, with a second round having taken place on October 7, and the Communist Party and A Just Russia (a quasi-social-democratic party created by the Kremlin, which provides absolute support of Putin policies) will supply the candidates for governor.

Zyuganov called the Primorsky Krai elections “nonsense” and an “outrage” — a rare declaration for the Kremlin’s communist party, for which even the most modest criticism of Kremlin initiatives is usually off limits. The fact is that these rare victories please Russians not so much because they truly view themselves as banner-bearers for the Kremlin’s captive opposition, as much as because of United Russia’s loss. That was the take from one elderly woman who voted for the LDPR candidate in Khabarovsk: “for the first time in 30 years, the one I voted for won.” And this, of course, a modest result of the growing mistrust of the ruling party, which, due to the lack of any public politics, manifests in strange ways.

At any rate, though, these local successes cannot influence the official political course: in the Duma, as with most local authorities at all levels, United Russia holds an absolute majority (more than 50%), allowing it to effect changes to the electoral code and even stop such any such ephemeral threat to the stability of the regime. For example, it can deprive the parliamentary opposition help in passing the so-called “municipal filter” needed to be nominated for a municipal-level position. The Kremlin thought up this procedure in 2012, when mass democratic protests were beginning across the country. In accordance with this law, only candidates supported by municipal deputies can run for regional governor. Since most municipal elections are held with more or less obvious administrative assistance from the ruling forces, and attract much less attention than, for example, parliamentary elections, the “excess” candidates are eliminated without much noise. In this connection United Russia made agreements with the parliamentary opposition: their candidates entered the elections as controlled spoilers who would not claim victory. But if it becomes clear that the protest vote against the ruling party could unexpectedly (and even undesirably) change the political game for all its players, the Kremlin can reverse course. Neither the LDPR, nor the Communist Party – even if attempting to breach this agreement with United Russia – would be able to independently find enough supporters among the municipal deputies or the population, having already lost all political skill long ago.

The top United Russia functionaries were hardly shocked by the total lack of public support. The current Duma makeup will remain until 2021, meaning that any given proposal supported by the government can pass. Politics, therefore, must move to the streets. Partly, this has already happened in the form of protests against pension reform, when the regions showed much greater readiness for mobilization than traditional, apolitical Moscow, where many people retain small privileges and, at the same time, control is much more consolidated. All the same, the National Guard (which reports to the Preident) is buying up new equipment and training, while it still can — thus, 600 people were detained during street protests in St. Petersburg on September 9.

The elections showed that discontent is growing, but the Kremlin still has time to come back or to crush any indignation as the opposition structures that are able to organize and channel this discontent into an active political current are weak or completely absent. Meanwhile those that do exist are not ready for the joint actions that are so necessary in conditions when “high,” parliamentary, and party politics in the country can determine only the distribution of contested managerial positions among different members of the elite.

Translated from the original Russian by Thomas Callahan. 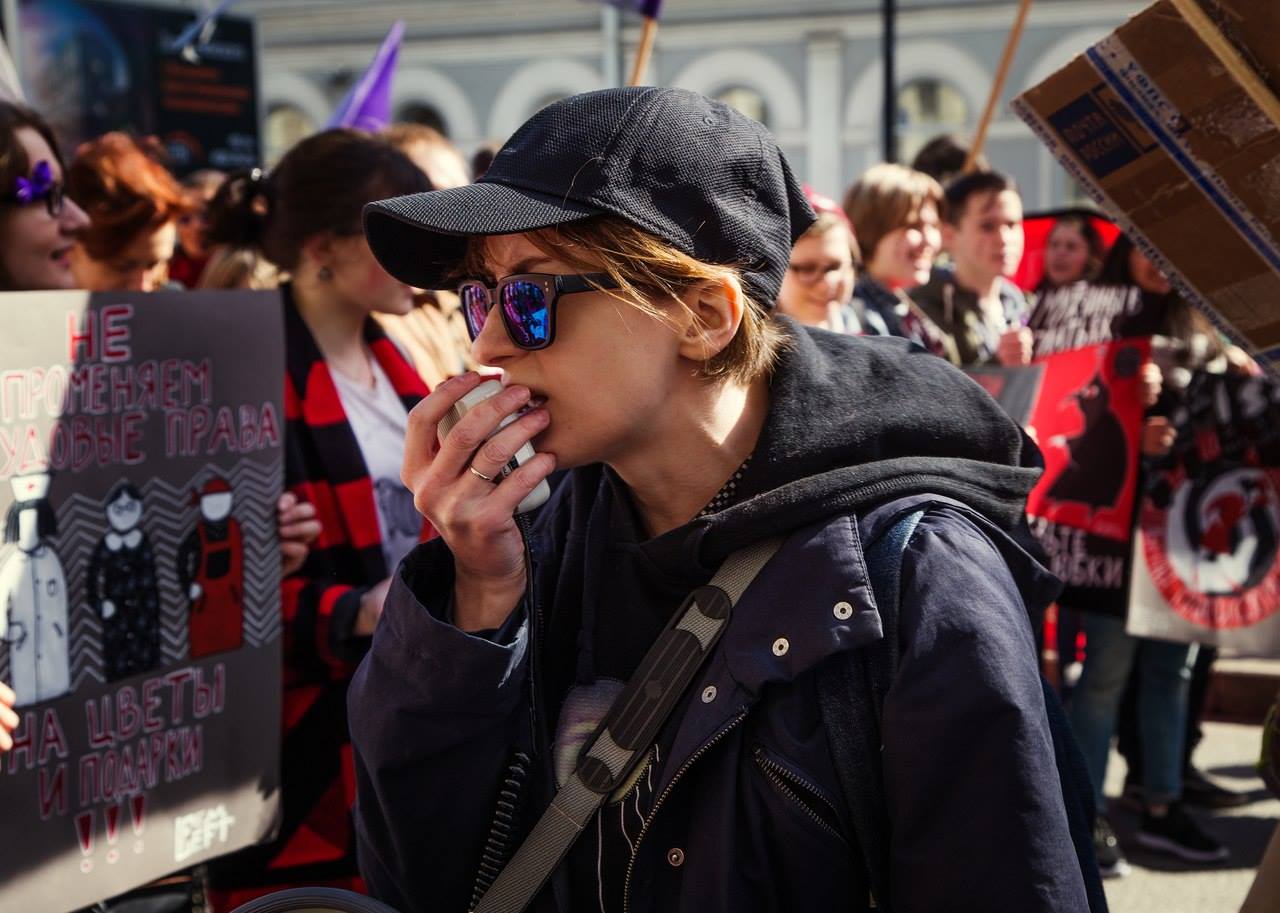 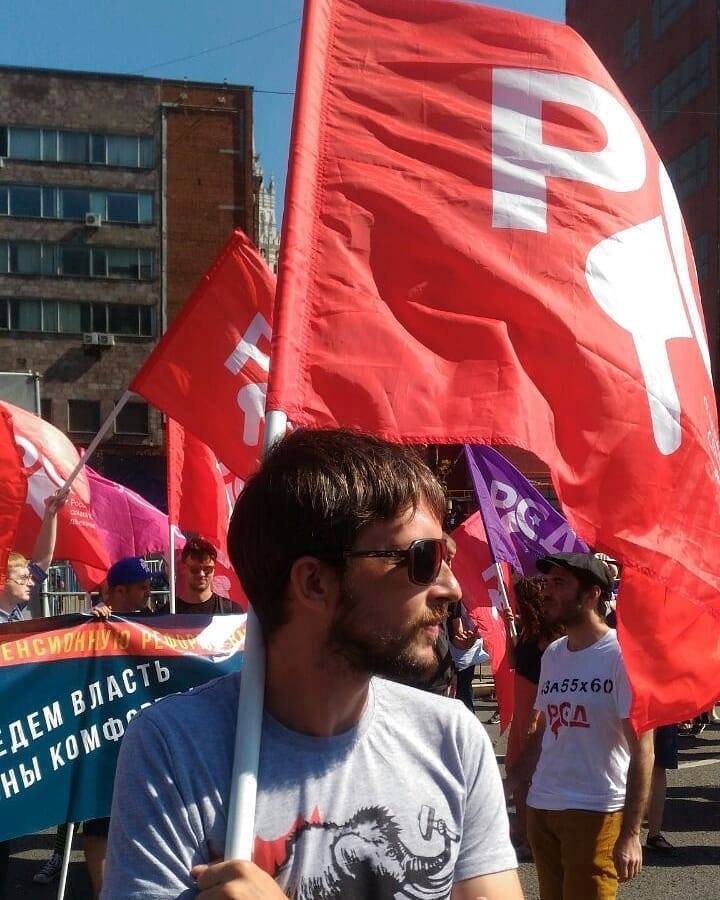 Konstantin Kharitonov is a historian and activist, member of Russian Socialist Movement

One Response to Russia’s Electoral Circus