Protests in Montenegro: ‘If this continues, the regime will stand on one side, the citizens on the other!’

From the editors: Early Saturday morning Montenegrin police brutally tore down a peaceful encampment that was set up in front of the National Assembly by a fraction of Montenegro’s opposition that had been calling for a new electoral law and fair elections for the past 20 days. In the evening, police deployed tear gas and rubber bullets against protesters and arrested several, including directly targeting journalists and MPs.

While till now many in Montenegro have held back supporting these protests – given the sometimes (though not exclusively) nationalist iconography and messaging – citizens groups and independent intellectuals are now mobilizing against the police crackdown. Police patrols have stepped up throughout the capital, while checkpoints have been erected on some roads leading to the capital.

The next few days will be critical in determining whether this protest will grow into a generalized revolt against Milo Djaknovic’s ruling Democratic Party of Socialists (DPS), which has been in power continuously since 1989.

Below is an English language translation of an open letter that was signed today by a multiethnic group of Montenegrin citizens and intellectuals condemning the police violence (Montenegrin-language original can be found here. And the growing list of signatories can be found here.) 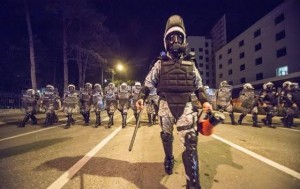 Riot police on the streets of Podgorcia. Photo credit: Anadolija

Open Letter to the Government of Montenegro, the Ministry of Internal Affairs, and the Police Directorate

We, the undersigned citizens of Montenegro, are protesting against the recent police repression that was aimed against the participants of peaceful citizen’s protest.

Yesterday in Podgorica, peaceful demonstrators were arrested – including professors, NGO activists, journalists, and citizens – while our fundamental rights as Montenegrin citizens were violated in a brutal, wild, and vulgar way.

Yesterday in Podgorica it wasn’t only our fellow citizens and their representatives who were arrested, but the constitutional order itself was attacked, thereby directly attacking our right to publicly express our discontent – essentially striking against the foundations of the state of Montenegro, its institutions, and its citizens.

A fundamental civic responsibility is resistance to such aggression, as an act of solidarity with all citizens and as a way of protecting our institutions from misuse.

The use of police force doesn’t simply strike against individuals, the laws, or our constitution, but it also strikes against individual representatives and our right to peaceful protest. With these actions the police has struck at the very character of Montenegro as a republican and free political community.

That is something that all of us have a duty to defend, regardless of our political or ideological preferences or our private and party interests.

Montenegro is a state based on a republican order, where the people’s representatives embody popular sovereignty.

The responsibility of the institutions that You represent is to protect the citizens, according to conscience and the law. If such postulates of a society do not exist, then we ask – why do institutions exist?

At the moment when a repressive state apparatus openly carries out aggression against its own citizens, all existing divisions – of nationality, political party, ideology, religion, gender, sexuality, generational – disappear! If things continue in this way, we believe that in Montenegro only citizens and a repressive regime will remain, and the heart of Montenegro will be defended – the citizen as the embodiment of sovereignty.

We as citizens are alerting You to this fact.

One Response to Protests in Montenegro: ‘If this continues, the regime will stand on one side, the citizens on the other!’