Note from the LeftEast editors: this article is re-published from the author’s  Word Press page.

“Never doubt that a small group of thoughtful, committed, citizens can change the world. Indeed, it is the only thing that ever has.” Margaret Mead

Three years ago, in 2012, Initiative for Democratic Socialism(IDS) didn’t actually exist. It was just a small group of some 20 citizens aiming to change the world. Three years later it is a parliamentarian political party with 6 MPs and 600 members. Last Saturday, on 4th of April, 2015, the party had its first regular congress (after having the founding congress in March, 2014). If IDS will manage to change the world is yet to be seen, undoubtedly it too will have to face and overcome great challenges embodied in the historically specific socio-economic form, i.e. parliamentarism and capitalism. Nonetheless IDS (member of the coalition United Left) has proven itself to be an important newcomer in the Slovenian political scene. In just 6 months since its foundation, the party participated on a series of three consequent elections- European, early Parliamentarian and Local. On all three it achieved a surprisingly positive result, the clear winner being the parliamentary elections and the crossing of the threshold.

Now 6 out of 90 MPs in Slovenian Parliament are advocates of policies aimed at combating the austerity measures, public cuts, privatisation etc. While pushing for the progressive legislation, such as equal rights for same-sex marriages, official recognition of the State of Palestine, workers cooperatives etc. The former, i.e. equal rights for same-sex marriages, was actually the first important legislative breakthrough. Slovenia thus joined the club of less than 20 countries in which heterosexual and homosexual relationships are legally completely equalised. One can imagine that Roman Catholic Church and conservative parties were quick to politicise this issue and are now waiting for the decision of the Constitutional Court if they will be permitted to organise a referendum or not.

The Party is also highly rated on opinion polls and has positioned itself firmly on the third place among all parliamentary parties, lagging behind only the ruling party and the biggest oppositional party. Generally speaking these are positive trends and there is undoubtedly still a large manoeuvre space for gaining additional support and increasing the membership ranks. However these are all things that one can read in the mainstream media and give a very one-sided picture of the organisation as such. As one of those who were active from the very beginning and still are (I am responsible for our international cooperation), I wish to, at least briefly, address some structural problems that the party has encountered and will have to face and resolve if it wishes to successfully further socialist policies. The first regular congress is an opportunity when one can and should reflect on such issues. IDS has, as I’ve tried to show in the very beginning, experienced an exponential growth, from a group of 20 enthusiasts it became a parliamentary party, that entered Slovenian National Assembly with more than 50.000, if one were to translate the current opinion polls these numbers would more than double.

An impressive growth indeed, but a double-edged sword as well. From the sphere of civil society and voluntary work, the party has now acquired the financial means to professionalize itself and employ a couple of people at the party headquarters as well as to support stuff for the MPs, i.e. parliamentary group as such. The fragmented working hours of our many volunteers have now transformed into a concentred effort of a smaller group of salaried professionals, though voluntary work still contributes a majority to the sum of all work devoted to the party. For each salaried professional there are still more than 10 volunteers, so the ratio is quite obvious in that regard. However it is not just the quantity of the work but equally and more importantly the content of the work, its, so to say, substance. Here professionalisation entails some structural transformations that, if not actively and rigorously reflected upon and fought against, will necessarily result in the same problems and defeats socialist projects have already experienced throughout the 20th century. 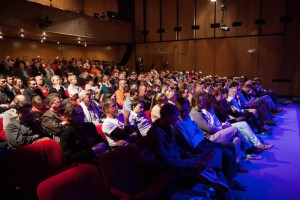 1st regular congress of the Initiative for Democratic Socialism, 4. 4. 2015.

There is a whole set of issues tied to professionalisation, they pose serious challenges from both, the theoretical as well as organisational dimension. I will not dwell upon the former, it is a complex matter that deserves to be analysed in a more detailed manner and there are still many things I would have to clarify to myself before doing that. Focusing on the latter, cluster of problems tied to the organisational form can be further broken down. Generally they are already well known, though no less pertinent for that matter, to illustrate our point let us address two issues:

a.) Logic of Media Industry:
Immense pressure to personalise the whole organisation (portraying its development and achievements(as well as defeats and short-comings)as an expression of the development of a self-made man); ironically contemporary parliamentary politics are here faithful heirs to the much despised cult of personality, of course the bottom line is that parliamentarism needs and demands a one man band, regardless of how many hundred or thousand members this band actually consists of, after-all abstract individuality pursuing its self-interest is the social relation imposed by capitalism, media industry is just making sure to emphasise that on every possible occasion

b.)Asymmetry among different party bodies:
Three degrees of professionalisation: complete (parliamentary group), partial (general secretary, regional expansion, communications office), voluntary (international cooperation, cooperation with civil society, trade unions, student organisations etc.). The dynamic and productivity of work of these bodies corresponds accordingly. In a broader timeline these discrepancies among various party bodies tend to become more and more visible, certain areas of work enjoy the experience, means, media attention etc. while others do not. All this not only determines the image and workflow of the organisation, but it also fundamentally determines the inner party relations. Some members, especially those who are completely or partially professionalised become more visible and well known among the party membership. They continuously and consistently strengthen their visibility and views, deepening the already pre-existing aspirations and expectations of the media industry and general public.

There are of course many more aspects that will yet need to be sufficiently addressed, but for the time being I propose the concept of “Parliamentary Immersion”. I believe it could be productively used to grasp the dynamic of social forces that are at work once a formerly civil society force enters parliament. Immersion in the sense of a flow, an in-depth dive and in the severe cases drowning, illustrates quite accurately the problem the anti-systemic (or at least aspiring to be) political force faces when it enters the very core of the system. Contrary to the socialist campaigns and struggles from 19th and the better part of 20th century, when fighting for “classical bourgeois liberties”, such as freedom of speech, freedom of aggregating around a common belief, freedom of press etc. etc. the challenges of the contemporary left are much more complex. It is not as if these “classical liberties” are in any way safeguarded and not under constant threat and bombardment of the bourgeois, on the contrary. If these were ever to be fully realised they would necessarily entail abolishing capitalism itself, they could not be achieved in any other way.

Leaving that aside, incumbent elites and power structures are not fighting against socialist forces with traditional repressive means only, although these (police first and foremost) are still plentiful, well and alive. No, capital and its representatives have learned to implement much more effective measures that the socialist alternative yet needs to address. That brings us again to the problem of “Parliamentary Immersion” and its dangerous dialectics- the more powerful a socialist political force become, the more intertwined with the system it becomes, both objectively in the sense of material interests of the organisation and its professional cadre, as well as subjectively. What is to be done?, slowly but firmly transform itself to What is possible to do?

These questions are not new, but the answers will have to be, otherwise we are all heading to the same and already seen defeats.