Peace-Fighters: Kirill Medvedev on the Need for a New Democratic Opposition

The need for a “third way,” one that is different from the rabid support for one of the sides in the Ukrainian crisis, a way about which several of have written in the last few months, is especially evident today, because it is the only chance to reconstitute the almost completely broken democratic opposition in Russia.

Maidan, the loudest and most relentless mobilization in post-Soviet space, was, without doubt, a chance for a unique democratic breakthrough, capable of serving as an example to Western Europe, the CIS countries, and many others.

Anti-Maidan, the tumult in South-East Ukraine, was, without doubt, a chance for a “circuit break,” an occasion to imagine the development of Western Europe outside of that course (of de-industrialization, privatization, neoliberalization) guaranteed to it by the heads of the European Union and the IMF.

It appears that both chances have been lost. Revolution is made by an active minority, but its fate depends on that minority’s ability to attract a majority to its cause, to convince it that there is a commonality of interests. Maidan proved unable to convey to the South-East, even before its victory, a clear message: we are one nation, we have common interests, there will be room in the new Ukraine for different cultural-historical traditions and economic-political orientations. Instead, there was, at best, confidence that the residents of the South-East will accept anything the revolutionaries will achieve in Kiev, at worst – the most abhorrent social racism and chauvinism, which in the end became the ideological basis for the anti-terrorist operation (ATO).

The republics that came into being in South-East Ukraine are, without doubt, the result of a foreign policy adventure on the part of the Russian regime, which, risking and wavering, tried to turn to its advantage the entirely justified discontent of a huge part of the population in the South-East with the new Kiev establishment and its politics.

Many on the Left (myself included) hoped that the people of Donbas (like those of Maidan) could formulate and realize their own social and democratic program: this could have either brought the two movements closer together, bringing to the fore the progressive elements of both; or it could have made the question of the territorial integrity of Ukraine (and Russia, and that of any other country in a similar situation) insignificant.

Besides problems of self-organization, of political initiative, which really do exist in South-East Ukraine (as they do in Russia and in many other places), it is also important that the aggrieved people of Donbas didn’t have any well-defined political goals from the start. Therefore, it is entirely logical that at the head of the mobilization appeared a small cadre of people, primarily from Russia, with either military or administrative experience, with some (let it be uncertain and unstable) support from Moscow and a very specific political motive – the restoration and expansion of “the Russian World.” Yes, the rudimentary Soviet anti-fascism and egalitarianism that reside in the majority of people of Donbas are not, to put it mildly, the worst of values now diffused in post-Soviet space. But it is impossible to seriously take as signs of left-wing or democratic politics government-implanted ideas about nationalization, the “anti-fascism” of right-wing historical re-enactors and former members of the RNU (Russian National Unity Party), their anti-Western, anti-European rhetoric, which plays on the unambiguously reactionary sentiments of the masses. And there is nothing left-wing about anti-oligarchic declarations as such, which can easily be part of a Right-Left, even a National-Socialist program. And there can be no comparison with either the Cuban or the Bolivarian revolutions as long as we refuse to speak of Russia as a local imperialist, dispatching its cadres to neighboring republics with the following ideas:

It is perfectly clear that the majority of residents of Donbas do not live in the fantasy-world of historical re-enactment, but in a world with their own everyday problems, problems of life and work, their own interests, which differ from the interests of the visiting fighters and commanders, no matter what hopes might have been placed on them in the beginning. And this is just as clear: even if a left-wing, radical-democratic agenda would suddenly begin to break through from the bottom, it would immediately be either appropriated or simply crushed, with support from Moscow, by the builders of the “Russian World.”

Therefore, the only chance to break the vicious circuit in Ukraine is for there to be radical changes in Russia. Changes that would come to pass not under the banner of a struggle for the “Russian World” against juvenile justice, Eurosodom and the like, but under the banner of radical democratic and social changes inside the country, a re-orientation of the economy from the maintenance of an army of bureaucrats, policemen, FSB-men, and heaps of big businessmen, to the social sphere, science, industry.

Of course, it is hard to imagine such changes taking place today. The events in Ukraine have, on the one hand, almost completely demoralized and divided the Russian opposition, divided its flanks from within (the Left flank most of all); on the other hand, they have presented a new problem for the regime: What is to be done with those sentiments that were persistently fired up by Russian propaganda, with the leaders and fighters of the South-East, who have gained authority in the context of the “anti-fascist” hysteria in the mass media? And it is obvious that there is nothing left to do but to co-opt, in some way and measure, their leaders and the sentiments that stand behind, to bring them to power.

Here we approach the subject of fascism. While the phrase “Kiev junta,” planted by the Russian propagandists, does nothing to help shed light on the situation, distinct elements of fascism are evident in post-Revolutionary Ukraine. These are, first of all, military forces financed by oligarchs, comprised of fighters motivated by ultra-nationalist ideas, recruited largely from far-right organizations. Attempts on the part of the regime (which may not itself be “fascist”) to support and make use of such structures all too often lead to the loss of control or to the surrender of it as the only means of survival. Historically, the intrigue of relations between bourgeois power and fascism consists precisely in this, which is why there is no point in calling the Poroshenko regime or the Putin regime in themselves “fascist” for the purpose of immediate propaganda gains.

In one way or another, the question of fascism in Ukraine must be discussed responsibly, including in the context of the pan-European situation with the far Right. We must discuss the relationship between the conduct of the pro-Kiev soldiers/fighters and ultra-nationalist ideology. But it must also be clear that racist hatred, torture, violence against peaceful residents are no less criminal if they take place under the Russian, Imperial or Soviet flag. And if we believe that a humanitarian catastrophe is taking place in South-East Ukraine, then we must demand the end of the anti-terrorist operation and the beginning of reconciliation under international control, not military support for our “brothers” coming from the right-wing, authoritarian Russian regime.

And, of course, we must discuss the question of fascism even more seriously in connection with Russia, for both the subsequent logic of events in the Donetsk People’s Republic and the example of, say, Ihor Kolomoyskyi, with his private battalions, give momentum to the formation of similar elements of classical fascism in our own country. It has been said more than once that, in the near term, regardless of how this whole Donbas story will end, we will likely see both the rise to power of several “heroes of the DPR” and the formation, from the ranks of militia returning to Russia, of some type of paramilitary structure under the patronage of patriotically inclined big businessmen and groups of the elite. Iconic DPR-men and their newly-recruited associates may very easily be employed in various political and economic conflicts and repressions, serve as examples of the regime’s “national-patriotic” character, be brought to the forefront in the event of crisis, and in the event of extreme danger – appointed to the highest posts.

Naturally, and in parallel to this, “anti-liberalism” will be strengthened, without, however, deviation from the general neoliberal economic course, but only in the guise of refining the figure of the liberal “national traitor” as a bogeyman for members of any kind of opposition. It appears that some on the Left are quite ready to lend a hand in this effort: some simply out of hatred for “liberals,” others wishing to find a small, but stable place for themselves in the new situation. They will be poured into the same anti-Western, “anti-liberal” sauce as the trash-conservative agenda. Let us look, for example, at the account of the “Yalta Conference of Resistance” on the site rabkor.ru:

“The struggle with the new Kiev regime is in effect a struggle against the EU, not in the form of challenging merely the politics of destroying the family and heterosexual relations, but in the form of challenging the entire anti-social neoliberal economic politics of the Western elites,” emphasized in his report the Head of the Centre for Economic Research (IGSO) Vasily Koltashov.

We need a program of radical change that is oriented toward the majority, a program that brings together democratic and social demands, a program that proceeds from the fact that the exchange of one group of businessmen for another, more “democratic” one, does not lead to anything good, a program that is oriented simultaneously toward de-centralization and toward the unity of the country, for the Ukrainian example has once again shown everyone what results from the dream of “cozy national governments” under historical and cultural conditions that are unsuitable for them.

We must orient ourselves toward trade unions, which every day fight for labor rights, without which no democratic changes are possible.

We must orient ourselves toward the intelligentsia and toward everyone who cannot and who does not want to “hit the road,” but who wants to work in their own country under normal conditions.

We must orient ourselves toward the youth, which sooner or later will begin to rebel against idiotic conservative interdictions.

Such people are fully capable of constituting a real majority in defiance of today’s – in fact, ephemeral – ideological “for Putin, for Stalin, for the Russian World.”

And we must demand judgment upon those who with singular cynicism manipulated the psyches of millions of TV watchers all these months, demand free access to central TV channels for different political forces (besides those that promulgate ethnic and religious division), social movements, and trade unions.

Our enemy is in the Kremlin! 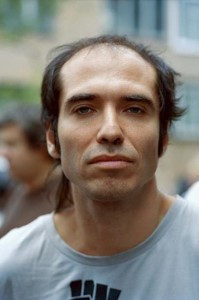 Kirill Мedvedev is a Moscow-based poet, translator, and activist. He is the founder of the Arkady Kots band. The text was published in Russian on OpenLeft and translated by Maksim Hanukai.

2 Responses to Peace-Fighters: Kirill Medvedev on the Need for a New Democratic Opposition