Spanish elections 2016: Has the Podemos-strategy run into it’s limitations?

1. Polls predicted that Unidos Podemos would finish ahead of the social democrats of PSOE, and that these two parties would muster a majority against the parties of the right. This did not happen, and Unidos Podemos in fact lost votes compared to the December 2015 results of the two parties that make up UP (Podemos and Izquierda Unida). Of course this is a huge disappointment for the activists and ordinary people who had invested so much hope and energy into kicking the hated casta out of power and ending the social emergency caused by years of high unemployment, austerity, mass evictions, etc. But as movement mayor Ada Colau said in Barcelona last night: It’s pretty impressive how far the electoral machines of change have gotten within their mere 2-3 years of existence.

2. Unidos Podemos have lost over a million votes since the December 2015 election. One important reason of this drop seems to be a high rate of abstention among UPs voters, while a smaller number of voters might have migrated back to the relative security of PSOE. The general drop in electoral participation of 3.4% can have many reasons for the general drop: Election fatigue, droning debates, while the general move to the right might be explained by risk-aversion and fear, especially in the wale of Brexit and right-wing fear-mongering about Greece and Podemos wanting “another Venezuela” (generally represented as a horrible dictatorship by Spanish media).
But as Emmanuel Rodriguez López has pointed out, on the one hand, it is highly likely that he *specific* and *higher* drop in the UP vote has to do with UP being seen more as a normal electoral party from the left – eager to make a coalition with the social democrats – rather than the anti-systemic force it emerged as on the back of the 15M movement (what outside of the Spanish state is known as the “indignados”). On the other hand, some might have abstained or preferred the PSOE’s “moderation” (almost certainly a small number) because the social crisis appears less urgent than it has in the past. Finally, some Izquierda Unida voters might have stayed home, skeptical of their dominant ally’s populism and support for a Catalan independence referendum.

3. After a long run of increasingly successful elections, the electoral cycle has ended, and the Podemos-strategy has run into it’s limitations. Over the last year there has been 3-4 elections in Spain depending on the region you look at. Much energy has been focalized around these elections, and less energy has gone into building and maintaining the movements in the streets, neighborhoods and workplaces. It has been a year of hope, but hope can also be demobilizing. In fact it’s expressed by the Spanish verb for hope: esperar also means waiting, expecting. Podemos have encouraged this development by staking all most all on building an “electoral machine”. First by undermining its local base (the circulos), then by neglecting building new forms of participation and organisational depth. [Added: Also Unidos Podemos haven’t gone nearly as far as municipal citizens platform Barcelona en Comú in creating a new political culture, what many hear call “the feminization of politics”. This enables broader participation, more sustainable organizing, and reveals and denaturalises the arrogant machismo of mainstream politics]. 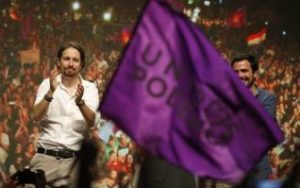 4. With less strong social movements and street level production of common sense and anger, the mass media have played bigger role. It is telling that speeches of left leaders such as Pablo Iglesias and Ada Colau have often told people not to forget about what happened in the early years of the crisis, the austerity, the repression, the evictions, the resistance, the mass movements. In other word, a past-tense has entered the discourse, and it’s urgencies have been focused on the need to win the elections. Relative to most other European countries the movements are still strong, but it is my sense that their ability to set the agenda vis-a-vis the mass media has declined. Thus discourses about the violence of the crisis and the truth of the struggles against it have increasingly circulated as elements in an electoral discourse. Rather than common sense coming from ordinary people it has been the discourse of aspiring left politicians, to put it perhaps too bluntly. The lesson I think can be drawn from this is: When the mass media are militantly against change, any radical electoral politics needs high activity of social networks online and offline in the production of truth.

5. The fall in mobilizations and anger over the last year is not due just to an understandable focus on elections (given the analysis that movements were blocked from making change without a “assault on the institutions”), but also to relative if artificial economic stabilization. There has been moderate growth, and unemployment has fallen, even if new jobs are overwhelmingly low-paid and precarious. All this would have been unlikely if the EU hadn’t allowed the conservative PP-government to postpone billions of euros in austerity in order to curb the growth of Podemos. This result is a huge victory for this strategy.

6. By “loosing”, Unidos Podemos has avoided playing a very difficult hand. If they had surpassed the PSOE and formed a government with them, they would have had to choose between implementing austerity or fighting the EU. Within such a fight the PSOE would have been a worse friend than the enemies on the right. And I’m not sure Podemos have a strong strategy to face off the EU; much seems to hinge on the fact that the Spanish economy is much larger than Greece’s. However, it’s useful to remember that even France committed socialist Mitterand-government was disciplined by financial markets and European institutions weaker than today.
Even if Unidos Podemos came third they now remain the sole credible anti-austerity party, as the PSOE will probably hand power to a right-wing minority government of PP and C’s in the name of “stability”. Now the big question is how toxic legacy of postponed cuts will be handled and resisted – and how the rebel cities (Madrid, Barcelona, Zaragoza, Valencia, etc)- will fight them and encourage local movements.

7. The political effects of this will be ambivalent and contingent upon the activity of existing movements. Hope has been exhausted, but the question is whether this means cynicism and defeatism, or that people stop waiting/hoping, whether actively or passively, for parties to make change happen. Thus popular mobilisations and movements could be restarted and reinvigorated, perhaps increasing support for Unidos Podemos in turn. This might prove difficult, but it’s worth remembering that forming a necessarily split left government with the PSOE would have entailed many of the same risks of cynicism, and opened less space for popular mobilization. 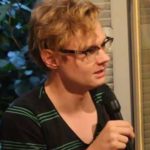 Bue Rübner Hansen is a post-doctoral research fellow at the University of Aarhus and an editor of Viewpoint Magazine. Currently based in Barcelona, he is conducting research on the relationship between crisis, social movements and political change with a focus on Spain.