On the Fire that Sparked an Uprising 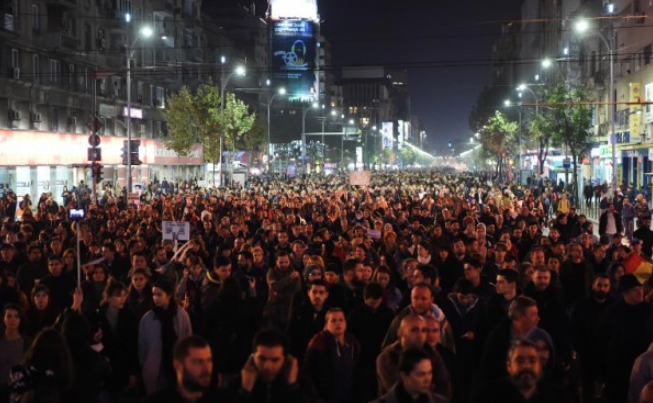 On October 31st during a rock concert in the underground club Colective in Bucharest a fire broke out, killing 27 and injuring another 200. Almost a fortnight after the total number of casualties reached 54, with many more still in critical condition in hospital.

This was the biggest tragedy in the recent history of Bucharest and its social effects will still be felt in the foreseeable future. In the short run, this dramatic accident sparked a series of processes that are still underway and whose significance is still uncertain. In this text, I will try to highlight some of the social forces and processes that this tragedy simultaneously brought to light and managed subsequently to obscure, especially by the way it was integrated into a certain symbolic and discursive universe.

While the real dimensions of the tragedy were still not fully known, the Romanian President went public and offered what became the main framework for explaining the tragedy: corruption kills. Since the site where the concert was held lacked any proper amenities or authorizations for such events while the authorities looked the other way, the corruption of the local administration and of the political class in general were conveniently blamed for the deaths. Such an immediate explanation for the tragedy resonated with what is already the main popular framework in Romania: things go wrong because of corruption, especially the corruption of the political class as a whole. This tragedy was just the ultimate example.

After a day of mourning and silent marches across the country in the memory of the victims, the people took to the streets on Monday November 2 in huge numbers and demanded the resignation of the Prime Minister, Victor Ponta. Surely, there was no direct connection between him and the tragedy, but Ponta has been framed for long as the embodiment of all that is wrong with the political class, especially its corruption. Accused of plagiarism, Ponta was also recently indicted and is awaiting trail for corruption and abuse of power. In fact, his days were numbered ever since he lost the Presidential elections almost a year ago. Then he was defeated precisely by the anti-corruption rhetoric and by a candidate who seemed to come from outside, or at least from the margins of the current political establishment. This tragedy became then the perfect moment to finally get rid of the prime minister, a fact calculated by the President who offered corruption as the immediate explanation for the tragedy.

Therefore, what seemed to be a genuine sudden outburst of anger following the tragedy was right from the beginning directed towards very concrete political goals at play in the prolonged struggle that has been taking place in Romania in the past 12 months. Prior to this tragedy, the vice Prime Minister Gabriel Oprea was already under heavy street pressure to offer his resignation after a policeman in his escort died in an accident provoked by the breaking of a legal. Oprea and his parliamentary fraction were the only reasons Prime Minister Ponta was still in power. The nightmare of Colective swapped both of them aside and paved a way for appointing a new prime minister by the President.

While this framing of the tragedy as an outcome of corruption was indeed very powerful and continued to inform most of the subsequent demands of the protests in the following days, the exact details emerging after the accident opened up alternative interpretations and a new set of different questions. Such details could not simply be subsumed under the anti-corruption narrative.

For example, it turned out that the there were not enough local fire safety inspectors following the cuts in the public administration during the austerity measures imposed after the financial crisis. Moreover, the legal provisions were very much relaxed in the past years in favor of business owners. The official policy of the local administration to transform the center of Bucharest in a place of consumption and fun enabled entrepreneurs to open up places with little official oversight and minimal investment in infrastructure. Deregulation, not corruption emerged as the main culprit.

Furthermore, details about the people killed in the accident complicated the picture even more. One of the victims was the cleaning lady of the club. Maria Ion was the homeless single mother of five who had been waiting for years in vain to get social housing from the Mayor house. Her family got it after her death during a TV show in which what was supposed to be a social right became an act of charity. The club employed her illegally, without proper documents, regular payment or social insurance. So were the bartender and the bodyguard working there, both of them in mid-20s and now dead.

The number of the injured soon put an immense strain on the city’s hospitals. They had difficulties coping with the influx of badly injured people and doctors and nurses had to be brought from homes and work long shifts in order to deal with the situation. It became obviously clear that hospitals in Bucharest are understaffed and quite unprepared to deal with catastrophes of such scales. The special clinic for cases of severe burning was not functional at the time of the tragedy. This of course should not come as a surprise given the number of doctors who left the country and the ridiculous salaries paid to those who stayed. The system has been under-financed for 25 years and the main idea of reform is just privatization. As many people have observed, it is better not even to think what would have happened if such a tragedy had occurred in a small provincial city in the country.

In this context, relatives of patients asked for them to be treated abroad. This might have been an emotional reaction in some cases, and an impossible demand given the state of the patients, but it nonetheless reflected the popular belief that the local medical system cannot be trusted. In the past, the president, the prime minister and many other notable officials chose to seek medical treatment abroad in a sign of no confidence in the local system.

It also emerged that many of the injured ones, a vast majority of them young students and professionals, do not even have basic medical insurance, reflecting a wider trend among the unemployed and underemployed Romanian youth living in conditions of basic precarity and vulnerability that usually remains hidden.

In the aftermath of the tragedy, and following well-known knee-jerk reactions in such cases, a series of controls and official declarations painted an even grim picture. It turned out for example that over 90% of schools in Romania do not meet fire regulations. Even by the current legislation, lax at it is, they should be closed. Also, about 200 buildings in Bucharest, including popular cinemas, clubs, restaurants and shops, are in such an advanced state of dilapidation that they should be immediately closed. They are still functional. In addition, tens of blocks of flats in Bucharest and dozens of other buildings are in danger of collapsing in case of an earthquake. The exact number is not even known.

While it is politically productive and intellectually convenient to blame the death of people in Colective on corruption, the sobering truth is that they are victims of the current state of deep underdevelopment of the Romanian society. Corruption cannot be dismissed tout court, but it is not a cause. It is also an effect of the same mechanisms that contributed to the current situation. Deregulation, the neoliberal policies of reducing the state to the bare minimum and of privatizing public goods, the flexibilization of the labor code and the dismantling of any collective bargaining rights, the assault against social services and the demonization of the “welfare profiteers”, market fundamentalism and the fetishism of individualism, profit and success – in short the consensus of the transition yeas made inevitable the tragedy in Colective.

In such cases, emotions run high and comparisons fly like shrapnel. But the sheer scale of the tragedy in Colective should not blind us to the fact that this was not an isolated case, even though the collective number of victims is staggering. Just a few days after the tragedy in Bucharest a bread factory in Brasov caught fire. A worker was killed and others were badly injured. It turned out that many workers were trapped inside because they could not open the doors with their magnetic cards once the electricity went out. For the majority of the people, working and living conditions in Romania render them not only vulnerable and precarious but also almost entirely disposable in the process of accumulation and profit.

In this context, there is a deep ironic paradox in the decision of the protesters to ask for the resignation of the prime minister. As a politician, Ponta was unwilling and unable to break with the neoliberal consensus and his main policies (the fiscal code, etc.) were geared towards the benefit of business owners and global capital. Such a conduct is completely unsurprising from a social democrat nowadays everywhere in Europe. But Ponta was able to break with the austerity measures of the former conservative government and to offer some modicum reprieve to labor and state employees. He was also bent towards a more liberal Keynesian measures including more state regulation.

By pushing for his resignation the protesters decrying the events in Colective just paved the way for the proponents of neoliberalism and austerity—the main culprits of the tragedy—to come back to power in the next elections.

* This article originally appeared in Croatian on the Bilten website.

One Response to On the Fire that Sparked an Uprising