On nurses, strikes, and public sociology 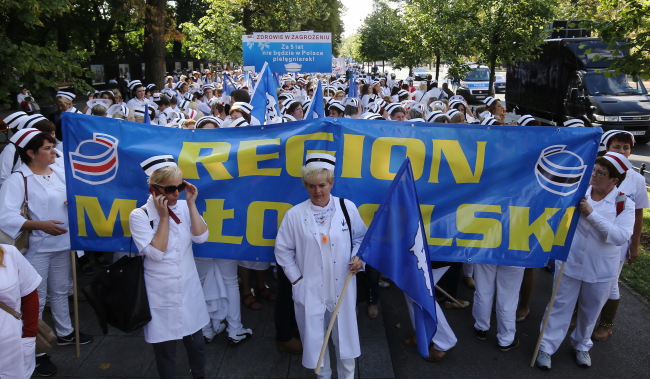 This article originally appeared on ChangingEmployment.eu by Julia Kubisa on June 08 2016.

On 24th May 2016 nurses who work at the Child Health Centre, the major paediatric centre for serious illnesses in Poland, started a strike action. It means that they stopped providing care for their patients – nevertheless the care was provided by head nurses, doctors and also the striking nurses themselves, who come on call in case of emergency.

The health care system in Poland is decentralised therefore it is only the CEO of the hospital who is entitled to negotiate with the striking groups. The collective dispute was open since late 2014 and nurses wrote lots of documents and letters to the management asking for more social dialogue. Facing silence and rejection, they finally organised a strike. Their basic demands were pay rises and increase of staffing at the wards. They underlined that they are completely exhausted with work conditions such as one nurse per 20 child patients, and with low pay that results in constant overtime.

Their strike demands sum up the most crucial problems of nurses in Poland. There are fewer and fewer nurses in Poland, with the proportion of approx. 5 nurses per 1000 citizens – with Czech Republic: 8,4 nurse, France 9.3, or Germany: 11.45. It is a very fast ageing occupational group, with average age of 47 years old. What is interesting, the faculties of nursing at medical universities in Poland are quite populated but.. most of the students attend intense courses of Norwegian. Polish wages, lower than average wage (which is low anyways, especially regarding living costs in big cities) and increasing work intensity are not attractive for young graduates of nursing studies.

Those nurses, who still work at health care sector in Poland, regularly take overtime or extra jobs in other health sector units. Some of them are not even employed anymore – they are self-employed and provide ‘services’ as subcontractors. That means that there are not working time regulations restricting the number of working hours. In reality that translates into 300 hours of work per month.

However this kind of knowledge was not that much widespread. When I published my PhD book ‘White caps strike. The analysis of trade union activity of nurses and midwives’, just before joining ChangingEmployment project, I gave couple of interviews to press and radio but I always had the impression that this topic is qualified as ‘specialist’ and not much appealing to general public. Nevertheless, nurses were reading the book from the day it was published.

Nurses and midwives organised one of the most militant trade unions in Poland – in comparison to other TU they rely much on mobilisation. For last 20 years they organised demonstrations, street blockades, occupying of public administration buildings (ministry of health, ministry of labour, Prime Minister Office, guest gallery in Parliament), camp villages outside public administration buildings, and strikes in hospitals, sometimes strengthened by hunger strikes.

The decision of strike is always presented as dramatic or even controversial because they have to overcome the ‘traditional vocation’ ethic that bonds them to the patients regardless the working conditions and wages. The care provided by nurses in Poland is still regarded as some kind of private, emotional service, a woman obligation that should be performed in a humble, servant way. The nurses are often called ‘sisters’, which strengthens this notion of emotional and even intimate type of relation between nurse and patient. From this perspective there is no space for strike because as a woman you hardly can ‘strike’ against your ‘family’.

Therefore nurses and midwives organise strikes to claim their professional role – to point out that they deserve decent wages and good jobs just like anyone else. Or perhaps even more, because their job quality is linked to the quality of care provided to patients. These are my findings of the research I did for PhD thesis and then the book.

When the strike at Child Health Centre started, I was shocked by the first media coverage. The news were focusing solely on the ‘threat to our little patients’ and imposing selfishness of nurses.

I wrote a short comment of my FB wall, explaining that wages are crucial but it is just part of the problem – it is the understaffing on the wards that poses a constant threat to the patients, not the strike. I also explained the way the strike is organised and that the patients still receive care. The comment was shared almost 700 times within 3 days, and viewed by almost 7000 people. It was published on different websites – the sociopolitical, the feminist, and the medical portals.

Then I wrote a more extended version of the text, adding an ‘instruction for media – how to inform about nurses’ strike’ and indicating that instead of moral panic and questions about amount of money that would be satisfying for nurses, they should rather ask about the nurse ratio, the number of working hours, the number of subcontractors in the hospital, the extent of overtime per nurse and why the management did not solve collective dispute in the social dialogue? This also gained popularity that none of my previous columns on nurses, trade unions, feminism or other social issues gained.

Since then I am regularly giving interviews, commenting, engaging in Twitter and Facebook disputes, and posting lots of information about nurses’ working conditions and wages with the hashtag #SupportPolishNurses. My publisher decided about third print of the book because the first two were already sold. What is worth noticing here is that the prices of scientific books in Poland are relatively low, especially in comparison to the international publications. So, it makes my book more readable and available for general public.

My point here is that this is how I understand the approach of public sociology. I think the role of sociologist/ researcher does not stop with writing an article or book based on the fieldwork. It should be focused on dissemination of scientific knowledge using different channels of communication and using the privileged position of scientist to give the voice to the ones that are usually muffled and not heard in the public discourse. It is a reciprocal process where I can refer to the scientific knowledge and strengthen the position and arguments of the group that I investigated. They can use the materials I produced to support their agenda. It may be time and energy consuming, but I guess it is for the good cause.