New hope for the Balkans, New Formations on the Left 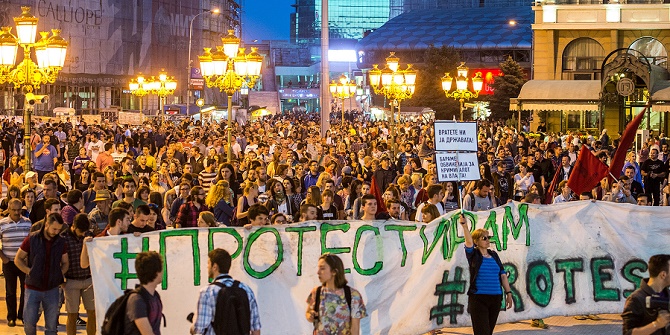 This is the text of a speech by Pavle Ilić – a sociology student at the University of Belgrade, a member of Marks21 in Serbia, and a contributor to LeftEast – that was delivered at the Marx is Muss conference in Berlin earlier this year. Pavle was on the panel entitled New Hope on the Balkan Left, which took place on Saturday, 7 May 2016. We re-publish the speech kindly produced by Pavle as a contribution to discussions on how to build the left in the region.

Dear comrades, I would like to begin my talk by thanking the organizers of Marx Is Muss 2016 for inviting me to speak at this event. I would also like to express my deepest feelings of solidarity with the thousands of Macedonians – comrades on the left, as well as ordinary people – who are currently engaged in a struggle against their corrupt government. Macedonian people have taken to the streets over the last several weeks outraged by their president’s decision to officially pardon several high ranking politicians involved in a wiretapping scandal.

Their struggle marks not only the second wave of social movement mobilization in two years in Macedonia, which was not based on ethnic cleavages – it is important to note that at least a quarter of its two million inhabitants are Albanian by ethnicity and that most reports indicate that Albanians and Macedonians are marching side by side this year, as they were in 2014 during the nationwide student movement – but it is also an unmistakable sign that the people of Macedonia have decided to raise their voices in anger against a scourge that has been plaguing the Balkans almost permanently for ages. A scourge which, albeit less visibly, is gaining strength throughout the entire world – I am talking, of course, about the curse of an irresponsible and a cynically tyrannical government, oriented exclusively towards fulfilling the interests of capital and devoted maniacally to diminishing, perverting, and annihilating any vestiges of peoples’ power and democracy (in its Marxist sense) that the numerous and geographically and historically colourful class battles of the past have bestowed upon the working people(s) of the world.

Needless to say, this type of government is the almost uniform political expression of neoliberal capitalism at the beginning of the 21st century – and this is exactly the reason I chose to begin a talk about new hope in the Balkans by paying tribute to a struggle that one of its many peoples is fighting, aimed at the political culture and the dehumanizing reality of capitalism.

Let’s turn now to the other part of the title of this panel – “The Formation of the Left.” What this title relays, or, at least, what it should relay, is a sentiment of a void where a ‘left’ should be in the political life of a society (or societies), which would be difficult for any western Marxist to comprehend. I am not referring simply to an absence of left rhetoric or programs from the public sphere, lest I offend the cognitive abilities and sneer at the experiences of any comrades who lived through Fukuyama’s End of History. No, I am talking about a discontinuity on the left so typical of (and in more than one way created by) the countries which spent the second half of the 20th century under bureaucratic state capitalist rule – or ‘real socialist’ if we want to ponder to vehement anticommunist jargon. Only, this discontinuity has seldom been as absolute as it has been in the Balkans, with Serbia, the county of my origin, and the locus of struggle of my organization, Marks21, flaunting a gaping maw on the left of spectacular proportions.

Presenting a full and detailed analysis of all the factors which contributed to such a total defeat of the left in the Balkans would far surpass the time allotted to me in this panel, but I would be happy to clarify any points about it I might skim over in my introduction during or after the discussion. Suffice it to say that the left in the Balkans (with Greece being a big exception to this rule) has been overwhelmingly burdened by a legacy of Stalinism which had produced fratricidal wars, opened up the doors to IMF disciplinarianism (by pushing through one of the earlier waves of what is today known as austerity measures), sacrificing national sovereignty to Russian diktat, and curbed the rule of the people made possible (though only potentially) by a victorious revolution, at least in Yugoslavia and Albania, after WWII.

This was, and to a great extent still is, the situation facing everyone in the Balkans considering devoting (a portion) of their lives to the struggle for socialism. The political cultures of our societies have been nullified, and the creation of a “new, Marxist, anti-capitalist left” had to, basically, start from scratch. In many ways, the Balkan left is thus often deprived of the invaluable influence of established cadres, practical skills, and necessary attitudes – subtlety and tactfulness, revolutionary modesty, and a nuanced approach to theory and, especially, practice.

However, the advent of the capitalist crisis in 2008 has shook up and destabilized all of the Balkan statelets. The ideology of integration into the EU, of modernization through privatization, and of the utopia of free market capitalism seemed to go up in smoke. Social movements started gaining in strength, frequency and numbers across the region – and from those social movements emerged, grew, and developed small, independent left-wing initiatives.

If we are to talk about the class makeup of these initiatives, the dominance of young, urban, humanist intelligentsia becomes obvious. The centres of left-wing activity reemerged mainly around the philosophy and sociology departments of various universities in the region. Lately, these young people have been tackling the task of infusing existing working class resistance struggles (as no offensive ones exist) with various levels of success – from actually forming a broad left wing party which is nominally anti-capitalist and which has succeeded in entering parliament in Slovenia, to actually dissolving the weak and non numerous theoretical organizations within popular assemblies which arose in the Federation of Bosnia and Herzegovina during the Bosnian spring movement in 2014 without significantly influencing its political direction.

It could be said that several factors have proven to be of notable significance for a breakthrough of the left in the Balkans, although it is worth noting that a unified theory of the reemergence of the left would be an impossible one to formulate at this time. Those factors can be listed as: a) activist and/or theoretical groups of individuals creating proto-political organizations that are forming the basis for cadre and experience building; b) social movements generalized on a national level in which it was possible for left-wing initiatives to intervene; and c) the presence of left-wing, or pro left-wing NGOs – in the Balkans, most notably those funded by Rosa Luxemburg Stiftung.

At this time, it is important to stress that the last of these factors has provided the emerging Balkan left with many opportunities, not the least of which was local employment for young, highly educated professionals who otherwise might have been forced out of politics or out of their home countries altogether. Unfortunately, those opportunities were accompanied, and sometimes completely overshadowed by certain severe limitations. Summarizing the arguments raised by Vladimir Unkovski-Korica, a member of the Serbian Marks21, in a text about the future of the left in Southeastern Europe, those limitations stem from the fact that any NGO has to account for its resources and its activities to an external and often hierarchically superior donor. They can be listed as:

Without entering into too much detail, it is necessary to say that the strategy of funding NGOs as key actors in rebuilding the Balkan left has proven to be detrimental to the task it had set before itself. The Slovenian party, the flagship of this project has, only a few weeks ago, imploded into infighting that threatens its survival on the political scene. The fortunes of other similar yet smaller projects have either ended similarly or show signs of strain produced by internal contradictions, which will force them to change track or risk going down the same path.

Despite such a dark account of the problems besieging this renaissance of the Balkan left, important landmarks of brighter times to come have lately been popping up regularly across the region – leftish political initiatives trying to ride the bandwagon of Syriza, Podemos, Corbyn, Sanders or any other en vogue political formation / movement of the left; public statements by trade union officials about the need for an independent workers’ party; local workers’ initiatives occasionally going so far as to advocate the “return” to a workers’ state, etc. A workers’ party and a strong social movement uniting various struggles in the Balkans must be our short-to-mid-term goals. Goals which we will make a reality only through intervening into those struggles and drawing their most battle hardened and able veterans and enthusiasts into our own ranks.

The tragic fate of Yugoslavia has introduced the term “balkanization” into the vocabulary of politics and social science. This term references the processes of division and rupture which were set in motion in the late 1980s, and which resulted in the current existence of seven states where there was only one for the most of the XXth century, no more than two of which can claim to be geographically, politically or socially stable (compared to Western nation states). It is a duty of left wing forces in each of these states, as well as in those which were not a part of Yugoslavia, but which are ravaged with the majority of problems desolating the post-Yugoslav societies, to work in unison to create a process of anti-balkanization, a process of internationalist cooperation, solidarity and unification with the goal of pooling the collective strength of the dozens of millions of people living in the wider Balkans area into a federation that could defend their interest and their potential self-government from the interference of the great imperialist powers – be they NATO, the EU, or Russia – which have for ages conducted ‘divide and conquer’ strategies in this part of the world (as in so many others).

In order to end my talk with something more than a slogan that should be exclaimed before the people of the Balkans rather than in front of mostly German revolutionary socialists, I must add that a large role in making this dream a reality, and a stepping stone towards a world free of division across borders of not only national, but also the future socialist states, will be played by western revolutionaries whose importance in fighting and defeating western imperialism cannot be overstated!