Macedonia’s Grassroots Resistance to Mining: A Struggle for the South-Eastern Region’s Survival

Editors’ note: this text has been published in cooperation with Bilten.org, where it first appeared on 28.02.2018.

“For fifteen years now my family and I have been investing in organic agriculture, working the land together with my children to build a better life for them in our homeland,” says Dimche Baleski, an organic producer from the municipality of Valandovo, during a public debate on proposed amendments to the Law on Minerals held at the Macedonian Parliament on 1 February 2018. He continues: “And now, without any consultation with us, the affected community, you set up a ticking bomb in our yards – an open-pit copper, silver, and gold mine that threatens our sources of income, our health, and our livelihoods. You come in, unwanted, and want to kick us out from our home – you have even ‘planned’ our ‘relocation’ in your own EIA study!” He is referring to the Kazandol mine and is citing excerpts from the investor’s Environmental Impact Assessment (EIA) study, as he addresses Sardich MC (the primary investor in the mine), the government, parliamentary deputies, and the Macedonian public through broadcast media.

Baleski was not alone at the debate, but was joined by representatives from local municipal initiatives in the Macedonian southeast that have been actively resisting the extractive mining projects in the region for the past eighteen months. During this period, grassroot initiatives in Valandovo, Gevgelija, Strumica and Dojran have organized community gatherings, panel discussions and referendums in their municipalities in order to raise awareness about the looming threat of the mine and to make their voices heard. Referendums were held in 6 municipalities, with over 40,000 votes cast (representing 98% of voters who turned up) against mining projects in the affected municipalities.

This comes as no surprise, since Macedonia is a country where about a fourth of the population’s livelihood comes from agriculture – an industry contributing 17% of its Gross National Product (GNP). This is in contrast to the mining sector, which currently only employs 2.500 workers (in heavy metals) and contributes only 1.5% to the GNP. In addition, agriculture is estimated to account for €237-million in Gross Value Added (GVA), with about 30% of all agricultural produce consumed in Macedonia originating from the southeast.

These municipal anti-mining initiatives are united by a shared vision for the region: with about 300 sunny days per year, the Macedonian southeast is a perfect setting to pursue a model of sustainable development that is based on agriculture, eco-tourism, and renewable energy production. This vision will be impossible to realize if the 86 toxic and destructive mining concessions imposed by the former right-wing VMRO-DPMNE government are allowed to proceed. 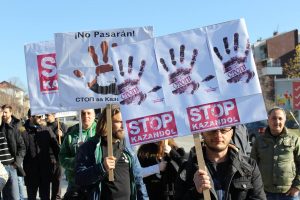 Macedonia’s current social-democratic prime minister Zoran Zaev made big promises to the region’s inhabitants during the local elections in the fall of 2017, none of which seem to matter anymore. Zaev’s change of heart reminds us an awful lot of Greek prime minister Alexis Tsipras’ broken pre-election promise to halt the destruction of the Skouries Forest and local livelihoods by Canadian-based Eldorado Gold’s mining activities.

While the financial capital for the Ilovica-Shtuka gold mine, also planned in Macedonia’s southeast (the second of 86 concessions signed by the former government), is under the auspices of Canadian Euromaxx Resources with support from the European Bank for Reconstruction and Development (EBRD), research shows that the Kazandol mine is tied to the domestic capital of ex-officials with close links to VMRO-DPMNE’s former leader.

So far the new SDSM government has done little to distinguish itself from its predecessor, doing little visibly to halt the terrible consequences of mining, in spite of numerous indications from a legal standpoint that a moratorium on these projects should be granted.

After several calls holding the current prime minister and his government to account for their pre-election promises and the exhibited outrage of locals at the government’s inaction, a task force on fulfilling the demands of people in the southeast was created. This working group included the ministers and deputy ministers of ministries involved in approving concessions and licences for investors, members of parliament, members of the prime minister’s cabinet, representatives from relevant inspectorates, and representatives of the municipal initiatives. It convened only once, in December 2017, without delivering any results.

Renowned lawyers argue that there are strong legal grounds for the government to impose a moratorium on the Kazandol mine, especially after investigations by BIRN revealed multiple inconsistencies and serious indications of illegal activity in fast-tracking the Kazandol concession. Based on this, the grassroot initiatives from the southeast announced filing charges against the investor in December 2017, and it was only on 6th of March 2018 that BIRN confirmed that the Macedonian Public Prosecutor’s Office for prosecuting organized crime and corruption opened a pre-trial procedure requiring additional evidence on the manner in which the concession for copper mining at the Kazandol mine was issued.

This adds to what the Macedonian public already knows about the breaches of contract made by Sardich MC, when it failed to build a cathode copper plant with the capacity to process at least 50% of the exploited ore within two years of signing its contract (on February 27th, 2015). SOS Valandovo’s drone footage from December 2017 attests to this, as well as the investor’s detailed visual announcement in January 2018 about progress in building this very plant.

What one would expect from the precariously formed social-democratic government to do in these trying times is to at least attempt to set the stories of the relevant inspectorates straight; two public institutions, the Inspectorate of the Environment and the Technical Inspectorate, have delivered contradictory reports on the construction of the production plant for the Kazandol mine. Nevertheless, all institutions that are legally required to condemn this breach remain silent and blind to these revelations.

An unexpected ally of the Macedonian southeast in the struggle against the mines is President Gjorge Ivanov, conveniently forgetting his enthusiastic support for investment in these mines in 2014. In his address at the end of 2017, the president declared himself a supporter of the resistance: “Southeastern Macedonia is on its feet, my fellow citizens from my hometown are demanding a stop to the construction of the Kazandol mine, Ilovica, Borov Dol…They are calling for their basic human right to a healthy environment.” 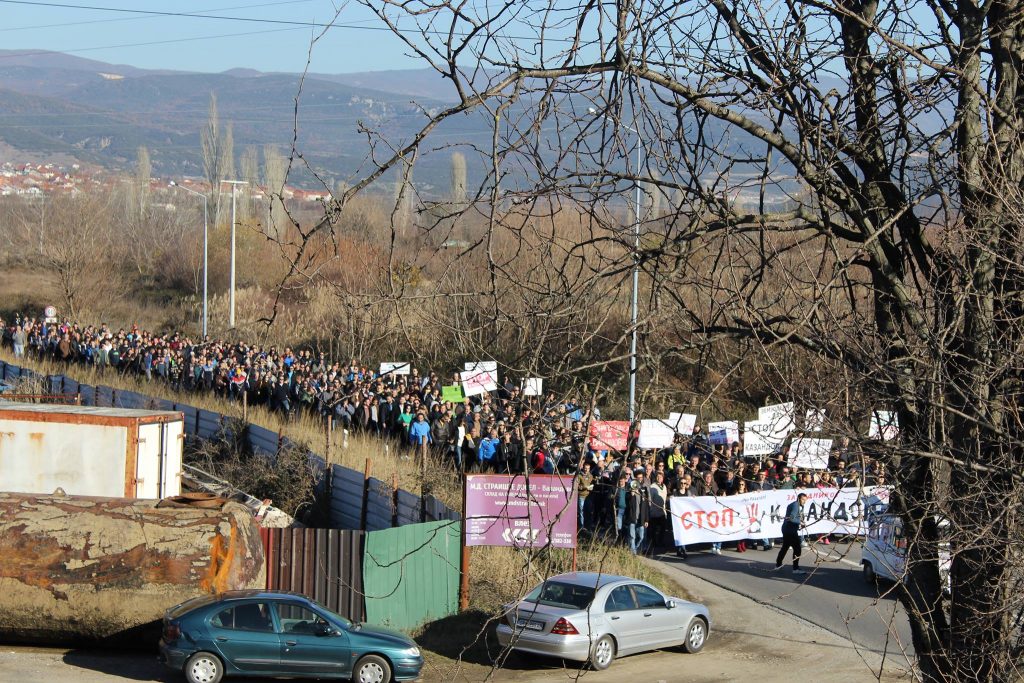 Amendments on the Law on Mineral Resources

Back to Baleski’s address in Parliament, the only institutionalized step in the right direction so far might be considered the recently proposed amendments to the Law on Minerals. The fast-tracked amendments made in 2012 to this law by the previous VMRO-DPMNE government made it easier for investors – such as Sardich MC (for the Kazandol mine) and Euromaxx Resources (for the Ilovica-Shtuka mine) – to translate their exploration concessions into extraction concessions for copper, gold, and silver with leaching, and the intensive use of sulphuric acid and cyanide. Initially proposed by two MPs from DOM (the green party that is a member of the new ruling coalition), and supported by another 9 social-democratic MPs, the seven proposed amendments would overwrite the previous changes made that favored investors. If they pass and enter into force, the use of sulphuric acid and cyanide will be banned from mining operations in Macedonia.

Although local initiatives are generally supportive of the amendments, they call for additional ones to make it compulsory for the government to hold referendums that would allow local populations to decide if they want such investment projects to proceed.

They also cautioned against constantly being placed on the same platform as the mining companies and left to debate each other, while key state institutions are caving in. On the same day as the February Parliamentary hearing, Sardich MC submitted a request to obtain the last remaining A1 integrated ecological permit from the Ministry of Environment and Physical Planning, which would legally enable them to begin extracting and processing ore. In the wake of this, the local initiatives published a call for support hoping to bureaucratically stall the granting of the A1 permission to the investor.

The most recent proposed amendments to the Law on Minerals are expected to be discussed again in Parliament during the coming week, but the chances of them passing are very slim since the Ministry of the Economy is urging they be dropped, arguing that if passed: “foreign investors would be discouraged to pour their capital into Macedonia.”

The Kazandol mine, a precedent for the rest of the mining concessions in the country, is being built by the hour and the consequences of the explosions have already shaken the daily lives of the local community. As some individuals from the community slowly come to terms with the fact that the construction of the mine is a reality and in search for existentially significant income start accepting employment and doing business with the investor, the perseverance of the dissident few in the coming months and years will be crucial to the eventual outcome of this struggle.

Recent calls by the local initiatives for the Belasica – Ograzhden – Kozhuf mountain range and for Lake Dojran to be proclaimed National Parks (i.e. protected areas) are appropriate demands. However, this process is expected to take years while the mines being built in the southeast are a reality currently unfolding.

Continuously denouncing mining projects that stem from a rotten neoliberal agenda that doesn’t take human rights into account, putting pressure on and holding decision makers accountable for their actions, as well as discussing community-led alternatives, are all activities without which the halting of extractive projects in Macedonia cannot happen. Any actual progress made by governmental authorities will only be the result of the local communities’ insistent efforts. In these times of political, social, and economic turmoil globally, practicing solidarity across communities, across countries, and uniting struggles nationally to loudly manifest people power, will be crucial to achieving the liberation of the affected communities. 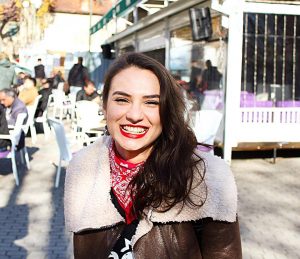 Simona Getova is a community organiser that holds MSc in Environmental Sciences, Policy and Management. Her research interests lie in the field of community-led alternatives. She is a storyteller and an avid admirer of reggaeton. You can follow her on @SimonaGetova.