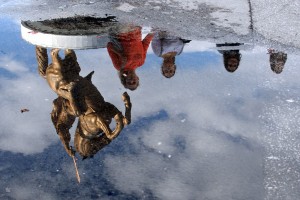 Macedonia has leading positions in many regional, European, even world rankings. For example, in the last Global Competitiveness Report 2014 – 2015 published by World Economic Forum, Macedonia is ranked first among 144 countries in the category ‘lowest total tax rate for companies’,[1] the country has second highest unemployment rate in Europe,[2] the lowest minimum wage in the region (143 EUR), the highest inequality in distribution of income in Europe,[3] and, after the Skopje 2014 project began, this country also has the highest number of monuments per capita in Europe.

The weak and vulnerable growth of the Macedonian economy in the past six years was mainly sustained by the construction sector, strongly supported by government investment in the megalomaniacal project – Skopje 2014.  Macedonia until recently had the highest unemployment rate in Europe. Unemployment was above 20% in 1990, but as the transition towards capitalism and the process of privatization began, vast number of workers lost their jobs and unemployment soared to 35.6% in 1995, staying above 30% since. In 2013, after the State Statistical Office (SSO) registered a decrease of the unemployment rate to 29%, the Government led by the ruling party VMRO-DPMNE proudly announced that this “major success” was due to their foreign direct investment (FDI) attraction policies, tax policies and active labour market policies (ALMP). In the period from 2007 up to 2009, the same Government began implementing operational plans for ALMP, introduced one of the lowest flat taxes on profit and income in the world (10%), and reduced the rates of social security contributions.  Having passed one of the lowest total taxes on labour, and major benefits and subsidies for foreign investors, the Government announced the new economic miracle in the country.

Seven years later, the Government is still enthusiastic concerning the effects of its introduced policies, but the reality is not encouraging. Despite the vast amounts of public money used to attract foreign investors and advertisements that were offering Macedonian workers as a cheap labour force, Macedonia still has the second lowest FDI in the region, next to Bosnia and Herzegovina. On the other hand, foreign investors who decided to open factories in Macedonia are very often driving workers below any decent working standards, paying minimum salaries (in some cases even lower), without additional bonuses for weekend working days.  If any worker or group of workers complains or tries to express dissatisfaction in public or in the form of a strike, the management usually fires those workers. The most recent case happened in Drekselmaer’s factory in the town of Kavadarci.[4]

Concerning the effects of the different programs in the ALMP, even after seven years of active use, there aren’t any publicly available detailed evaluations of their short and medium term impact, prepared by the Public Employment Service or any other government institution.  There are some occasional announcements by government ministers or commercials where the public can hear numbers and successful stories of employment through the programs of ALMP. Nonetheless, the public does not have relevant information, based on evaluation, about whether the most used programs in ALMP such as self-employment support, training and retraining, subsidized employment etc., have helped users to get or keep a job after the program has finished. But one thing is sure, the unemployed users of ALMP are influencing the unemployment rate at least for a certain period while the programs are active (usually, from several months up until 3 years).

Average real net salaries in Macedonia have been decreasing since 2009. According to the latest data from SSO, in 2013, 71.5% of the workers received lower than the average net salary in the country (350 EUR), while 29.2% of all the workers received a net salary in the range of 8000 – 12000 denars (130 – 200 EUR). Data on the low levels of new job creation, the extremely high youth unemployment rate (51.7% – 2013) and the high level of long-term unemployment (82.5% from the total unemployed population) reveal the static state where a once employed person has a tendency to stay employed, while the unemployed that looks for job a bit longer – very often stays unemployed. These circumstances have negative effects on the unemployed, but also on the employed, since they create a favorable environment for abuse of workers’ rights. In the past several years, the public has witnessed severe violation of the workers’ rights to strike and strong political pressures on strike leaders and strike participants. The most recent case involves the announced general strike of the professors in the primary and secondary schools organized by the Syndicate for Education, Science and Culture (SESC). In less than two weeks before the start of the announced strike, the Government managed, in express procedure, to prepare and pass in the Assembly new legislation for primary and secondary education, where it is clearly stated that, in case of strike, professors who join the strike shall be replaced with new temporary professors that will work instead of them, until the strike ends. With this act, the Government, in the most severe and manipulative manner, breaks the fundamental Constitution-guaranteed right to strike to express dissatisfaction with working conditions and rights.

Even worse for the precariat

Another recently announced change in the labour legislation will strongly affect the most vulnerable category of workers, the precariat. The new legislation changes encompass additional social security contributions that workers should pay (besides the personal income tax), if their additional monthly revenue is higher than the official minimum wage. These changes can have particularly negative effects on workers without permanent employment, because it will, in practice, lower their total earnings, since it is unlikely that the employer will raise the gross wages to make up for the amount paid of additional social contribution taxes. Government announced these legislation changes as a measure to provide social protection and lower unemployment for the category of workers that are hired under temporary work contracts. The great irony here is that most of the hiring under temporary working contracts is made by the Government.  According to the present legislation, temporary contract workers can pay their health insurance and pension insurance in the open voluntary pension funds, but their often low, unreliable and irregular revenues are primarily used for meeting the basic costs of living. One short glance at the financial state of the State Pension Fund and Health Insurance Fund will give the main reason for the announced legislation changes. Namely, the Funds are in bad financial shape and have hardly been sustainable for quite some time. The new obligatory social contribution tax on the additional earnings of workers will help Government cover the deficits that were created by its own irresponsible spending and antisocial policies, while it will leave many temporary contract workers with lower future revenues for survival.

Meanwhile, according to the last SSO data, 10% of Macedonian workers live below the poverty line, relative poverty increased from 28.7% in 2008 to 30.4% in 2011 (latest available data), and the percent of people living at risk of poverty or social exclusion reached 50.9%, or one half of the total population of the country. According to the latest World Bank data, Macedonia has highest inequality in distribution of income in Europe – the richest richest 20% of the population holds 49% of the total income, while the poorest 20% of the population hold 4.9% of total income. Now we can see why the ruling party’s main slogan in the latest Presidential election campaign – “The State above all”- makes complete sense. 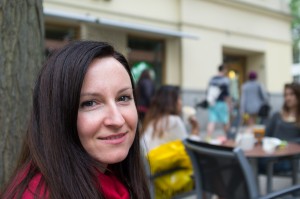