Note from the LeftEast editors: this livestreaming is part of our partnership with TalkReal. Below is the official announcement of the event. 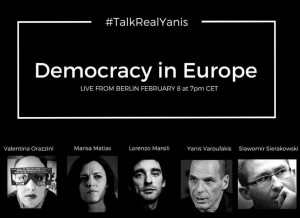 But beyond sterile arguments over the benefits of an independent nation-state or of a united Europe, we think that what we should really be talking about is how to organise to transform both.

That’s what we will discuss in this special LIVE STREAMED episode, a day ahead of the launch of DiEM25 from the Volksbuhne theatre in Berlin on February 8th at 7PM CET

Join us during the show by asking questions and commenting at#TalkRealYanis on our social media @euroalter @TalkRealTV and on EA facebook and TalkReal pages.