Leo Fischer: Corbyn- a major boost to the international Left? 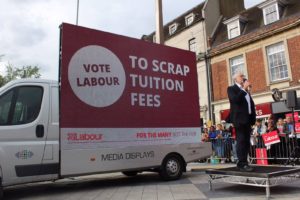 Even if Corbyn does not become British PM tomorrow, his performance will certainly be a major boost to an international Left, which finds itself completely demoralized in a world descending into barbarism. I don´t harbour any illusions on what Corbyn can achieve as PM or even within a Labour Party apparatus largely hostile to his agenda. But the one thing that I am grateful for, is the fact that an outsider, a long-standing campaigner on numerous social isssues, and a man of principles with no previous record of political vanity can – despite having all odds against him – reach out to millions. If the collapse of SYRIZA has taught me anything, it is not to trust a slick exterior, a deliberately ambiguous discourse (dubbed “populism” in the parlance of our times), and a naive belief in the “common sense” of those above. I expected Tsipras and Co. to come across some major structural obstacles in their project – but I never expected them to sell out so quickly and so willingly (and disgustingly I may add).The experience has, in the medium term at least, also proven the intellectual bankruptcy of “celebrities” like Yianis Varoufakis, whose DiEM25 movement is endorsing, among others, Liberal Democrats in this election while Corbyn is fighting the battle of his life. Corbyn has so far displayed all the right instincts while under attack, and his discourse has always been sharp and precise and to the point. Finally, he is the living proof that we do not need cool celebrities with condescending vague messages, but an approach that regards the working class as intelligent enough to know what´s in its best interest, avoiding the twin evils of elitism on the one hand, and dumbing down for the sake of a few votes on the other.

P.S. I should also mention that I saw Corbyn speaking live during a meeting of the Labour Representation Committee in 2013. I thought he was a sweet middle-aged man with nice ideas, albeit somewhat naive for hoping to steer the Blairite Labour party to the left. So, here´s one big Mea Culpa.

One Response to Leo Fischer: Corbyn- a major boost to the international Left?