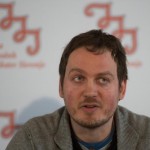 Goran Lukič works at the Association of Free Trade Unions of Slovenia as an expert on labour market policy, internal and web communication.

“In last few years trade unions have been put under enormous pressure to “oblige” the rules of so the called European semester, which is of course nothing else than a synonym for austerity measures. And we are fighting strongly against these politics. And there is of course the ever growing problem of precarity in the labour market, where we as a trade union are still searching for optimal ways of organizing this “new precariat”.”

LeftEast: May Day was once a symbolic day of struggle for the labour movement and then an official state holiday. How is it commemorated in Slovenia?

Goran Lukic: We commemorate Labour Day in Slovenia as an official state holiday. On the late evening before Labour Day we traditionally light a bonfire. These events are also organised by our trade union association throughout Slovenia. Of course Labour Day was, is and will be a day when we all remind ourselves of the daily fight for labour rights.

LE: The post-1989 transformation led to changes in the role of the unions in society. Could you tell us a bit about what it was like before and what it is like now? In particular, how would you say that these dynamics have impacted on the left in Slovenia, considering that traditionally Trade Unions have acted as the backbone of left mass movements?

G.L.: I couldn’t say what was it like before, because I started to work as a trade unionist in 2007, in the Association of Free Trade Unions of Slovenia. But I can say that in last few years trade unions have been put under enormous pressure to “oblige” the rules of so the called European semester, which is of course nothing else than a synonym for austerity measures. And we are fighting strongly against these politics. And there is of course the ever growing problem of precarity in the labour market, where we as a trade union are still searching for optimal ways of organizing this “new precariat”.

LE: Many commentators feel that globalisation has had an important effect on worker organisation (race to the bottom and threat of outsourcing, the rise of services, precarity, anti-labour legislation, etc). What are some challenges you have noticed and how have unions responded to these?

G.L.: The precarity pattern also means that more and more workers are forced from being workers to being a service, stripped of all their labour rights. This is a huge problem, which we are facing and trying to solve daily. But one big obstacle in solving this pattern is that with breaking up the labour market into smaller and smaller “units”, you also break solidarity between workers, and turn it into competition. All of this is a huge challenge for the trade union movement.

LE: Eastern Europeans are both sending and receiving countries for migrant labor. What campaigns have been made in Slovenia on migrant work either in reference to workers in diaspora, or to new migrant workers?

G.L.:I must be clear here. We are not campaigning, we are empowering migrant workers. We empower migrants through counseling offices for migrants workers, which are set up at the Association of Free Trade Unions of Slovenia, where I work. This office offers information and counseling to migrants, and we have established very good connections with the trade unions from the “receiving” countries, for example Germany.

LE: Female work – and especially care work – has been one of the main “exports” of Eastern European countries. At the same time, women who have stayed in the region have often been hired as domestic or unskilled workers by outsourced factories. Have the unions in your Slovenia addressed these issues, and has gender been a topic of their work?

G.L.: Gender is certainly a topic of trade union work. And I must say that our above-mentioned services, which we give to migrants, is of course at the disposal of all migrants, no matter sex, age, etc. And to be a bit stereotypical – it’s not female care work that has been or still is one of the main “exports” of our country. It’s the construction migrants who are at the front of the migration flows lately, specially posted construction workers, who originally come from Ex-Yugoslavia countries.