Tijana Okić is a philosopher and one of the founders of the Sarajevo Plenum. She teaches at the University of Sarajevo and translates from English,French and Italian. 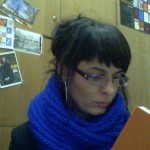 “Feminism has been reduced to gender mainstreaming policies conducted either by state bodies or by the ocean of NGO’s, which depoliticize not only feminism, but also have negative longterm effects on women’s lives and the process of emancipation in post-war Bosnia and Herzegovina.”

What does the 8th of March mean in Bosnia and Herzegovina? How is it celebrated today, and how do you think its meaning/celebration has changed in recent years, and especially in comparison to the YU-days?

Can you comment on the current social situation of women in Bosnia and Herzegovina? In particular are you able to judge whether there has been progress or decline in the post-socialist years compared to before?

Women are thus faced with several important issues: first, they have to face the brutal imposition of capitalist and neoliberal regimes attacking social security and cuts that affect women in a specific way. In the context of capitalism and neoliberalism we live under permanent insecurity, precarity and we must not only look after the family, but also the extended family. Due to changes in the past 20 years, women have either lost or are losing both their social and economic rights. The conservative turn in politics, the imposition of austerity measures and the forced return to the private sphere have changed the material and overall social, political and economic position of women. Feminism has been reduced to gender mainstreaming policies conducted either by state bodies or by the ocean of NGO’s which depoliticize not only feminism, but also have negative longterm effects on women’s lives and the process of emancipation in the post-war Bosnia and Herzegovina.

I think that this question is misplaced. The very idea of an ispiring women is redolent of the role-models of capitalist society: the entrepreneur, the political leader, the official. Feminsm, like socialism is a mass practice of social liberation. Our models to a large degree still come from the past.

Вы жертвою пали was a funeral march originating in Russia circa 1878, later sung for the fallen of various uprisings, culminating, of course, in the communist October Revolution of 1917. It continued to be sung in the Soviet Union less frequently thereafter, making some appearances during World War II. Subsequently, it was incorporated into Shostakovich’s Symphony No. 11, Op. 103, Mov. III.