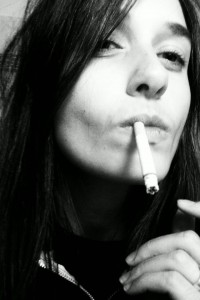 “The new textile factories, which fuel Bulgaria’s exports to Western Europe offer local women primitive working conditions and a pay that is often delayed and withheld. This precarious work environment is rife with industrial accidents. In the most notorious case, two women died of exhaustion on the shop floor of a textile factory ironically called ‘Euroshoes’. The owner cynically pledged to offer the same jobs to their daughters once they reach adolescence.”

What does the 8th of March mean in Bulgaria? How is it celebrated today, and how do you think its meaning/celebration has changed in recent years, and especially in comparison to socialist times?

8th of March in Bulgaria is subsumed by a patriarchal logic. It is a day that celebrates not the victories of women’s struggles for rights and emancipation, but women’s “timeless” womanhood, beauty, charm, devotion (to family) motherly functions, and suchlike. Men are expected to present women with flowers and gifts and show devotion amidst “critical” reminders that “devotion and respect to women must also be shown every day.”

Unfortunately, this is not solely a post-socialist reaction but a continuation of the patriarchal way in which the 8th of March was marked during socialism. We have to acknowledge, though, that during socialism, women were gifted flowers not only by their husbands, but also by the factory. That is to say, the day also constituted a recognition of women’s contributions for the construction of socialism and its economy, and not just of their “timeless womanhood”.

Nowadays there are also debates as to whether the day is worth mentioning at all since it is a “communist” invention, and these debates ultimately limit political discussion of what used to be a political question: women’s struggles. A few years ago there was an attempt at a different type of politicization of the cheesy “8th of March” – a group of young left-wing activists staged a protest against violence meted out on women, especially in the workplace. They protested against the brutal attack of Kostadinka Kuneva, the SYRIZA MEP who at the time worked as a cleaner in Athens and whose face and esophagus were severely burned with vitriol, to punish her for her involvement with the cleaners’ trade union.

Can you comment on the current social situation of women in Bulgaria? In particular are you able to judge whether there has been progress or decline in the post-socialist period?

Just like in all EU-countries there is a pay gap in Bulgaria (14.7%, according to latest reports), albeit not as severe as say, in Austria (23.4%) and Germany (22%). Thankfully, after 1989 Bulgaria did not become as religiously fundamentalist so as to ban abortion. And unlike in Poland and Hungary, there is not even a debate on this issue at present.

Right now there is a raging debate on whether to introduce quotas in Parliament for women. The debate is happening at a time when we have the lowest number of female MPs, ministers on key political positions since 1989. (Curiously, one of the parties with most female MPs is the far-right Ataka.)

With regards to employment, there is a tendency of feminization of the last re-industrialization wave, which has affected the South of Bulgaria. The newly operational textile factories, which fuel Bulgaria’s exports to Western Europe offer local women primitive working conditions and a pay that is often delayed and withheld. This precarious work environment is rife with industrial accidents. In the most notorious case, two women died of exhaustion on the shop floor of a textile factory ironically called Euroshoes, and the owner cynically pledged to offer the same jobs to their daughters once they reach adolescence.

Many women are also forced to emigrate in search for better pay and they often end up working as carers for the elderly in places like Italy, as domestics or as fruit pickers in the UK, Greece, etc. Thousands become victims of human trafficking and are forcibly sold into prostitution in the West (also in countries where prostitution is legal such as the Netherlands and Germany). 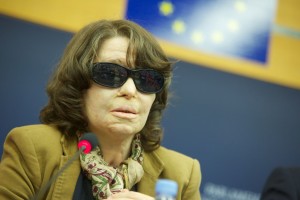 Who for you is an example of an inspiring woman?

Kostandinka Kuneva, the Bulgarian SYRIZA MEP who I mentioned earlier is really inspiring. As mentioned above, she sustained heavy injuries (including losing an eye) in 2008 after being splashed with vitriol and this attack sparked a widespread protest movement in Greece. Only in 2013 did the state find the company for which Kuneva worked responsible and fined it, but the perpetrators are still unknown. Kuneva was punished by her bosses for her trade union activities, through which she tried to broker better conditions for cleaners caught up in the highly exploitative practice of subcontracting, which dooms them to precarity and low pay.

Which song would you say sends a strong message relating to the situation of women in Bulgaria?

One Response to International Women’s Day in the Balkans: Jana Tsoneva