Eirini Gaitanou, is a PhD student at King’s College London, studying social movements amid the crisis in Greece. She has been active in the social movements in Greece for over a decade and has participated in both practical and theoretical debates during this time. She is a member of the anti-capitalist coalition ANTARSYA, on whose ticket she stood as a parliamentary candidate in the recent elections. 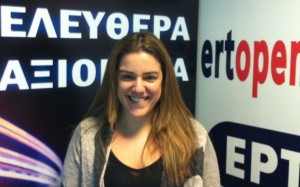 “The reality brought about by the crisis affects women to the fullest extent. The collapse of social protection and the closure of social services (childcare and nurseries, health units, refuge shelters for abused women etc.) has meant that the responsibility for the provision of these needs is passed to the family and especially women.”

What does the 8th of March mean in Greece? How is it celebrated today, and how do you think its meaning/celebration has changed in recent years?

In Greece, the tradition of women’s struggles is quite important, though it remains poorly known. Because of historical and political reasons, this tradition has had an intense class orientation, strongly tied to the labor movement. There were two principal moments of the Greek feminist movement, the first being the inter-war period (in the 1920s), marked by women-labor struggles with important victories. The second one has been the radical feminism of political change in the period after 1974, which echoed the European movements of ’68. Having a more liberal outlook, feminist movements of the time led to the establishment of important civil rights, while this was the first period when mass demonstrations were organized, and more radical – though rather marginal – currents emerged. During the 1980s’ many autonomous feminist collectivities were formed, as well as women’s groups in trade unions, political parties etc, whilst several feminist journals and reviews were published. However, during this period, a more institutional version of feminism flourished, in part owing to the dominance of PASOK (the Socialist Party), which contributed to a relative disregard for feminist issues by the Left. This disregard is also due to two elements: First, the prevalence of conservative values in Greek society, and a more traditional perspective on gender roles. And second, the development of more linear, static theoretical schemata, which tends to subordinate all contradictions to that of the dominant capital-labor conflict.

Thus, although Greek society is characterized by the development of important social struggles, especially in recent years, the feminist movement is rather small, women’s demands are mediated through other social representations, the political debate over gender is under-developed and the 8th March celebration is not central in society. It is however true that during recent years, this underestimation of feminist issues has been somewhat challenged, and a new potential for the development of feminist struggles has begun to emerge.

Can you comment on the current social situation of women in Greece? In particular are you able to judge whether there has been progress or decline in the past two-three decades?

In the last decades, there has been certain progress in the social situation of women. However, the period of the crisis, which, as is well known, affects Greece in a very intense manner, has led to an exacerbation of contradictions and of women’s exploitation. The situation in the labor market is drastic, and has included a sharp increase in unemployment and of flexible and precarious employment, the rapid deterioration of living conditions, intensification of class polarization, and the frequent circumvention of fundamental labor and social rights. This reality affects women to the fullest extent. The collapse of social protection and closure of social services (childcare and nurseries, health units, refuge shelters for abused women etc.) passes on the responsibility for the provision of these needs to the family and especially women. Elementary measures on gender equality have been reversed. In the private sector, basic rights are questioned. There are many cases in which the law itself is explicitly violated. Many women are fired when becoming pregnant or during the period when motherhood is supposed to be protected, or they are forced to quit, refused their proper licenses or the special compensation provision. There are certain cases in which they are forced to sign agreements that they do not intend to get pregnant, are paid less because of that possibility, or are even threatened with violence.

Other consequences of the crisis are related to the intensification of domestic work, but also a relapse towards conservative values and the respective division of gender roles, the reproduction of sexist practices and discourse, the exacerbation of intra-familial and sexist violence, the commercialization of sexuality and the female body, and the development of reactionary state and paramilitary policies (a phenomenon that is also related to the rise of the fascist Golden Dawn).

Can you give an example of an inspiring woman from your context?

I think the most appropriate answer would be to refer to the unknown rebel woman of the Resistance against the occupation during WWII (1941-45) and the civil that followed (1946-1949). This was a time when important progress was achieved on the position of women and their emancipation. The National Liberation Front (EAM) and the following Democratic Army of Greece (DSE) pioneered a largely progressive view, establishing women’s suffrage in the elections for the National Council of the Political Committee of National Liberation in ‘freed Greece’ (the ‘Government of the Mountain’) in 1944. An article in the government’s code established “the equality of political and civil rights for men and women” for the first time in Greek political history. Women played an important role during the civil war by participating en masse, not only in auxiliary roles, but often “with guns in their hands.” The defeat of the Left forces in the civil war had an immediate impact on the position of women. Women that participated in the Resistance and in the forces of the EAM and DSE were shot, imprisoned and sexually tortured or humiliated, but also raped en masse, and had their hair cut in public. These women were called the “whores of the villages”, the “EAM-Bulgarians”, who were usually stigmatized forever. These attacks were not simply made in retaliation for the war; they specifically aimed at the reversal of the progressive gains regarding the position and role of women in society achieved by Left forces during the war.

However, if I had to choose a specific figure, this would be the mythical Antigone (best known through the famous play by Sophocles). Antigone has long been a symbol of resistance to power, especially because she is aware that her confrontation with Creon will lead to her death. At the same time, she has been a symbol of the affirmation of freedom; fearlessly defying law and injustice, and standing firm against compromises. A strong voice that still has the power to trigger and awaken us.

The song I have chosen is called “The river” (“To potami”) and comes from the CD “Pandora’s Box” of November 1984, by Nena Venetsanou. That CD included feminist songs, with references to women’s struggles, written by Venetsanou and other women. Translating some of the lyrics, it says that…

“A river begins from here
a river that will sweep the seashore,
it is woman that wakes up,
you cannot stop her,
nobody can.

A river flowing brisk,
a river that has no way back,
the water is the woman
and she cannot stay quiet,
not anymore.

A second, more contemporary and beautiful song on women, would be the song called “Her” (“Ekeini”), by Foivos Delivorias. The video-clip of the song is filmed in a student general assembly at the Philosophical School of Athens.