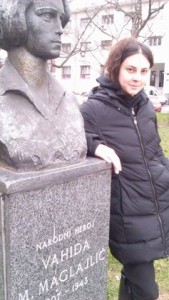 Ana Vilenica is a researcher, theorist and an activist. She is the editor of the book Becoming a Mother in Neoliberal Capitalism, co-editor of the book On the Ruins of the Creative City and the chief editor of uz)bu))na))) journal for art, politics, theory and activism. She regularly publishes texts on social issues in anthologies, journals and portals.

“The austerity measures in Serbia have a strong gender dimension. Their implementation is increasing gender segregation of labor, mental and physical insecurity of women, puts pressure on women’s reproductive decisions and contributes to the retraditionalisation of gender roles in order to preserve the ethno-capitalist order.”

What does the 8th of March mean in Serbia ?

The beginnings of the 8th March celebrations in Yugoslavia were part of the revolutionary spirit of the time, the struggle against fascism and the bourgeois and royal regime, as well as the struggle for equal political and economic rights of women. In the first years of socialist Yugoslavia, it was commemorated in a spirit of enthusiasm, optimism and endless work that was largely organized by the Anti-Fascist Front of Women (AFŽ) which made huge steps towards the transformation of the previous enslavement of women. That the position of women was improved systemically in Yugoslavia, we can tell by the fact that in the seventies maternity leave increased from 135 days to eight months, while in 1986 it was rounded up to one year.

Still Yugoslav self-management was facing many problems and contradictions which left significant number of women out of full employment and with that out of full emancipation. The divergence between reality and ideological and practical-political optimism led to a situation that for many made Women’s day look like a demagogy.

With ‘transition’, a consumerist gust took hold which led to the trivialisation of the status of women. Today, 8th of March again has become a battle field. Austerity measures have made it evident that the capitalist patriarchy and the subordinate positions of women are not natural facts but economic, social, political and cultural constructs. This has led to a situation in which an increasing number of voices in public are demanding the end of the concealment of the status of women behind flowers and gifts. On the other hand a march organized by feminist and women’s organizations shows a new fighting spirit that seeks to re-politicize Women’s Day as a combat-celebration expressing solidarity with women workers and requesting the right to decent work. Still, calling things by their name is only the first step in the fight ahead.

Can you comment on the current social situation of women in Serbia? In particular are you able to judge whether there has been progress or decline since YU-times?

The austerity measures in Serbia have a strong gender dimension. Their implementation is increasing the gender segregation of labor, mental and physical insecurity of women, the pressure on their reproductive decisions and they contribute to the retraditionalisation of gender roles in order to preserve the ethno-capitalist order. The burden of the cuts in social and health services falls on women’s backs. The ones who still dare to depend on public money are referred to as thieves of public money in the media. That is a culmination of the long term degradation which started with austerity in the 1980s in Yugoslavia and intensified throughout a period of war and “transition”. Under socialism, the emancipatory mechanism was based on full employment of women and the socialisation of reproductive work. This was never put fully to work under socialism, but nevertheless the socialist mechanisam produced much better results compared to what we see today in relation to general equality.

A lot of inspiring women have crossed my path. Many comrades, teachers, pensioners, waitresses, activists, lawyers, artists, workers, farmers, architects, nurses, writers, partisans, with (feminist) politics gave social shape to the contradictions that they experienced in themselves and thus made our freedom necessary. They all encouraged me to speak and fight against social injustice, but also to face that part of me that participated in the oppression.

This is the Slovenian version of the “Women’s Anthem” commissioned for the Congress of the Anti-fascist Front of Women in 1945. It is performed by the self-organized female choir Kombinat. By awakening forgotten struggles, convictions and solidarity in the ethno-capitalist societies in which we live, this revival has the potential to open the space and new hope for a better future.