The shutdown in rural India coinciding with the trade union’s strike will unite the farmers and workers to challenge the pro-corporate and anti-people rule of far right BJP government. 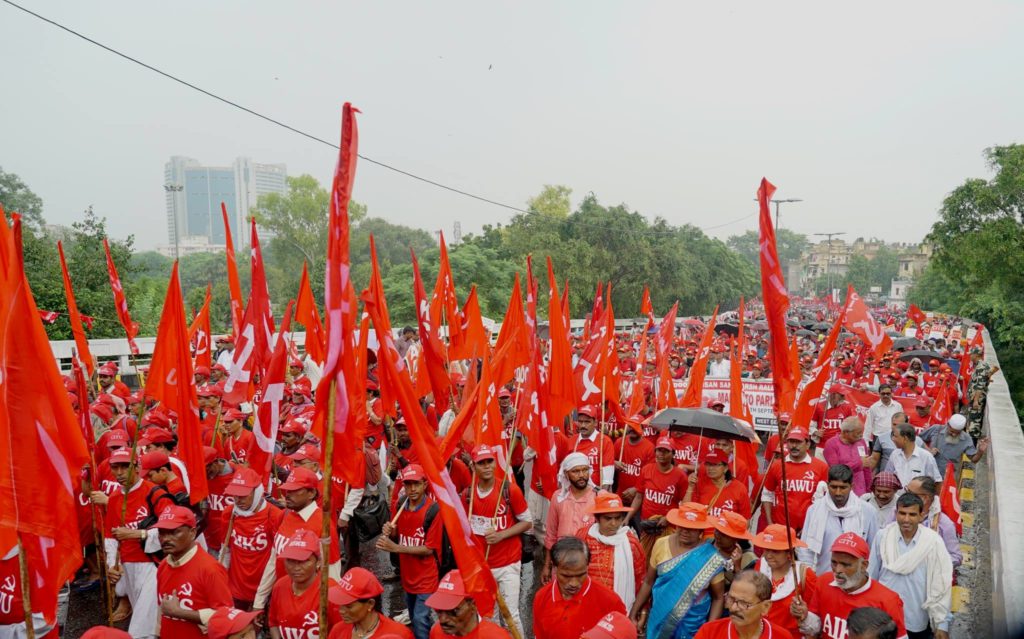 Building a massive resistance against the neoliberal policies of the Indian government, farmers’ organizations have given a call for a nationwide strike coinciding with the two-day general strike by trade unions. In September this year, 10 central trade unions and independent federations gave a call for a nationwide strike on January 8 and 9, 2018.

On Tuesday, December 18, Communist Party of India (Marxist)-affiliated farmers’ union, All India Kisan Sabha (AIKS) gave a call for a two-day Gramin Bharat Bandh (Rural India Shutdown) on January 8 and 9, 2019. Ashok Dhawale, president of AIKS speaking with Peoples Dispatch said, “The bandh in rural India, along with the trade union strike would unite the farmers and workers to challenge the pro-corporate and anti-people regime of Bharatiya Janata Party (BJP).”

The call is supported by the Bhumi Adhikar Sabha, a platform of various people’s organizations demanding land for poor farmers for agricultural purposes.

Farm loan waiver and land allotment to poor farmers are the two major demands put forward by the AIKS.  Dhawale noted that the bandh will also be against the increasing religious polarization tactics employed by the far right-wing government headed by Prime Minister Narendra Modi.

“Corruption, communalism [religious polarization], and corporatization, which marks the policies of BJP rule will be resisted by the people of this country. We have seen how the BJP lost in Madhya Pradesh, Chhattisgarh, and Rajasthan, as farmers and workers united for their rights,” Dhawale said emphasizing that people’s movements will be strengthened in the coming days.

India is currently witnessing an agrarian and economic crisis, marked by continuous erosion of farmers and workers’ rights. More than 50 percent of the population, which includes farmers and agricultural laborers from the country’s agricultural sector, has been affected but little support has been provided by the government. According to the National Crime Records Bureau (NCRB), nearly 48,104 farmers and farm laborers committed suicide between 2013 and 2016. And the crisis is exacerbated by government policies supporting the corporatization of agriculture and forceful land acquisition by private companies.

Renowned journalist P Sainath, in an article noted that “India’s agrarian crisis has gone beyond the agrarian. It’s a crisis of society. May be even a civilizational crisis, with perhaps the largest body of small farmers and laborers on Earth fighting to save their livelihoods.”

In the past one year, the country witnessed three major farmers mobilizations, in August, October and in November. In these movements, more than half a million farmers protested in the Indian capital calling for an end to the neoliberal and anti-farmers’ policies of the government.

“While the government is refusing to provide loan waivers to poor farmers, rich corporate loans are being waived off. This government is of the corporates and what we want is a people’s government,” Dhawale noted.

The recent farmers’ march on November 29 and 30 demanded a special session of the Parliament to be held to discuss the agrarian crisis, and the National Commission on Farmers’ 2006 report. The report had recommended crop acquisition by the state at a minimum support price (MSP) which is 50 percent above the full cost of production and redistribution of ceiling-surplus land to the landless.

Since the Hindu conservative BJP government came to power in 2014, there had been attempts to dilute the labor laws under the banner of ‘ease of doing business.’ Trade unions have warned that the continuous trampling of workers’ rights will be met with severe resistance. In November 2017, more than 3,00,000 workers from various trade unions (except Bharatiya Mazdoor Sangh (BMS), trade union close to the ruling government) organized a Mahapadav demanding the government to end the assault on working-class rights and its neoliberal policies.

Announcing the nationwide general strike call, the workers’ convention held on November 28, 2018, put forward a 12-point charter of demands, which included strict enforcement of all basic labor laws and stringent punitive measures for violation of labour laws, universal social security cover for all workers, minimum wage of not less than Rs. 18,000/- per month with provisions of indexation, stoppage of disinvestment in Central/State PSUs and strategic sale, ending contractualization in permanent perennial work, equal pay for equal work, urgent measures for containing price-rise through universalization of public distribution system and containing unemployment through concrete measures for employment generation