Note from the LeftEast editors: Last Saturday employees of  Népszabadság  newspaper, the widest circulated daily in Hungary, found themselves locked out of their workplace and told they were no longer needed. On the  Népszabadság  editorial team facebook page the team team wrote: “Our first thought is that this is a coup. We will soon come back with more” after the newspaper’s website , stopped working , and invited the public to join them to demonstrate at Parliament later that day. They were joined by some 2,000 people. This article is translated into English for LeftEast by Lolo from the French translation in consultation with the Hungarian original . 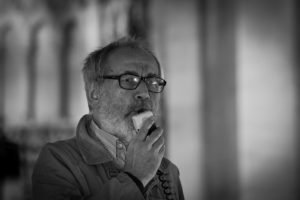 G.M.Tamás at the rally in front of the Hungarian Parliament in Budapest on Saturday 8th of October. Photo credit: B. Molnár Béla

Some online readers are debating what sort of newspaper Népszabadság was. I have even read in a comment that the word népszabadság [Popular Liberty] is a bolshevist word, an artificial invention. But it originates from 1848, [Hungarian revolutionaries] Petőfi and Táncsics both used it back then.

Anyway. Many of them write that Népszabadság has not been a left newspaper for a decade. It is true. (As it is true that “left” opposition is not on the left. In the current journalistic language the “left” is whoever opposes to Orbán. These are childish futilities.) None of this has anything to do with the problem with which we are confronted here. It is not just about the damage to left media or cultural magazines, but to more all spaces where some buoyancy is still experienced.

The heart of the problem is that the governing right unravels little by little – or leaves to disappear – all of the independent institutions. This practice undermines the little bit of optimism that was because of, or rather accompanied, the regime change in 1989.

The freedom of the press is not a question of democracy but of the prior conditions of democracy. It is not the people who are debating in written press and other media nor in the interactive and/or participatory media, or in the more-or-less independent blogosphere. It is not the people, but journalists, pundits, activists, committed people, unhurried weirdos who exchange opinions, with their own lifestyles, and specificities and prejudices that come with their lifestyles. Most of the media are just commercial enterprises undermining public morality.

If we approach it from the liberal prejudices, the press operating under the freedom of the media mimics public life. Public life must happen among all citizens (the lay majority). This is not the public, it is especially not the democratic public. In the best case it is an theatrical or pedagogical preparation; on top of that, in a largely imperfect form. But at least, it embodies the abstract idea that there exists an infinite diversity of opinions and interpretations.

And between us-authority and violence cannot give a verdict on these opinions and interpretations,-however partial or far from the aspiration and interest of the people they are.

This minimum condition (the minimum- which means still too little) is essential to prepare for popular rule and popular liberty.

Public life in the democratic spirit and democratic public morality (both of these are in the current conditions is a utopia worldwide -but, no problem) require the state to represent the public interest, not it’s own, and even less the individual interests of few. The interest of the people (meaning everyone, except rich and powerful – ultimately the majority of the people) is closer to the public interest than the individual interests of the few privileged groups. At least, in their competition, the professional (but not quite authentic) public does not defend the sole interests of one privileged group, but of many, and occasionally, those of one or the other the “underprivileged.” Sometimes.

If this also ceases to exist, the discussion, the development, the elaboration and defense of democratic objectives – or say, the fight for these democratic objectives – won’t be possible either. Even less so than now. This is why people from the left have to defend the freedom of the press, which is either freedom for all (that is, all types of media, all types of public opinions) or freedom for no one (that is, the liberty of tyrants).

There is no doubt that those who are putting the end to Népszabadság are malicious. Even if this newspaper, the best daily in the Hungarian language, wasn’t a perfect one and I have not agreed with its dominant political orientation (beyond the fact that it has gallantly published my writings often contradicting the world-view and taste of the editors). It is really too bad, and it would also bebe a shame to a certain degree if it was about kuruc.info [close to Jobbik] Magyar Hírlap [close to Fidesz]. I truly regret that during this past Saturday night’s demonstration copies of Magyar Idők [close to Fidesz] were burnt. Democrats should not burn newspapers or books. Not because our political adversaries shouldn’t be our adversaries, but because one precondition of democracy is the freedom of speech for those opposing democracy. It’s a platitude, but a platitude fair and true.

It is not limiting the freedom of those who favour suppressing the newspapers with which they do not agree that we need, but rather to fight to deepen the preconditions of popular liberty, popular power and popular sovereignty we need. The major condition (the precondition of the precondition) for this is the freedom of debate in the press and the plurality institutions of public life. Naturally, institutional public life is the public life of the bourgeoisie. In a bourgeois society –the kind that in Orbán’s Hungary – and please don’t of the sophisticated burger/bourgeois of Thomas Mann, Proust and Márai, but rather the capitalist bourgeoisie- this is unavoidable. This is particularly so if there are not (and there are not) large class movements against the bourgeoisie out there.

So, the suppression of Népszabadság (or if the right dances back in face of the public outcry then just its destruction) is an atrocity, as I said in my speech during the demonstration. It remains atrocious despite the fact that we are have no illusions about the bourgeois and the liberal press. We have no illusions, even if we publish in those newspapers, which influences our political style (whether we want it or not). The plebeian and left democrat who does not forbid the suppression of Népszabadság, the limitation of the freedom of press, the stamping out of the freedom to learn, the restrictions of the freedom of arts and against similar things, is a self-destructive idiot, a dupe.

G.M. Tamás, a Hungarian philosopher and a prolific writer of essays, was born in Kolozsvár/Cluj (Transylvania, Rumania) in 1948. After a brief spell as an associate editor of a Hungarian-language literary weekly, he was blacklisted from publishing and harassed by the secret police of the Ceauşescu régime. Forced to emigrate to Hungary in 1978, he taught for two years at the University of Budapest (ELTE), then he was fired for having published (and signed openly) illegal tracts in samizdat. He had subsequently become a leading figure in the East European dissident movements. From 1986 to the present day, he has held a number of visiting appointments (at Columbia, Oxford, Wilson Center, École des Hautes Études en Sciences Sociales, Chicago, Wissenschaftskolleg zu Berlin, Georgetown, Yale, New School etc.). He was elected to Parliament in 1990 and elected Director of the Institute of Philosophy of the Hungarian Academy of Sciences in 1991. In 1994 and 1995, respectively, he has stepped down from both.  His views on political philosophy and political theory shifted gradually to the left. He is said to belong – with Žižek, Badiou, Kurz, Negri and others – to the company of heretical European Marxists.  Professor Tamás’s works (in Hungarian), are numerous: among others, an essay on Descartes (1977), Törzsi fogalmak (Tribal Concepts, collected philosophical papers, 2 vols, 1999), others had been translated into fourteen languages (or written directly in English), e. g., L’Oeil et la main (1985), Les Idoles de la tribu (1989), ‘Telling the Truth about Class’ (Socialist Register 2006), Innocent Power (2012), Postfascism şi anticomunism (2014), Kommunismus nach 1989 (2015) and so on. He has four children and lives – mainly – in Budapest, Hungary. He is in the habit of writing for newspapers and of speaking at demonstrations and left-wing gatherings.