Hope in a Hopeless Place 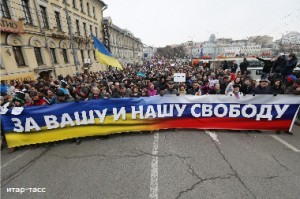 Why is there no anti-war movement in Russia? Because today there are so few who are ready to go into the streets in order to publicly throw in the face of the state accusations of prolonging the war in Eastern Ukraine? Such are the questions that we continue to pose to each other, those of us who several months ago supported the March 15th “March of Peace” in the center of Moscow. The circle of such people continually shrinks, but most importantly even those who still in their hearts support the protests are no longer sure that protest can change anything.

If there is a point of consensus uniting various social and cultural strata in the new state of war (or pre-war) into which Russian society is sinking all the deeper, then it is in this smothering and eerie consciousness of one’s own total powerlessness before the elemental power of interstate conflict. And without even an unstable system of coordinates each separate citizen is overwhelmed by the flow of news. The psyche cannot support the pressure and capitulates to the uncognizable and opaque logic of events, which, it seems to us, is less and less able to obey any concrete will. “Not knowing how to control the war, the war controls consciousness,” wrote Lev Trotsky about that war at the beginning of the century which a few timorously remember today.

The unfortunate inhabitants of Lugansk and Donetsk are today on the leading edge of the encounter with the destructive elements of war. Their testimony on the social networks — the exchange of the sparse data on the killed, the photographs of the destruction of artillery bombardment, requests and responses to them of elementary empathy — this is the voice of the victims, the voice of those who have already lost. Here there is no separation of the partisans of “New Russia” or “United Ukraine”, they do not await the victory of “their side”, but only of peace — no matter from where, on whatever conditions, from whichever power. In place of houses, infrastructure, schools and hospitals, in Eastern Ukraine society is destroyed practically to its foundations. And this means that the winner, able to bring stability even if to smoking ruins, will receive such a level of submission and obedience of which no state in peace time could even dream.

The waves from this barbaric destruction cover the population on both sides of the border. It is already a commonplace to assert that from this March domestic politics seems to have disappeared from Russia. Furthermore, according to the definition of the philosopher Jacques Rancière, it is possible to affirm that politics as “a form of human activity based on disagreement” has quickly disappeared, and conversely, that state policy as “an art of managing community” has achieved perfection. Anything that diverges even a millimeter to the left or right of the president’s line is instantly devalued, forfeiting any hint of independent thought. Those who try to applaud the state louder than the rest are just as politically invisible and powerless as those who set themselves against it. The patriots supporting their state instantly transform into its obedient instrument. The liberals critiquing their state willingly or not begin to speak as advocates of the enemy.

The logic of war unavoidably leads to the identity of the state and the people, their full merger one with another, mercilessly annihilating any marks of “disagreement.” This identity is based, despite widespread opinion, not only on the chauvinism quickly impregnating collective consciousness. War’s “unity of the nation,” to which we are approximately today, draws its strength from the fear of instability, from the expectation of defense from above, from the feeling that subjects and rulers are, in the end, “in one boat.” It’s hard to describe what an improbably free hand the state has with respect to its citizens in such a situation. This victory of the ruling elite over their own society — at least in the near term — counterbalances losses and sanctions and the shame of international isolation. Today it is impossible to predict how long this state will persist— in any event, the prior successful history of “wartime unity” often has been able to hold the majority in absolute submission for years.

So what is the anti-war movement we need today? One must honestly say that almost never has a civilian antiwar movement, no matter how massive, succeeded in preventing or stopping a war. From the beginning of the First World War more than three years of colossal death and destruction were necessary before the supporters of “peace without annexation or indemnity” transformed from marginalized minorities in their countries to a force able to change the course of events. The well-known movement against American intervention in Vietnam tried to affect social opinion in the West for almost a decade before a new president, in the face of serious losses, could begin the withdrawal of troops. Finally, in February 2003 in London, the most massive anti-war demonstration in all history (with more than a million participants) against the invasion of Iraq was simply ignored by the government of Tony Blair. But the anti-war movement even then, when it clearly was swimming upstream, had one improbably important function: to speak the truth. State propaganda, demonstrating in the past months its colossal power, lies not only for the sake of lying: in the state of “wartime unity” the lie becomes the direct continuation of military action and stands out as the key means for strengthening the “domestic front.” And trust in this lie and sympathy with its spread transforms into civil virtue, into a responsible understanding of “the state interest,” of which every citizen begins to feel him- or herself the agent. In the last months many of us have discovered that we can reach the truth only with the help of comparison with the war’s lies, issuing from both sides of the conflict. This method today is largely without alternative, however it holds within it an enormous danger: at any moment one of the sides can begin to seem more convincing.

The anti-war moment, if it is really trying to bring disagreement back to society, should hold a “third position.” The victims, the defeated and intimidated, everyone whose own voices has been stripped by “wartime unity,” should regain that voice in the anti-war movement. Such a movement fundamentally should not determine the greater or lesser degree of responsibility of each side, it should not “understand the point of view” of those who never have taken our point of view. Exactly for this reason, in today’s situation the anti-war movement in Russia, speaking out against its own government, can be honest and effective to the end, if it will go together with the same such movement in Ukraine. Both in Moscow and in Kiev we should again and again put into question the right of the state to monopolize the representation of “the nation.” This “third position” — barely heard, almost unnoticed — can be easily lost in the humanist pathos of the willing or unwilling bearers of the lie of “the state interest.” If an analysis of the situation in the Donbas completely excludes the direct interference of Russia and events are interpreted exclusively as a “civil war” in which the Kievan government of oligarchs fights against its own people, then in a second, to the contrary, everything boils down to a hidden Russian intervention and all elements of internal conflict are consequently ignored, then before us is only the next variation on “the cunning of war.” To speak the truth means not only to unmask propaganda, but also to point out the reasons for military conflict: the fight for military spending, the redistribution of markets and property, the determination to establish complete control on those below in the interests of the elite. A hundred years ago, such a message, seemingly radical, utopian and naive, in the end changed the world. And this fact, it would seem, could suggest hope in our hopeless place.

Translated by Adam Leeds. The Russian original was published on Colta.ru.

2 Responses to Hope in a Hopeless Place