This piece originally appeared on the Serbo-Croatian language portal, Bilten. It is reproduced here with generous permission from their editors.

The last time I wrote about the oil industry in Albania was the spring of 2015. An enormous eruption of natural gas and oil occurred near the village of Patos-Marinzë, in southern Albania, where the Canadian-based company Bankers Petroleum has been drilling for years. Some people got injured, homes were partially destroyed and, more importantly, many inhabitants of the area and of nearby villages have continuously reported an increasing number of diseases linked to this environmental pollution, even some cases of unexpected cancer symptoms. Public uproar forced the Albanian government to investigate the deeds of the company, which, notwithstanding the recent explosions, has always claimed that the environmental pollution is an effect of previous and environmentally hostile technology, for which it is not responsible.

A thorough investigation by the governments’ fiscal institutions reached the conclusion that Bankers Petroleum has been responsible for almost $50 million in tax evasion. It accomplished this by a series of shadow subcontracting deals with adjacent companies, whose rate of profit has sometimes reached an abnormal 50-70%, allegedly false reports of its revenues and a swelling of input and technological costs. The Albanian government decided to freeze Bankers Petroleum’s bank accounts and fine it $57 million.

What is happening more than a year and a half later? Bankers Petroleum has threatened to bring the Albanian government to international courts for commercial discrimination. Due to the pressure, the parties have agreed to solve their dispute by referring to two international auditing firms. In the meantime the Albanian government unfroze Bankers Petroleum’s accounts and forced it to pay 10% of the fine, plus an additional $4.3 million each month, until a common verdict was reached by the auditing firms. Unfortunately for Albania, these firms, while acknowledging some of the irregularities of Bankers Petroleum, decided in the latter’s favor. This means that the Albanian government should return to the company not only what it was forced to pay until then, but also exempt it from paying the rent for the last year of its activity in Albanian mines.

There are public critiques circulating that the Albanian government is complicit with Bankers Petroleum and deliberately did not engage with the requested vigor and seriousness in an international legal dispute which should have been in its favor, considering the fact that Bankers Petroleum’s oil production has expanded year by year, comprising almost 5% of the total annual Albanian exports, and nonetheless the company is declaring losses.

What adds an international dimension to the Bankers-Albania relationship is the role of the US embassy in Tirana. A couple of weeks ago the Attorney General of Albania declared that the US ambassador in Albania has been putting pressure on him not to investigate the misdeeds of Bankers Petroleum.

Meanwhile, the environmental problems in the nearby villages go from bad to worse. Artificial earthquakes, triggered by oil drilling, have been reported in the village of Zharrëz, where the inhabitants have recently been mobilized in protests, and even blocked the national road for an hour or so. Some days later at least 10 persons started a hunger strike to demand the suspension of the drilling that ruins their houses and pollutes the environment. Until now, no positive response has come from the governmental authorities or the company’s representatives.

In the summer of 2016 Bankers Petroleum began a process of selling its shares to the China based Geo-Jade Petroleum for $407 million, which is expected to take a definitive form in the days to come.

In any case, the history of Bankers Petroleum is just one example of the deterioration that the Albanian oil industry has suffered in the last decades of privatizations and concessions to private firms. One of the worst cases of privatization is that of the oil refinery of Ballsh, which has historically been used to refine the crude oil drilled in the areas of Patos-Marinzë, Kuçovë, etc. The company was privatized in 2008, amid serious allegations of corruption. An Albanian businessman close to the Albanian government became its owner, in consortium with a shadow firm from Azerbaijan. Unsurprisingly, the company did not fulfill its contractual obligations to increase investments and introduce new technologies for oil refining. This means that although the amount of oil in Albania has increased continuously from 2002 onwards, the oil is not refined properly in order to be used for car consumption in Albania. Even though Albania produces annually more crude oil that it consumes, oil for domestic consumption is imported due to the lack of proper refinement. The Albanian oil is sold in international markets for the making bitumen and other byproducts.

The workers of Ballsh have periodically protested the deterioration of their working conditions in terms of an increasing rate of accidents in work, delaying of wage payments and cuts in the workforces. After evading millions of dollars in tax obligations and being heavily indebted to banks, the ARMO company declared its bankruptcy in 2016. For almost eight months the oil refinery has been closed, and a quadrilateral conflict between the bankrupted firm, the banks, the Albanian government, and the workers emerged. In the spring of 2016 the workers and trade union of Ballsh organized a lot of protests in Ballsh and in Tirana. They have tried road blocks, and even the cutting off electrical energy in several cities near Ballsh by occupying for some hours the nearby electro-energetic station. 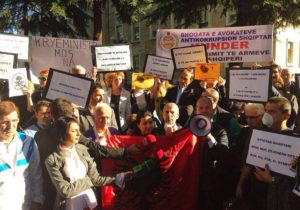 Due to their protests, which have received an outpouring of solidarity from student movements in Tirana, the workers of Ballsh have gained something. They forced the government to transfer the property to another firm and oblige it to make the necessary investments for putting the oil refinery back to work. The workers were promised to be given some of the monthly wages that the former company (ARMO) owed them. Nevertheless, recent interviews with Ballsh workers show that the actual firm which manages the oil refinery is not fulfilling all its obligations. This situation has exacerbated the relations between the workers of Ballsh and the trade union bureaucracy, which is now and then accused for being a covert accomplice to the company and especially the government. This is not surprising in a country like Albania, where the national leaders of the trade unions, due to power abuses, live in luxury comfort and drive fancy cars.

How did we get to this situation where oil production is monopolized by concessionary firms that privatize almost all the revenues from this natural resource and common wealth, and the oil refining process is not only privatized, but almost inefficient? Let’s have a look at history. Oil production in Albania starts in the twenties of the twentieth century, where very weak Albanian governments, under pressure to open the country’s natural reserves, gave concessions to foreign companies, firstly to the British and then to the Italians. Nonetheless the level of oil production before socialism was very low. The real expansion skyrocketed during state socialism, when, due to the technological help, first of the Soviet Union and then of China, Albania built a quasi-modern oil industry, with 34 factories for oil and gas production and oil refinement, with thousands of workers and engineers, institutions for scientific research, etc. In 1974 Albania reached its peak of oil production with 2.248.227 tons. Oil and chrome were the main exports of the socialist economy, whose revenues were largely used for building up the refining industry. The early nineties, with the fall of socialism, marked the beginning of the collapse. For almost ten years – due to closing down of factories and research institutes, and to underinvestment – the level of oil production decreased rapidly, reaching its lowest point in 2000, with only 314.304 tons/year. In the last decade, the attraction of foreign companies – despite the fact that they take the lion’s share from oil production – have increased oil productivity. But levels are still far behind 1974. In the most successful year, 2013, the oil production didn’t achieve more the 60% of the productivity of 1974. This says a lot about the effects of state and private mismanagement in capitalism.

What this contrast shows is that privatizations, concessions and other neo-liberal tricks have delivered none of what was promised. There have been no serious technological investments, but just adjustments to increase raw material excavation, profits have been hidden and taxes evaded, there has been no expansion of the working force; on the contrary, we have witnessed its numerical diminishing, and a deterioration of the working conditions, and last, but not the least, an increase in environmental pollution. Nevertheless, even though there are sparks of resistance among the working class of Ballsh and the inhabitants of the nearby villages of Patos-Marinzë, until now the different affected groups have not attempted to coordinate action.

oil production in Albania, by year